The capital of Azerbaijan is the focus of sculptural compositions, monuments to figures of art, science, politics, outstanding historical figures. Among them are not only Azerbaijanis, but also representatives of other peoples. In Azerbaijan, they respect both their compatriots and representatives of the world culture. This is evidenced by the numerous monuments that adorn Baku. Monuments to artists in Baku

If you carefully walk around the city, you will come across bronze and granite: Russian, Georgian, Ukrainian, Uzbek poets, Austrian and Romanian musicians, Swedish and Serbian scientists and many others.

The monuments in the publication are listed in the chronological order of their installation.

The opening of the new building of the Akhundov National Library in 1960 was a great event not only for book readers, but also for fans of monumental sculpture. Statues of figures of Azerbaijani and world culture were installed on the southern facade of the library.

In the suburb of Baku, in the village of Mardakan, on April 1, 1975, the memorial museum of the famous Russian poet Sergei Yesenin was solemnly opened. This museum became the first memorial museum dedicated to the life and work of Sergei Yesenin, created outside of Russia. In 1924-25, Sergei Yesenin stayed here and it was here that he wrote many of his famous poems, including “Persian motives”.

The museum is located on the territory of the arboretum, and a large bas-relief of the poet was installed from the side of the street. The street the central street of the village also bears the name of Sergei Yesenin. 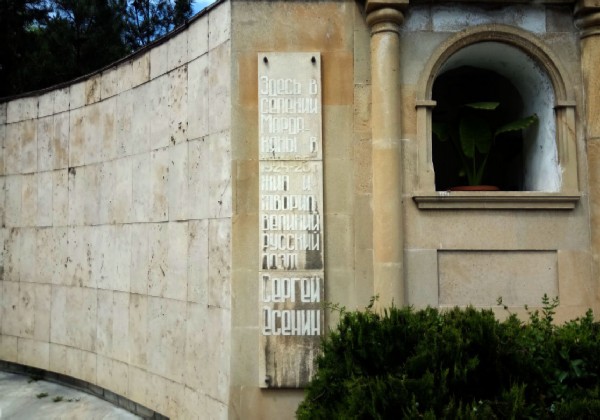 In 1981, a monument to the Hero of the Soviet Union Richard Sorge was erected in Baku. The famous scout of the Second World War, Richard Sorge was born in the suburb of Baku in the village of Sabunchi. He left his homeland early and did not have time to return here. But the people of Baku still keep the memory of him. The monument was opened for Victory Day in the Sorge Park. The sculptor of the memorial is Vladimir Tsigal, architects are Rasim Aliev, Leonid Pavlov, Yuri Dubov. 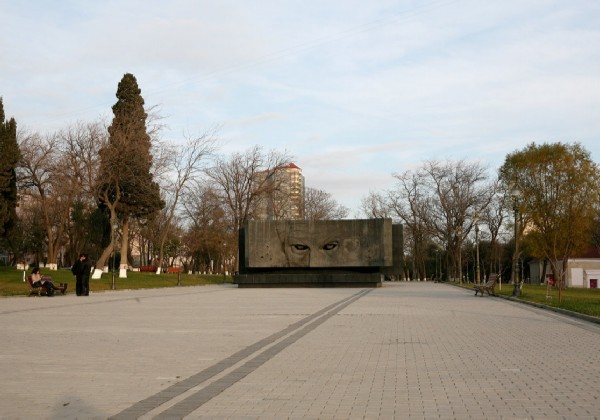 Born in the suburbs of Baku on August 26, 1897, Boris Vannikov became a prominent Soviet statesman and military leader. He was one of the few to be awarded the title of Hero of Socialist Labor three times. But since Vannikov was among the main participants in the Soviet nuclear program, the monument in his homeland was erected not during his lifetime, but with a delay of at least 20 years.

The memorial on Bailovo was opened on May 8, 1982. The ribbon was cut by the First Secretary of the Central Committee of the Communist Party of Azerbaijan Heydar Aliyev. 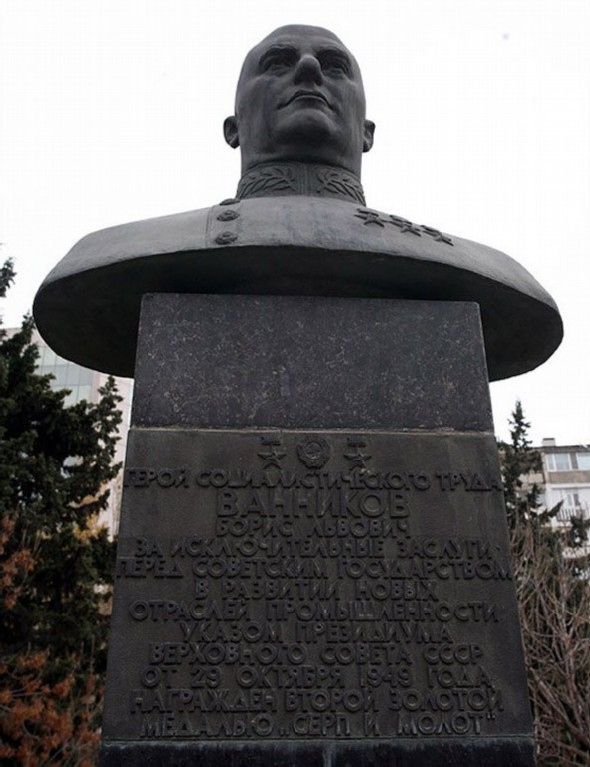 The monument to the great Russian poet was erected in the park on Pushkin Street in October 2001. The opening was planned for the 200th anniversary of the poet and during the visit of Vladimir Putin to Azerbaijan, but then it was postponed. The author of the sculpture is Yuri Grigorievich Orekhov, People’s Artist of Russia, Vice-President of the Russian Academy of Arts. The monument in Baku was the last work of Yuri Grigorievich and was installed after the death of the sculptor by his son, also a sculptor Grigory Orekhov.

On October 11, 2006, President of Azerbaijan Ilham Aliyev and President of Romania Traian Basescu solemnly opened a monument to the great Romanian musician George Enesco. The monument is the center of the park composition, located on Azadlig Avenue, where Jafar Handan Street crosses the avenue.

The 3.5-meter monument to the great Ukrainian poet was made of bronze by the Ukrainian sculptor Igor Grechanik and delivered to Baku at the expense of the Ukrainian philanthropist Sergei Bondarchuk. The difference between this Shevchenko memorial from others is that the poet is depicted as young. He holds in his hands his famous book “Kobzar”, the first edition of which was published when Taras Grigorievich was 26 years old. On the reverse side, the monument resembles a willow with roots the personification of Ukraine and the national root.

The monument in the park at the intersection of Azadlig Avenue and Bakikhanov Street was opened on June 30, 2008, President of Azerbaijan Ilham Aliyev and President of Ukraine Viktor Yushchenko took part in the ceremony. 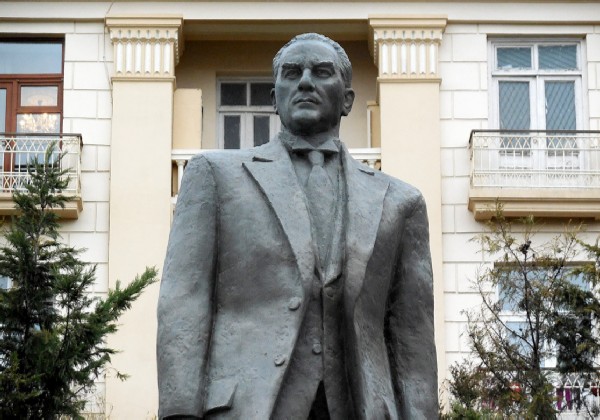 The monument to the great Uzbek poet and thinker Alisher Navoi was opened on September 12, 2008 in Baku, in a park located at the intersection of Azadlig Avenue and Najaf Narimanov Street. The opening ceremony was attended by President of Azerbaijan Ilham Aliyev and President of Uzbekistan Islam Karimov.

The author of the 4-meter monument is People’s Artist of Uzbekistan Jalalitdin Mirtadzhiev. The height of the memorial with a pedestal is about 6 meters.

The monument to the brilliant Austrian composer Mozart was erected in a new public garden on Stroiteley Avenue, the authors of the memorial are People’s Artist, sculptor Natig Aliyev and Honored Art Worker, architect Chingiz Farzaliev. The opening ceremony, which took place on October 12, 2011, was attended by President of Azerbaijan Ilham Aliyev and Federal President of Austria Heinz Fischer.

The monument to the outstanding Serbian inventor Nikola Tesla was erected in Baku in a garden at the intersection of Azadlig Avenue and Suleiman Rahimov Street, next to the railway station. The authors of the bronze monument are People’s Artist of Azerbaijan Omar Eldarov and architect Sanan Salamzade. The monument is installed against the background of a decorative panel depicting one of Tesla’s main inventions an alternator. The opening ceremony of the monument on February 8, 2013 was attended by President of Azerbaijan Ilham Aliyev and President of Serbia Tomislav Nikolic.

Nikolai Baibakov was an outstanding statesman who stood at the origins of the oil and gas industry of the USSR, deputy chairman of the USSR Council of Ministers and chairman of the USSR State Planning Committee. Nikolay Baybakov was born on March 6, 1911 in the Baku village of Sabunchi. To the 106th anniversary of Nikolai Konstantinovich in 2017, there, at school N67 named after I. N. Baybakov, a bust was opened.

At the turn of the 19th-20th centuries, the Nobel Brothers Oil Production Partnership became the main player in the field of the Baku oil boom. Numerous technical achievements in the Baku oil industry are associated with the Nobels. The Nobels built the first oil pipeline, built the first oil tanker. The most famous of the brothers, Alfred, has never been to Baku (Robert, Ludwig, then Ludwig’s son Emmanuel worked here), but Alfred actively participated in the work of the partnership, helping the brothers with advice and finances.

The monument to the great humanist and man of the world Alfred Nobel was opened at the initiative of the head of the Baku Nobel Heritage Fund Togrul Adilevich Bagirov. The memorial was erected on the territory of the Nobel Oil Club and the Villa Petrolea Museum on October 15, 2018.

The author of the monument is the sculptor Fuad Salaev.

The national hero of Azerbaijan, the commander of the tank, Albert Agarunov, died a heroic death on the outskirts of the Azerbaijani city of Shusha, in a battle for the independence and territorial integrity of Azerbaijan.

The monument to Albert Agarunov was erected at the initiative of the commander of his tank battalion, Haji Azimov, in 2019. The authors of the sculpture are teachers of the Academy of Arts Rahib Garayev and Zamik Rzayev. It is reported that the authors refused the fee for the monument.

The opening ceremony was attended by Deputy Defense Minister of Azerbaijan Kerim Veliyev, Israeli Ambassador to Azerbaijan Dan Stav, Chairman of the State Committee for Work with Religious Organizations Mubariz Gurbanli, Head of the Executive Power of Shusha District Bayram Safarov, representatives of the Organization of War, Labor and Armed Forces Veterans of the Republic of Azerbaijan, religious communities of Mountain Jews, relatives of the National Hero, his comrades in arms, officials.