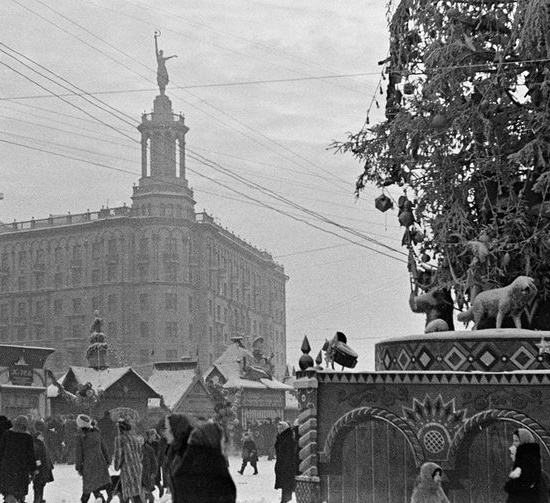 Outstanding ballerina Olga Lepeshinskaya monuments
Once, the statue of the “ballerina” adorned the house on Tverskaya Street (former Gorky Street) in Moscow. However, the authorities removed the monument 60 years ago, in 1958. According to one version, because the rulers did not like to drive “under the skirt”.
Meanwhile, the local historians state that the statue depicts a ballerina Olga Lepeshinskaya, who allegedly lived in the same house. In favor of this version, was the fact that Stalin, who determined the appearance of Gorky Street, often visited the productions with her participation.
However, four times Stalin prize winner Lepeshinskaya herself denied this fact. Here is her answer: “I never lived there and nobody sculpted a statue from me. But the fact is that at the beginning of the war I was on duty on this roof, extinguished German lighters.”
END_OF_DOCUMENT_TOKEN_TO_BE_REPLACED 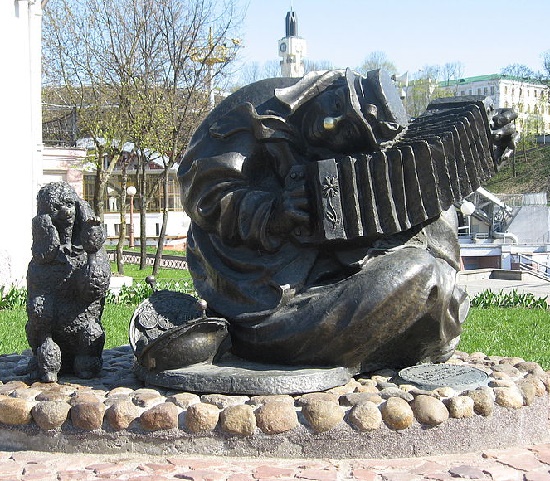 Behind Clown monuments
A stray musician monument, also known as the Street Clown, became a gift to Vitebsk from the Honored Artist of Russia, head of the incredibly strange circus Nikolai Chelnokov. The work created by Vitebsk sculptor Ivan Kazak.
In particular, the monument is a figure of a good-natured clown who plays the accordion, and a poodle dancing next to him. Meanwhile, since the appearance of the monument, it immediately acquired legends and beliefs. And one of the most popular of them is the following: if you touch the accordion, then you will have a good mood for the whole day. Also, to be lucky all day – you need to say hello to the poodle, touching its paw. Besides, if you rub the money, peeping out of the back pocket of a wandering musician – you will have a financial luck.
END_OF_DOCUMENT_TOKEN_TO_BE_REPLACED 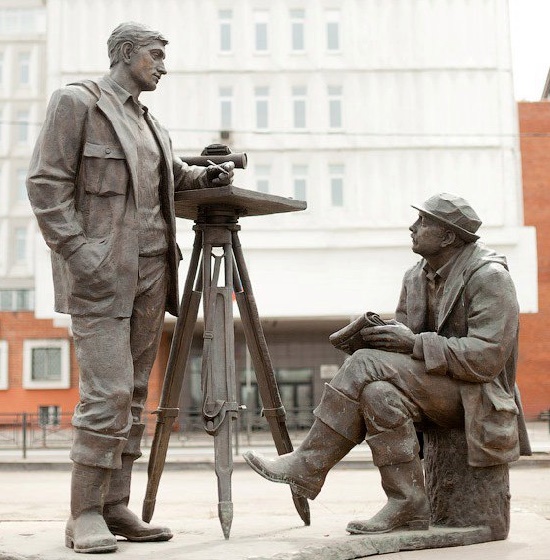 Geologists pioneers monuments in Russia
September 28, 2012 in Irkutsk appeared a sculpture “Geologists.” It decorates the bank of the Angara River in the historical center of Irkutsk. Sculpture, devoted to the hard, but romantic and noble profession of the geologist, is a work of young sculptor from Krasnoyarsk, Yevgenia Druzhina. A native of Irkutsk, she embodied in the metal easily readable images of geologists.
Meanwhile, in the world, as it turns out, there are lots of sculptural images, obelisks, stelae, commemorative signs dedicated to the severe profession of a geologist. However, in Russia, they are few. In particular, in the Siberian and northern territories, such as Surgut, Urengoi, Nefteyugansk, etc.
END_OF_DOCUMENT_TOKEN_TO_BE_REPLACED 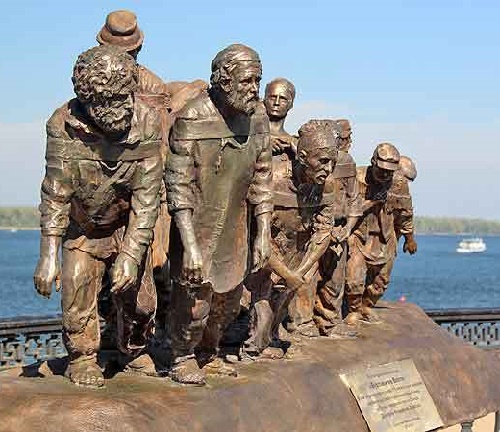 Barge Haulers on the Volga monument in Samara
September 11, 2014 – The bronze sculptural composition “Barge Haulers on the Volga” was inaugurated at the Samara embankment to 170-year anniversary of the artist Ilya Repin. The author of the composition became Samara artist Nikolai Kuklev. Sculpture is a visualization of the famous painting: a bronze frame, easel, which depicts boat haulers and, set against the natural landscape of the Volga. The painting has dimensions of 131.5 × 281 cm and is in the Russian Museum in St. Petersburg. The sculpture – about 1.5 m, the pedestal height – about 1 m. In 2014 Russia and, in particular, Samara, celebrated 170 years since the birth of Russian painter Ilya Repin. The history of one of the most famous works of the artist “Barge Haulers on the Volga” related to his stay in the village of Samara and Shiryaevo (Samara region).
END_OF_DOCUMENT_TOKEN_TO_BE_REPLACED 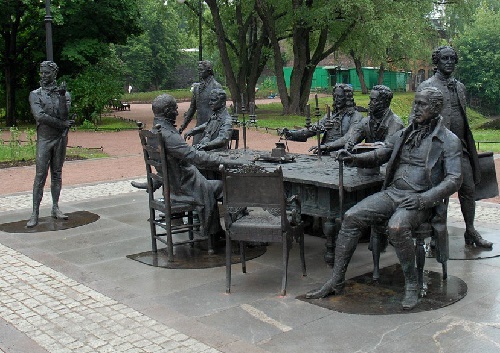 Eight famous architects monument in St. Petersburg has become a tribute to the great architects for their contribution to the city. Indeed, their role in the development of architecture of the northern capital of Russia is great. The sculptural composition now decorates the Alexander Park of St. Petersburg. It depicts eight most famous architects: Voronikhin, Bazhenov, Auguste de Montferrand, Trezzini, Thomas de Thomon, Rossi, Rastrelli and Zakharov. The intention of the author brought them to the map of the city, and placed around their creations in miniature: St. Isaac’s Cathedral, Stock Exchange with Rostral columns and the Admiralty. By the way, one of the chairs is free. So, any visitor can sit down and symbolically participate in the discussion of the city plan. They say, that it helps those who do not have enough inspiration for creativity.
END_OF_DOCUMENT_TOKEN_TO_BE_REPLACED 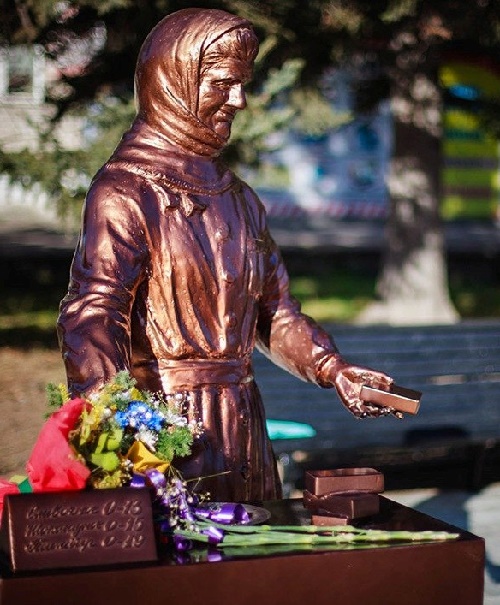 Almost the entire adult population of Blagoveshchensk remember Ice-cream seller Zinaida Sinitsyna. Sixteen years she sold ice lollies on one and the same place – in front of the Drama Theatre, under the three poplars that grow on Lenin Street to this day. Grandma has become a symbol of childhood for many citizens of Blagoveshchensk. She was almost fairy-tale hero, and even a legend. She worked from early morning till late night, until the last bus was leaving. And young people, returning from the park of culture used to talk to her, waiting for a bus. She said that sometimes in the summer, she had to spend the night, guarding her unsold boxes with ice cream. It seemed she would be forever. And so it happened. She has remained in the memory of citizens forever. According to sculptor Valery Razgonyaev, it is a monument to our childhood.
END_OF_DOCUMENT_TOKEN_TO_BE_REPLACED 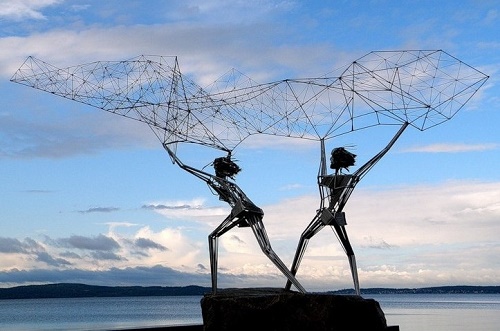 Monument “Fishermen” – the original sculpture, installed in 1991 on the shore of the Petrozavodsk bay of Lake Onega, Petrozavodsk. Author of the composition – sculptor Rafael Consuegra from the twin city of Duluth, Minnesota, USA. Rafael Consuegra was directly involved in the installation and welding of structures that have been made on the Petrozavodsk machine plant. According to the author, the composition of two fishermen with the net should become a symbol of the joint Russian-American creative labor. It should be noted, it was the difficult year of the collapse of the USSR. At first, residents of Petrozavodsk reacted skeptically to the present, as the fishermen seemed weird and even suspicious to them. In addition, made of metal rods fishermen, and especially the net in their hands looked like a spy antenna …
Fortunately, time has shown the sincerity of intentions of the authors of the monument, and “fishermen” have become one of the most visited sights of the city.
END_OF_DOCUMENT_TOKEN_TO_BE_REPLACED