On June 22, 1941, the troops of Nazi Germany, without a declaration of war, suddenly attacked the USSR border and inflicted bombing air strikes on Soviet cities and military formations. The Soviet people, united as one, rose to defend their homeland. Hundreds of thousands of Azerbaijanis went to the front and contributed to the victory over fascism. In memory of the heroes and events of World War II, streets were named in Azerbaijan, parks were laid out, and numerous memorial complexes were erected. Day.Az with reference to vestnik.az presents ten of the most famous monuments in Azerbaijan, and today they remind of the events of 1941-1945. 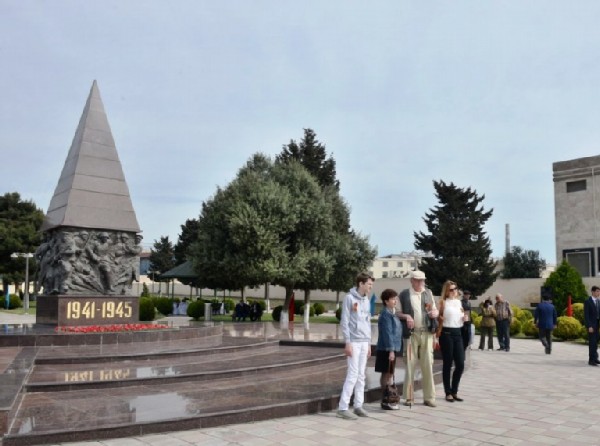 The memorial complex “Mass Grave” was created after Azerbaijan gained independence. As you know, one and a half million Soviet soldiers received treatment and were raised to their feet in hospitals in Azerbaijan. On the territory of the memorial complex, 1462 soldiers are buried, who died during the war in hospitals in Baku. Among the buried there are representatives of various nationalities. On May 9, solemn events are held at the memorial, as well as international actions “Immortal Regiment”.

This monument is located near the Russian Embassy in Azerbaijan and is dedicated to an important historical date. Azerbaijan made a great contribution to the victory over fascism 681 thousand people went to the front, most of them died on the battlefields. For the deeds performed during the war, 128 natives of Azerbaijan were awarded the title of Hero of the Soviet Union.

The legendary Soviet intelligence officer Richard Sorge was from Baku. It is known that he was the first to receive reliable information about the preparation of the German invasion and warned Stalin about the impending catastrophe, but he did not listen to it. In 1981, a monument to Sorge was erected in Baku: it was made in the form of an oblong, curved bronze plate resembling a radar installation, in the center of which there is a relief image of the middle part of Sorge’s face with eyes cut through. His focused and studying gaze seems to penetrate the person. In this generalized, conventional image, the sculptor Vladimir Tsigal tried to create a symbol of the Soviet intelligence officer.

At the entrance to the Martyrs’ Alley, there is a monument to the Soviet military leader, hero of the Great Patriotic War, commander of a tank division Hazi Aslanov. The 55th separate tank regiment, which he commanded, played a significant role in the defeat of the Nazi troops at Stalingrad. For his heroism and courage in these battles, Hazi Aslanov was awarded the title of Hero of the Soviet Union, and his regiment became a Guards regiment. In 1944, he was appointed commander of the 32nd tank brigade and was promoted to major general of tank forces, took part in the battles for the liberation of Belarus and the Baltic states. In January 1945, in the battles on the outskirts of the city of Mitava, Aslanov heroically died in a fierce battle. The famous tanker was buried in Baku.

A native of Azerbaijan, Mehdi Huseynzade was a Soviet lieutenant, partisan and intelligence officer, famous for his daring operations against the German-Italian invaders in Yugoslavia and Italy. He headed a sabotage and reconnaissance group at the headquarters of the People’s Liberation Army of Yugoslavia and became known under the partisan pseudonym “Mikhailo”. An Azerbaijani intelligence officer died in Slovenia and received the posthumous title of Hero of the Soviet Union. In 1973, a monument to Mehdi Huseynzade was erected in the park on Bakikhanov Street. The expressive figure of a partisan in a fluttering cloak and with a grenade in his right hand stands on a rough block of granite.

Habibulla Huseynov was the commander of the 67th Anti-Aircraft Artillery Division (39th Army, 3rd Belorussian Front). He took part in the battles in the Byelorussian SSR and East Prussia, the battle for the Caucasus, and the liberation of the Baltic. The actions of the division and Huseynov personally contributed to the successful fulfillment of the combat missions assigned to the army. The illustrious colonel died heroically in battle 26 days before the end of the war. He was buried in the officers’ cemetery in the city of Marijampole (Lithuania) and posthumously received the title of Hero of the Soviet Union. A monument to Habibulla Huseynov has been erected in Baku, as well as a monumental complex in memory of compatriots who died during the war.

Hero of the Soviet Union Giray Asadov was a rifleman of the Kharkov Infantry Division of the 27th Army of the 2nd Ukrainian Front. He participated in the battles on the Kursk Bulge, in the liberation of the Right-Bank Ukraine, Moldova, and distinguished himself in battles on the territory of Romania. In the last battle, having exhausted all the possibilities to destroy the enemy’s firing point, Guard Sergeant Asadov closed the embrasure of the enemy bunker with his body. A monument to the guard sergeant Geray Asadov was erected in his hometown of Beylagan.

The memorial complex for those killed in World War II in the city of Gusar opened after reconstruction two years ago. In the center of the memorial there is a monument to Mahmud Abilov, who made his way from an ordinary soldier to a combat general of the war. The formations commanded by Abilov have repeatedly successfully solved the command’s combat missions in defensive and offensive operations. The Major General commanded the 250th Infantry Division and walked a glorious path from Demyansk to Berlin itself, to the Elbe River, where he met with the allies in the anti-Hitler coalition with the Anglo-American troops.

The “Unknown Soldier” memorial was erected in the city of Lankaran. During the war years, many residents of the southern region of the country went to the front some of them died on the battlefield, others returned to their homeland and participated in the restoration of their land. In turn, the Hero of the Soviet Union Hazi Aslanov was born in Lankaran, who made an invaluable contribution to the victory over fascism.

This memorial in memory of the participants in the war was erected in one of the villages of the Ismayilli region. It depicts a mother and son waiting for the head of the family, who went to the front. Residents of Lagich all as one responded to the tragedy in 1941, volunteering for the front. This memorial once again shows Azerbaijan’s respect for its history.