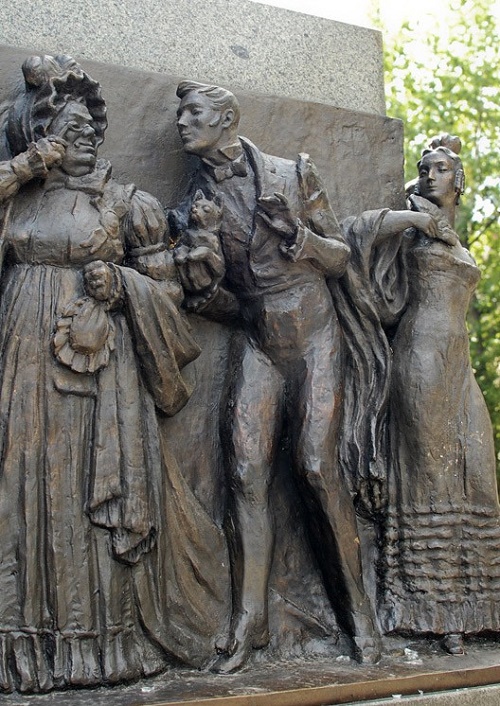 There is a book that many people did not read, but know it, and almost all without even knowing it. Because phrases from the book have become winged, and even went to a number of proverbs and sayings. For example, “Happiness takes no account of time”, or “Of all worst troubles, let lordly anger and lordly love avoid us”. All this is about the comedy in verse “Woe from Wit” by Alexander Griboyedov, the great Russian writer. No wonder, after hearing it for the first time, Pushkin said, “Here, each line will go into a proverb.”
Great writer Alexander Sergeyevich Griboyedov is the author of “Woe from Wit”, and the monument has immortalized his comedy. Around the pedestal, due to heavy folds of a theater curtain, are a string of his characters: smug and pompous gentleman Famusov; goofy, zealous campaigner Skalozub; malicious gossip Hlestova; obsequious Molchalin, prudent and limited Sophia; and cunning maid Lisa … Away from this company aspires Chatsky. He is full of anger and despair. And Griboyedov, attentive, mocking, standing on a pedestal, tilting his head slightly, as if listens to the voices of their characters. And the memorial plate reads: ‘Monument erected in 1959. Authors – sculptor A.A. Manuilov, architect A.A. Zavarzin, cast V.V. Lukyanov’. 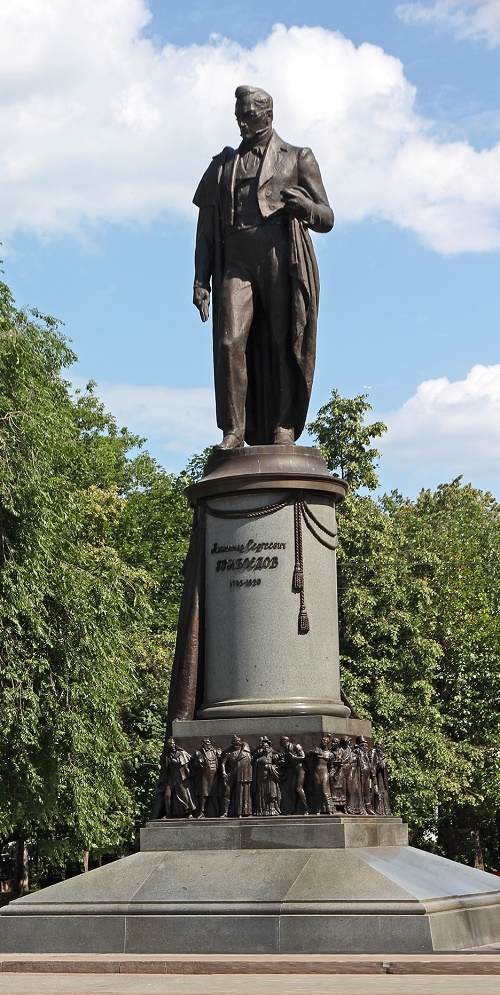 Moscow monument to Alexander Griboyedov and his characters

The current monument was installed in 1959, on the 130th anniversary of the tragic death of the writer. The place was not chosen by chance, as Alexander Griboyedov lived for a time in a few minutes’ walk from this place – the house number 42 on Butcher Street. The sculpture depicts the writer’s deep in thought. At the bottom of a round pedestal, a half-open curtain depicts the characters of the play of Griboyedov “Woe from Wit”. 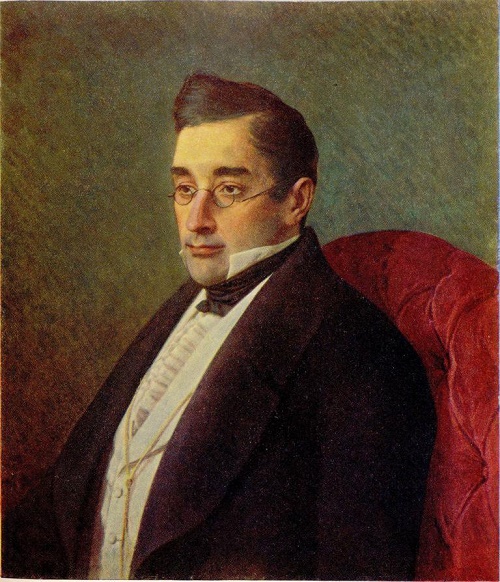 Alexandr Griboyedov – Russian diplomat, playwright, poet, and composer (15 January 1795 – 11 February 1829). He was Russia’s ambassador to Persia, where he and all the embassy staff were massacred. 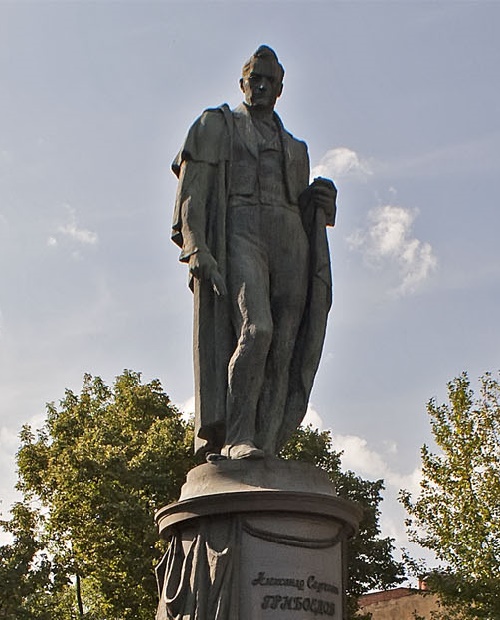 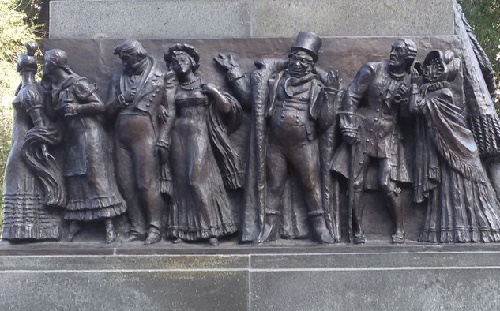 At the bottom of a round pedestal, a half-open curtain depicts the characters of the play Griboyedov Woe from Wit

Characters of Woe from Wit 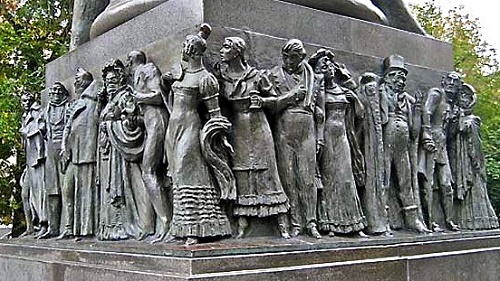 Detail of Woe from wit monument 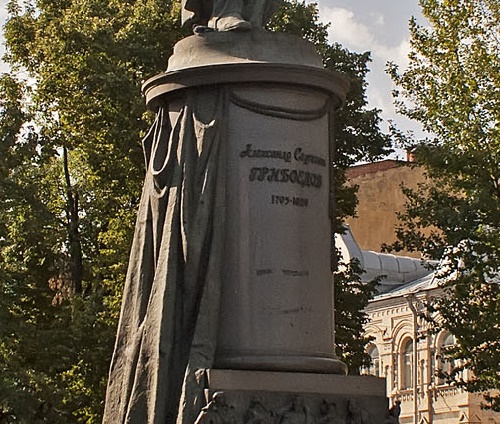 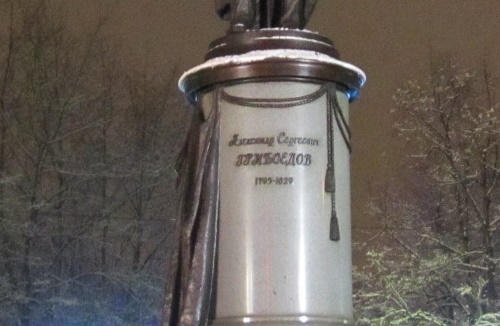 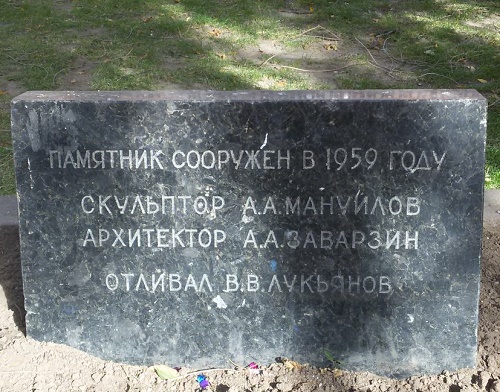 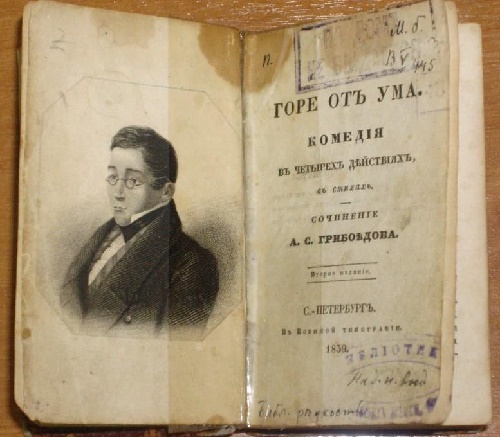 The old book of comedy verses 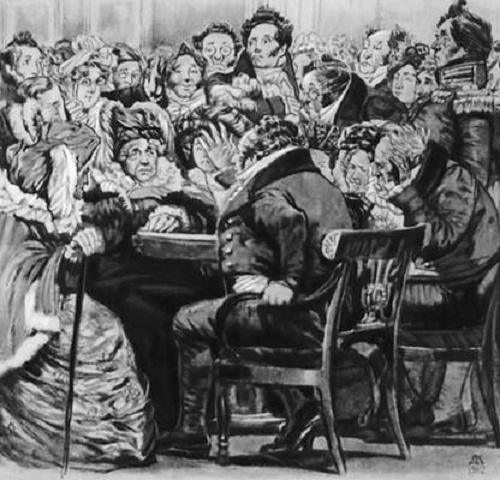