They say a cat Totti could not live without his mistress, a Finnish poet Edith Irene Södergran, who lived in the village of Raivola (currently Roshchino, Leningrad region, Vyborg District). When the poet died of tuberculosis, Totti came to her grave and did not go away, did not eat or drink, and soon died. Perhaps, this devotion became the reason for the installation of the monument. Author of sculpture – Nina Terno. 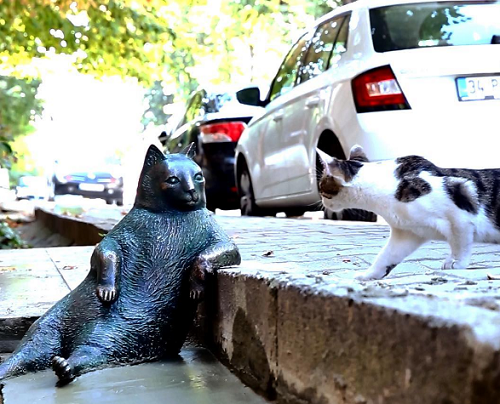 A cat is surprised to see the cat monument. Stories behind Cats monuments

In Istanbul lived a cat named Tombili, who liked to sit thoughtfully, one paw resting on the curb. Due to this relaxed position, the fat cat became known worldwide after the publication of photos, where he was sitting with his elbows on the step of the sidewalk. According to local residents, the cat was known for his cool and careless behavior of people, even when trying to play with him. Unfortunately, he died on August 1. But fortunately people didn’t forget the internet famous celebrity! Two months later, October 4th, on World Animal Protection Day, the animal in the famous pose appeared as a sculpture. The sculptor Seval Sahin created the monument at his own expense. The monument was erected in the alley, in the same place where the iconic photo was done. 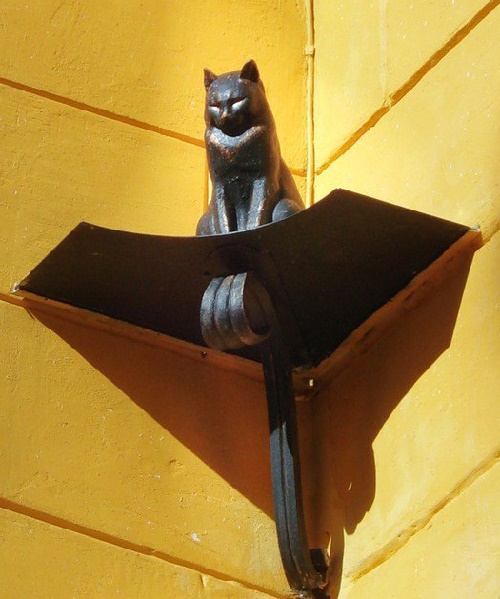 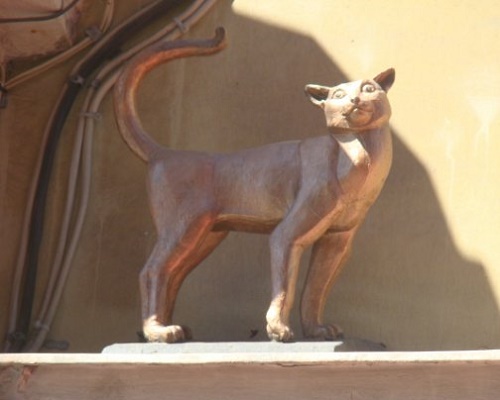 Cat Vasilisa sits on the second floor on the eave of house number 3 on Malaya Sadovaya, and opposite the house number 8 sits cat Yelisey, watching passers-by. This monument to Yaroslavl cats that saved Leningrad from the hordes of rats in the blockade. And, of course, they will help to fulfill the desire, if to throw the coin up to the eaves. 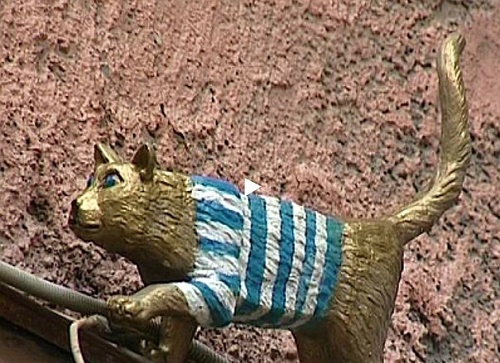 On the eaves of the attic on 16 Pravda Street, where was the studio of artist’s “Mitki”, is walking by itself Tishina Matroskina – the famous cat. The day of sculpture installation, 8 June, declared a holiday – “Day of St. Petersburg cat.” In 2007, Tishina Matroskina moved to Marat street, house 34, together with the artists. 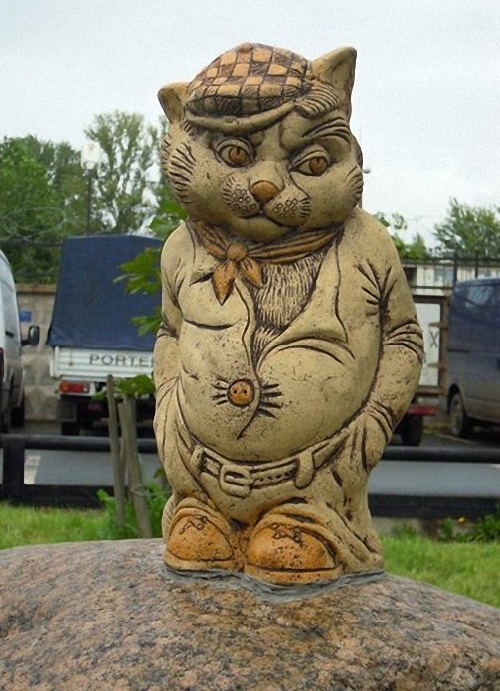 A cool cat on a rock. 24, Kanonersky Island, St. Petersburg

First of all, the name of island “Kanonersky” has Finnish origin (Kissaisaari means Cat Island). To commemorate this, the sculpture was installed in front of the offices of the port of the island. Cat of Kanonersky island – is a real hooligan boy dressed in trousers, shirt, neck scarf, hat, and boots. 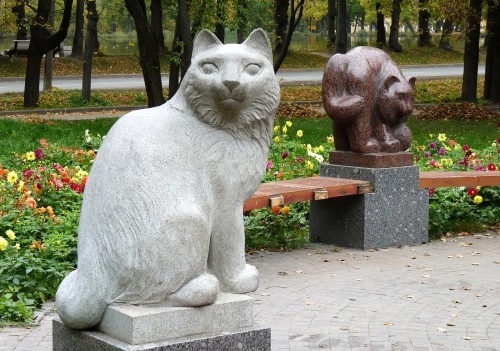 Near the Red pond settled three granite cats on the benches. It is always possible to talk with them, scratch behind the ear, and even make a wish. You just should whisper a wish into cat’s ear. People ask white cat for peace in the family, the black cat – for protection from enemies and from the beautiful red cat they ask for courage and determination. These amazing cats were presented to Peterhof by sculptor Nikolai Karlykhanov. 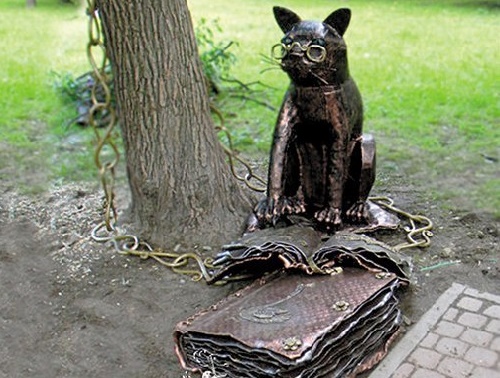 Forged cat Scientist is located between the school and kindergarten. Before the cat – books, one of them says: “Happiness is where you are.” And if you make a wish and rub the cat glasses, the wish will come true. Best of all, this sign works if the desire relates to education. 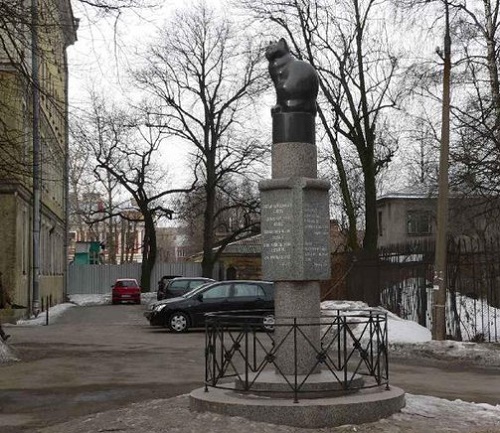 On the granite pedestal carved sayings about cats by Konrad Lorenz, Bernard Shaw and other celebrities. Opening of the monument took place on November 14, 2002 in the courtyard of St. Petersburg State University main building. The inscription on the monument reads: “Humanity must be infinitely grateful to the cat, which gave the world a great many primary discoveries in physiology.” The sculptor of the monument A.G. Dyoma. Architects S.L. Mikhailov and N.N. Sokolov. 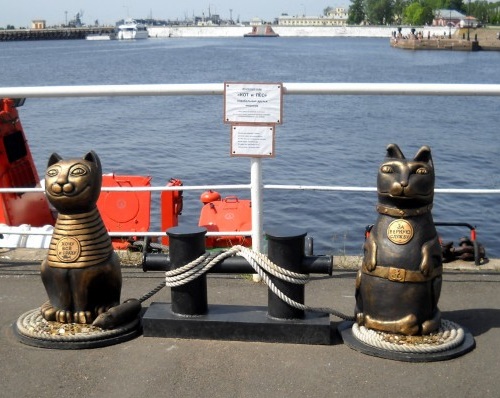 A friendly couple made of wood, painted bronze meets all arriving at Kronstadt on the water. On the cat’s chest – “medallion” with the words “I want everything at once,” and the dog – a medal “for faithful service.” And cat welcomes guests with poetic wishes:
I wish you health and love,
Prosperity in the house, dream fulfillment,
And not to live from paycheck to paycheck.
And if you suddenly stumble
Then, fall as cats do:
Easy and gentle – on four paws.

Funny memorial sculpture installed on the Winter pier of Kronstadt July 1, 2012, the Day of Workers of Marine and River Fleet of Russia. Author – local historian, and tour guide Alexander Yeskov. 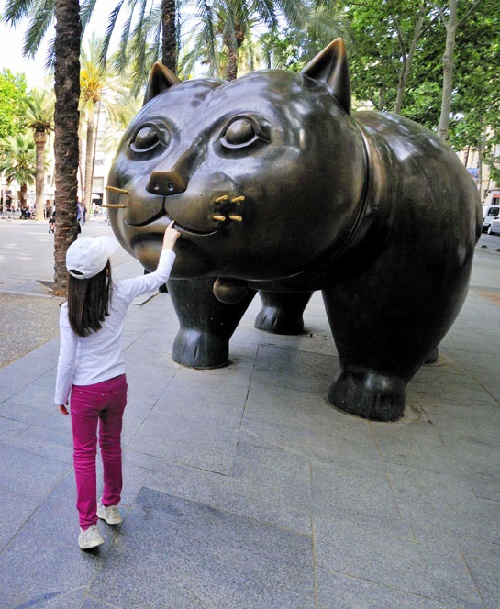 Two-ton bronze fat cat, creation of Colombian sculptor Fernando Botero, was “wandering” 15 years on the streets of Barcelona in search of a decent place. In 2003, the big cat with a boyish face and a well-defined attributes of masculinity acquired a house on the Rambla del Raval street, the area of artists, musicians and tourists. Passers-by rub its nose for good luck.

Samuel Johnson, scientist, poet and critic of the Enlightenment who made the Dictionary of the English Language in 1755, had a cat named Hodge. The glory of the owner extended to the cat – poets dedicated poems to him. Sculpture in front of the house-museum depicts cat Hodge sitting on a dictionary. Before the cat – oyster shells: Johnson fed his cat Hodge with oysters. On the monument are engraved the words of the master: “A very fine cat indeed.” 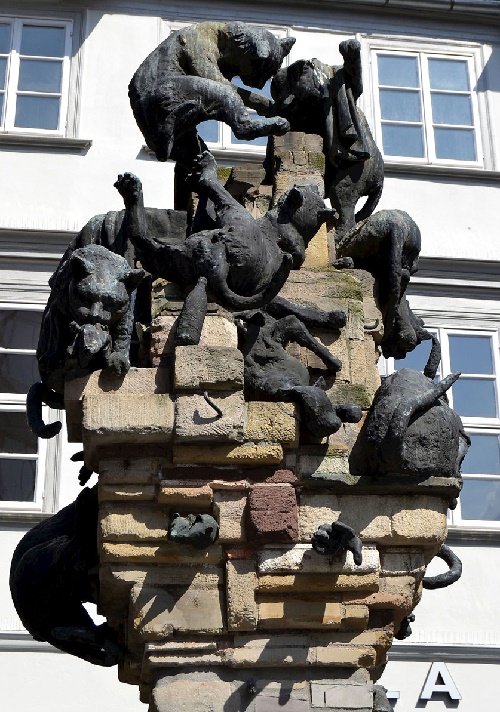 Column with playing and fighting cats – the most unusual monument in the city. Passersby see it as a symbol of peace-loving attitude to the homeless cats. But the sculptor Siegfried Neuenhausen is not so simple. Many of his creations are devoted to social and political problems. So, this hints at human behavior. 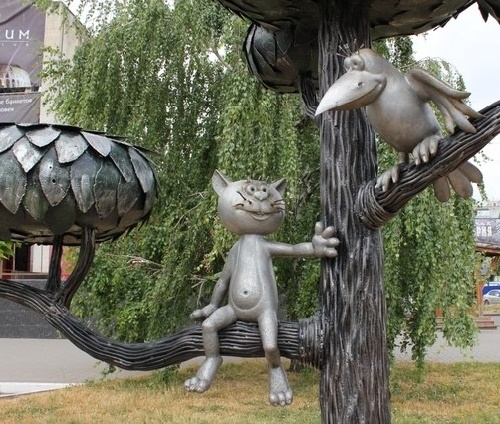 Monument to the kitten from Lizyukov street in Voronezh 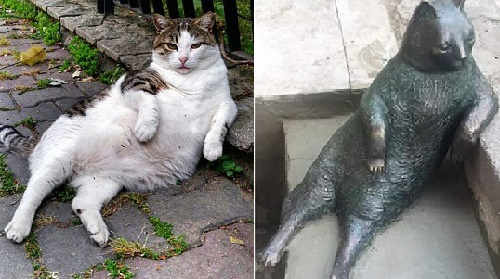 Sculpture of a cat in Istanbul 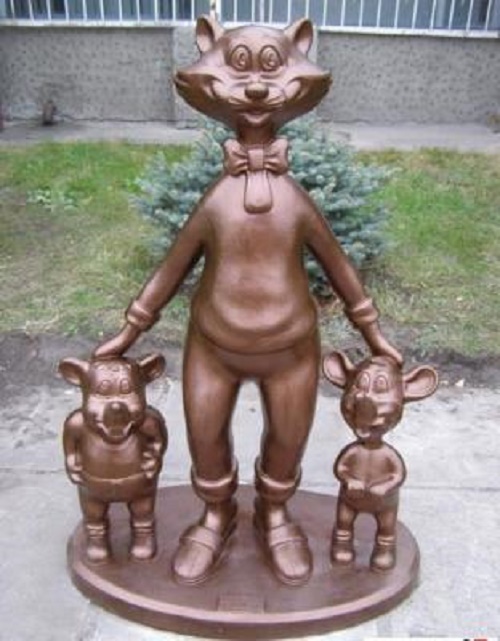 Komsomolsk, Russia. Monument cat Leopold, based on the Soviet cartoon 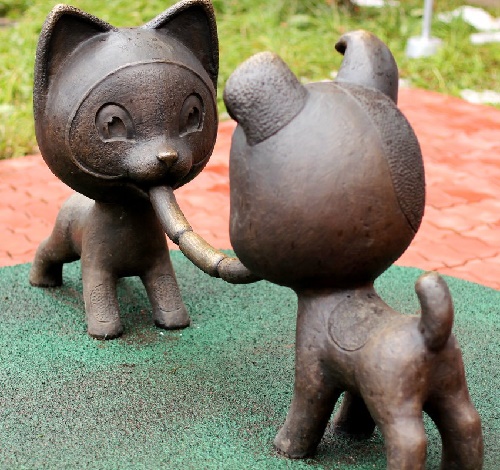 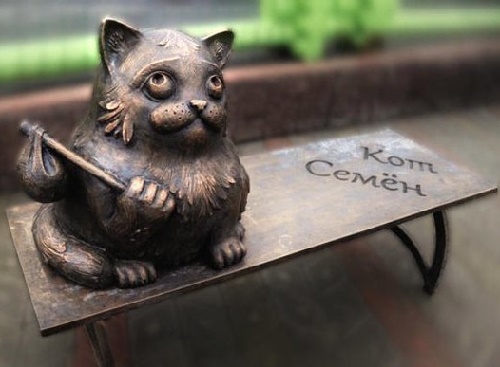 Murmansk, monument to cat Semyon. The Cat Lost in Moscow has passed distance of 2000 km to his home town of Murmansk, and It took him 6.5 years 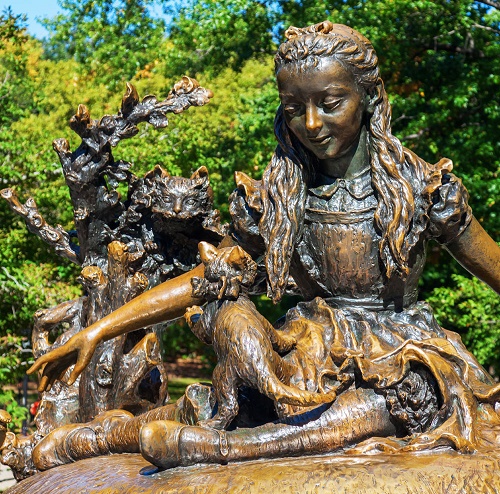 Sculptural group of characters of “Alice” in Central Park is set specifically for children: to climb Mushroom and pat cats. They are two: on the tree – Cheshire Cat and on Alice lap – her favorite Dean. New York 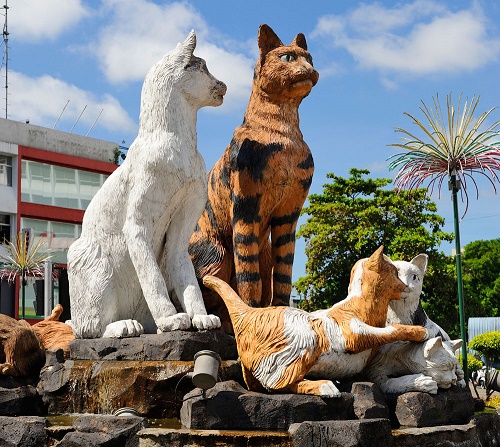 The name of the city, according to one version, translated as “cat.” And there are many statues of cats. The most photographed is this multi-figure composition – Mother, father and seven kittens. Kuching, Borneo, Malaysia 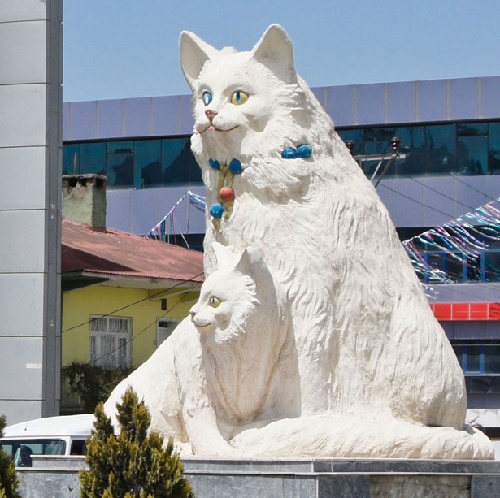 an cats – symbol of the city of Van. Turkish special breed often distinguished by white color and different colored eyes. A five-meter monument of cats with kittens welcomes visitors 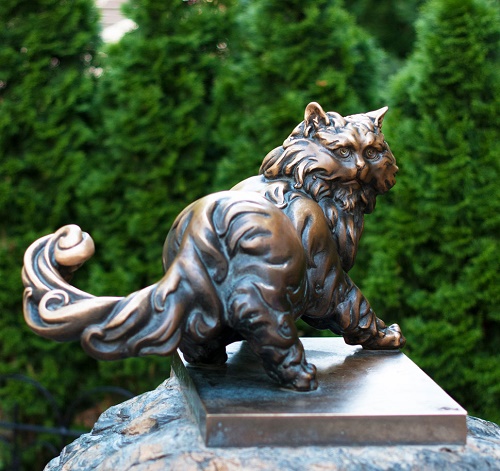 Monument to a real Persian cat Panteleimon was installed next to “Pantagruel” restaurant. The cat died there in a fire in the late 1990s. According to legend, the cat has warned people about the danger. Kiev, Ukraine 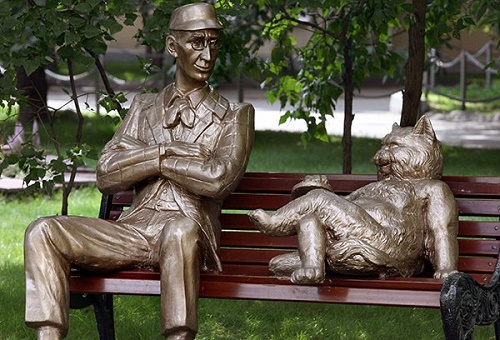 Cat Behemoth and Korovin, the characters of Mikhail Bulgakov’s The Master and Margarita. Moscow 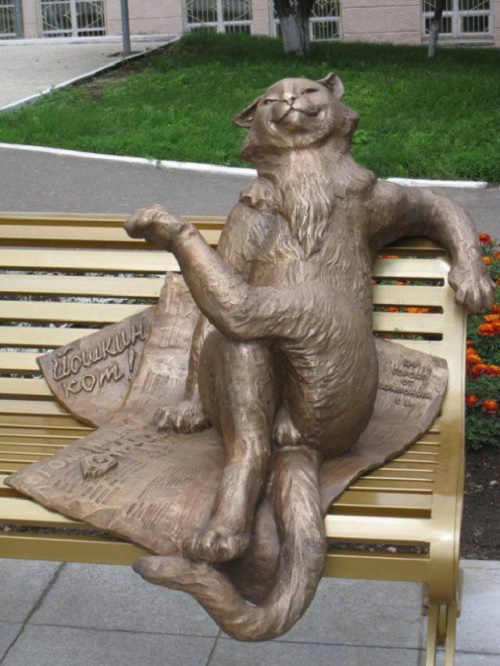 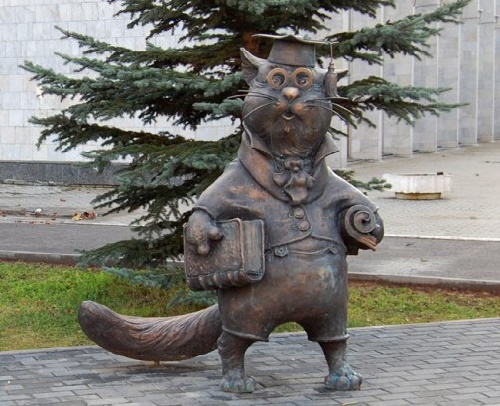 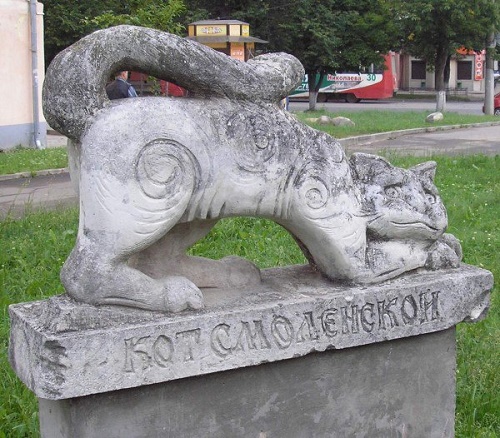 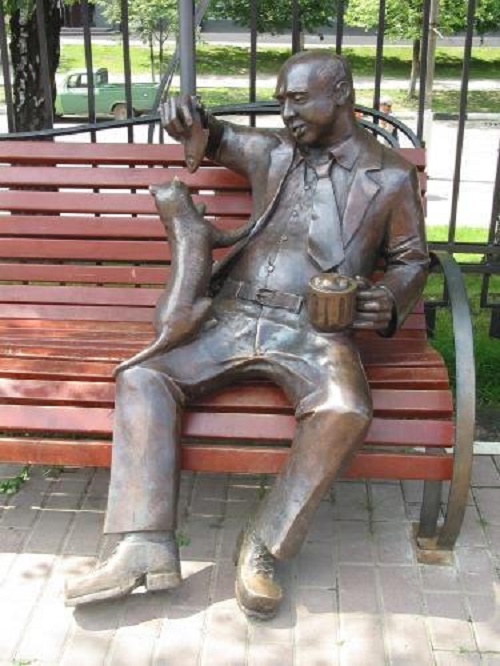 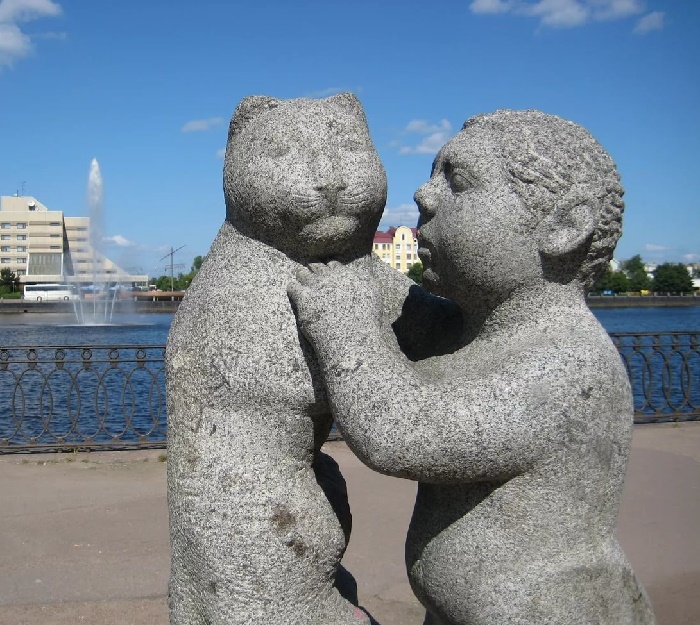 A boy with a cat. Vyborg (Leningrad region) 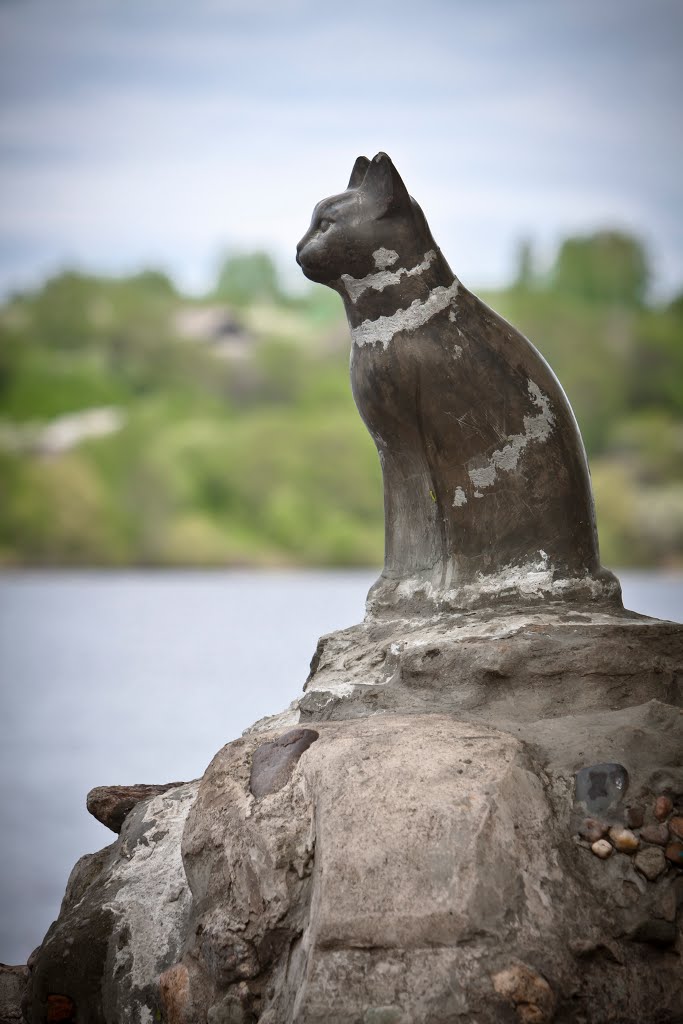 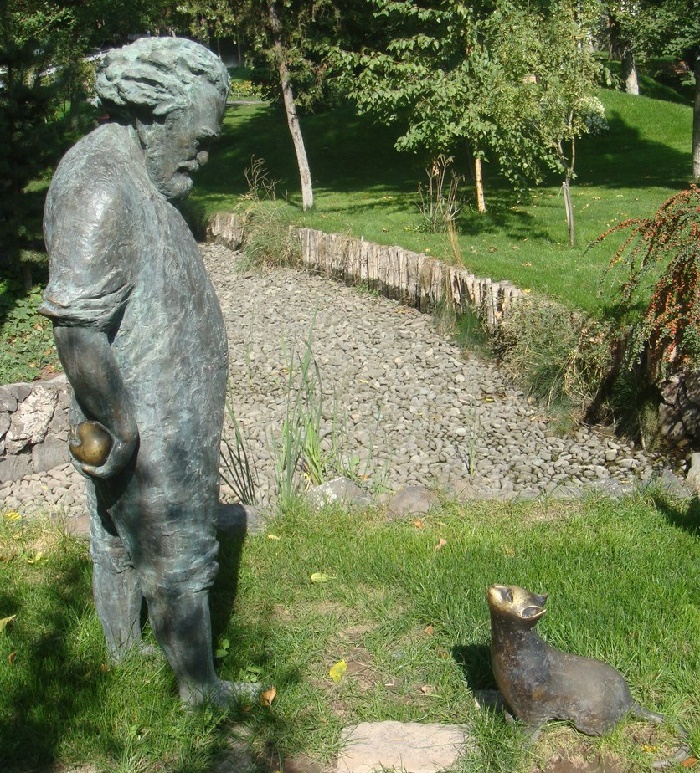 Just a cat asking for food. Sculptural composition in one of the parks in Yerevan, Armenia. Photo by Dmitry Larionov