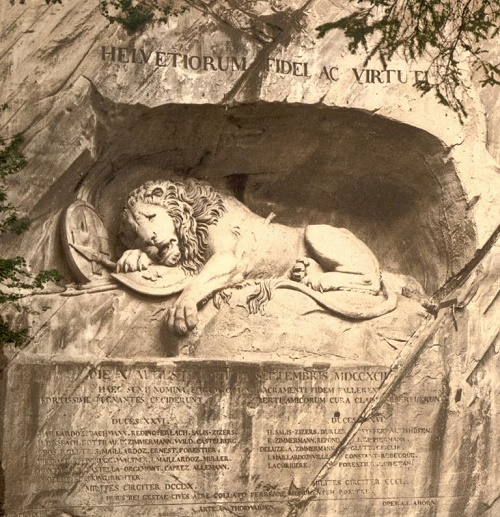 Mortally Wounded Lion Monument
A rock relief, an allegorical composition, which Mark Twain once called “the most mournful piece of stone in the world”, is near the lake in Lucerne, Switzerland. Sculptors Bertel Thorvaldsen and Lukas Ahorn 1820- 1821 are authors of this nine-meter statue in a niche of 13 meters long and 6 meters high. The mortally wounded Lion is lying with its head on the right paw, resting on the shield with the image of a lily – a symbol of the king of France, whom the guards heroically defended. At the head of the lion is another shield – with the emblem of Switzerland. Interestingly, the mimicry of the noble animal expresses his almost human suffering, shown romantically symbolic and artistically convincing. Noteworthy, the left shoulder of the lion – pierced with a spear. The carved in Latin above the rock bas-relief inscription reads:
HELVETIORUM FIDEI AC VIRTUTI, which means «Loyalty and courage of the Swiss”. And the below bas – Latin numerals 760 and 350, corresponding to the number of dead and surviving soldiers. At the foot of the monument – carved the names of soldiers and officers who gave their lives in the name of duty. 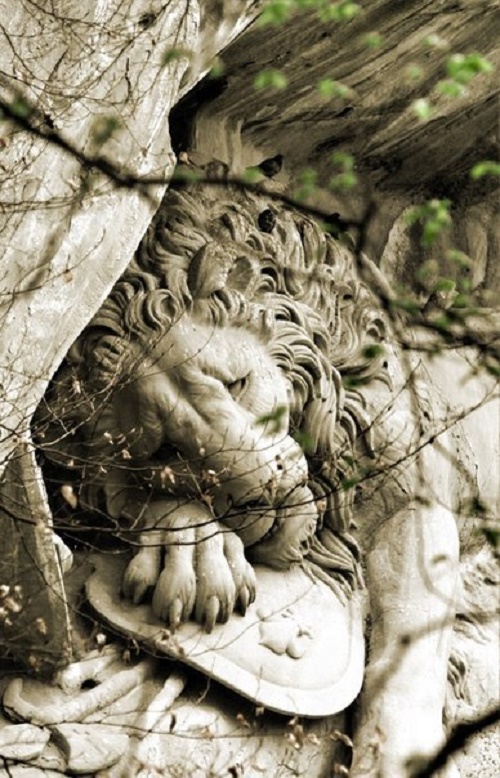 History of the monument started in 1792, and more precisely August 10. That same day, a crowd of commoners gathered near the palace of the Tuileries in Paris, demanded the execution of the royal family. King was defended by his personal Swiss guard, which consisted at the time of thousands of well-trained people.
Initially, the odds were on the side of the king, but the rebels received reinforcements in the form of guns. About six hundred thousand guardsmen were killed in the palace, and another sixty were captured and killed, others died from multiple injuries, or were victims of “September Massacres” – Paris massacre. According to estimates, survived only three hundred guards. 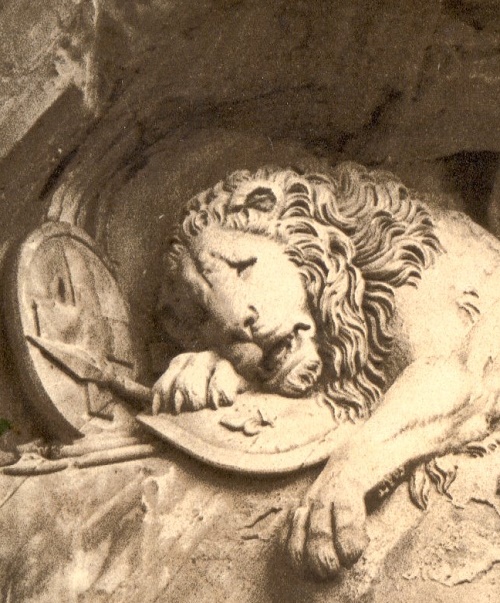 Swiss Guard Lieutenant Karl Pfyffer von Altishofen was fortunate enough – during the events of August 10, he was on leave in his hometown of Lucerne. The officer considered it his duty to pay tribute to the heroes. After military service in 1801, he returned to Lucerne, and eventually became a member of the city council and the head of the Lucerne Art Society. However, in the puppet Helvetic Republic related to Napoleonic France, the Treaty of Alliance, a monument to the Swiss guards who defended Louis XVI was impossible to erect. 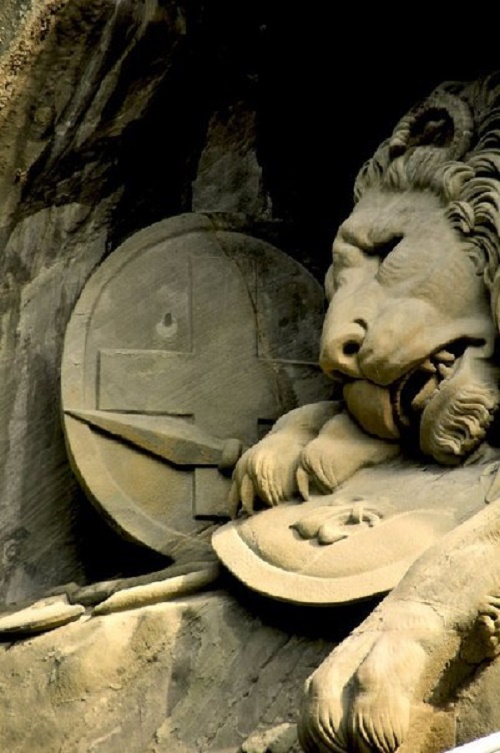 Only in 1814, when Switzerland regained real independence, and in neighboring France the Bourbons returned to the throne of the Patriarchs – a tireless Pfyufer could begin to implement his plans. The idea was to erect a monument in the form of a dead lion, pierced with a spear, and fallen to the ground. He spoke to many Swiss sculptors, but none of the sketches could meet his exacting taste. In 1818, Karl Pfyffer wrote to the famous Thorvaldsen, who was then working in Rome. 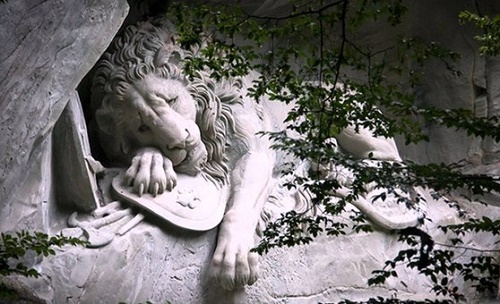 But, the creation of the sculpture based on sketches by Swiss sculptor Thorvaldsen began Lucas Ahorn. The work was completed August 7, 1821. Three days later – on the 29th anniversary of the storming of the Tuileries – the grand opening of the monument, to which the veterans of the tragic events were invited. Thorvaldsen himself saw the monument only twenty years later – in 1841. He was pleased with the high relief and praised the skill of the Swiss sculptor, who had embodied his design in stone. The composition was the first monument in Europe, containing only the image of the animal. Copies of the monument were later installed in Greece and the United States. 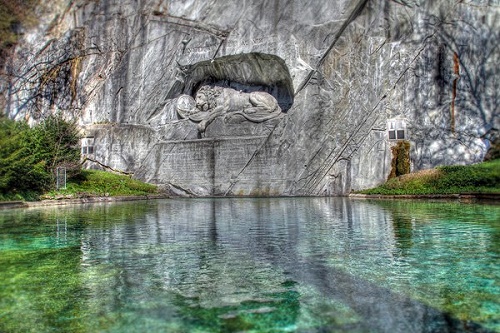 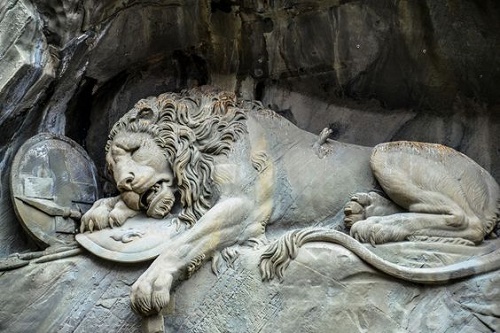 The stone sculpture of a dying Lion 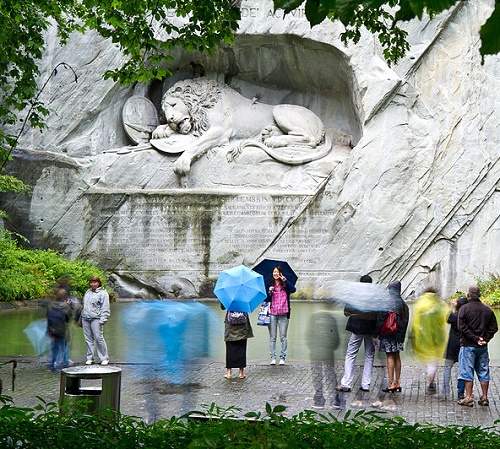 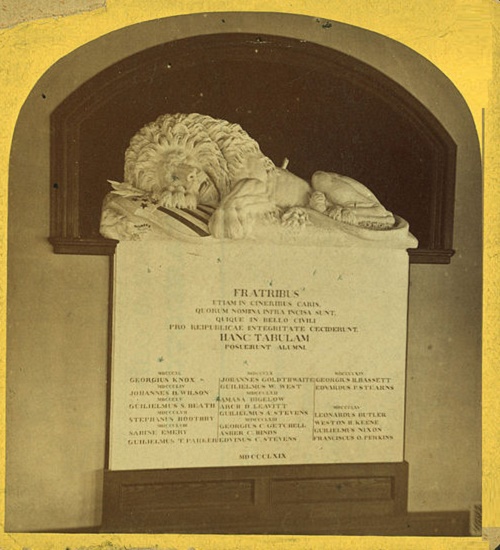 A copy of the statue in Colby College (picture mid. XIX century)