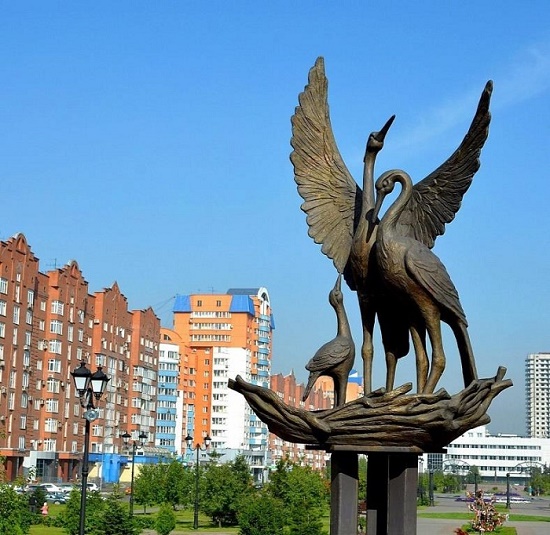 This beautiful sculptural composition “Storks” appeared in one of the parks of the Siberian city of Novokuznetsk. It decorates the area near the brand-new Wedding Palace. In fact, the monument honors the 70th anniversary of the Kemerovo region (October 17, 2012). Located on three stelae the nest symbolizes the foundations of family happiness – faith, hope and love. Meanwhile, since the opening the monument, the sculpture “Storks” has become a real keeper of the family well-being of young couples. The author of the the sculpture (made in bronze and nobly “aged” by the method of oxidation) – Krasnoyarsk sculptor Anton Tyryshkin. 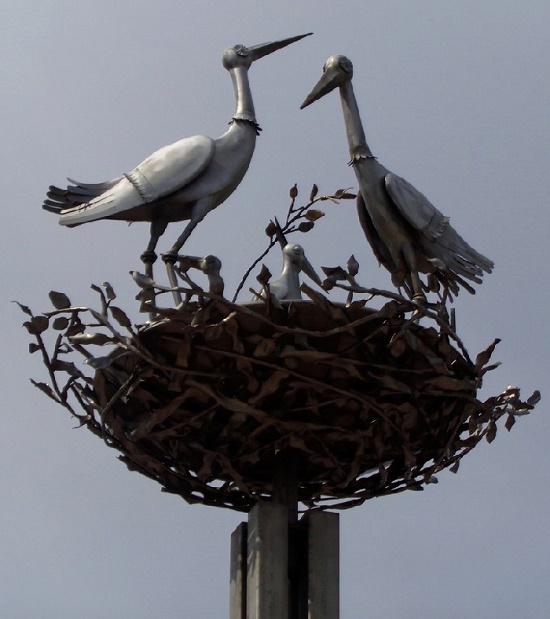 In fact, monuments to storks decorate various cities of Russia – Volgograd, Omsk, Tomsk and Novosibirsk. In addition, in St. Petersburg there is an eight-meter stela, on top of which the storks “settled”, on the eve of Family Day, love and fidelity. Traditionally, people celebrate this holiday on July 8. The nest of storks, guarding newborn chicks, personifies love, loyalty and a happy family. Besides, it is symbolic that this monument is on Vernost (Fidelity) street in the park near the registry office of the Kalininsky district. The authors of the sculpture – the honored art worker of Russia, the winner of the State Prize Viktor Novikov and the laureate of the Lenin Komsomol prize Andrei Polyakov. 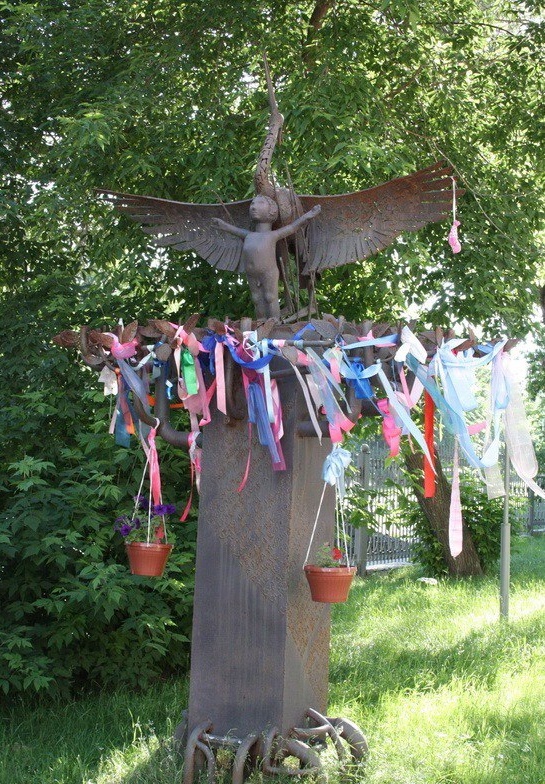 Traditionally, a stork is a symbol of beauty, health and the soonest appearance of an heir in the family. Along with the eagle and ibis, the stork destroys the sinister reptiles and is therefore a sun bird. But, as a creature connected with water and fish, it is associated with the waters of creation. “The baby brought by the stork” in the form of embryos are in the womb of Mother Earth and in the waters of creation, where storks find human creature when fishing. 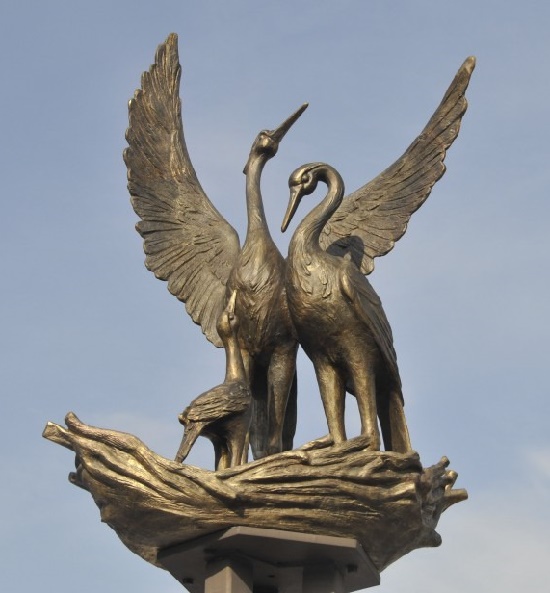 In addition, stork symbolizes the arrival of spring and new life, and is therefore an Annunciation bird.

According to the Chinese, storks mean longevity, happy and peaceful old age, filial piety of worthy, alien temptations, living in the solitude of the hermit. However, for Christians, the stork symbolizes chastity, purity, respectfulness, circumspection and vigilance. As a harbinger of spring it is a symbol of a new life. 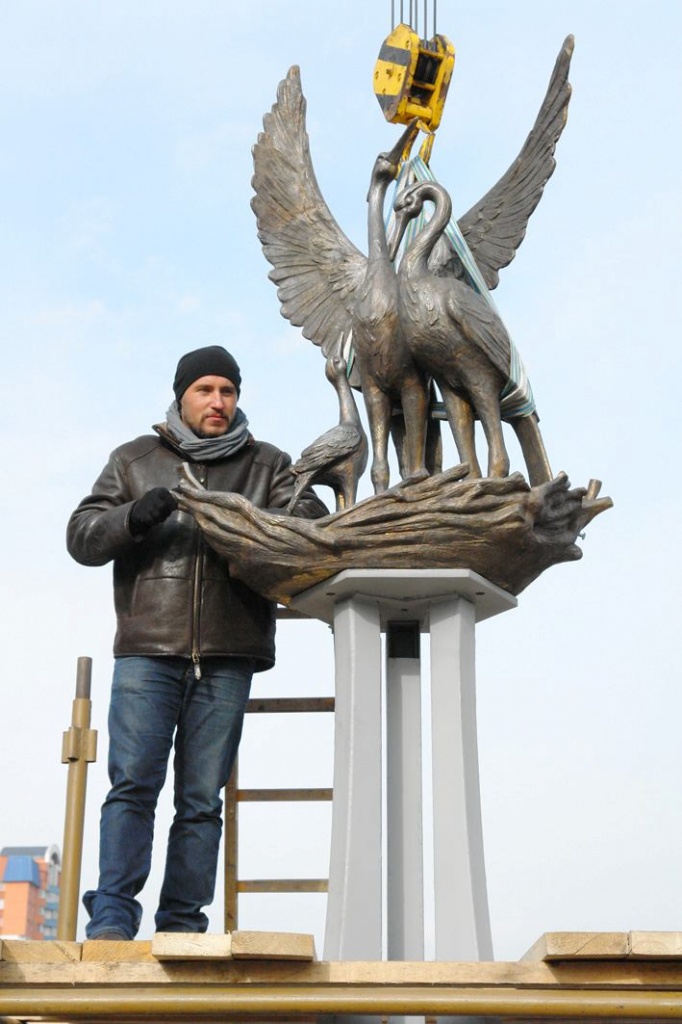 Anton Tyryshkin with his creation, Stork sculpture in Novokuznetsk 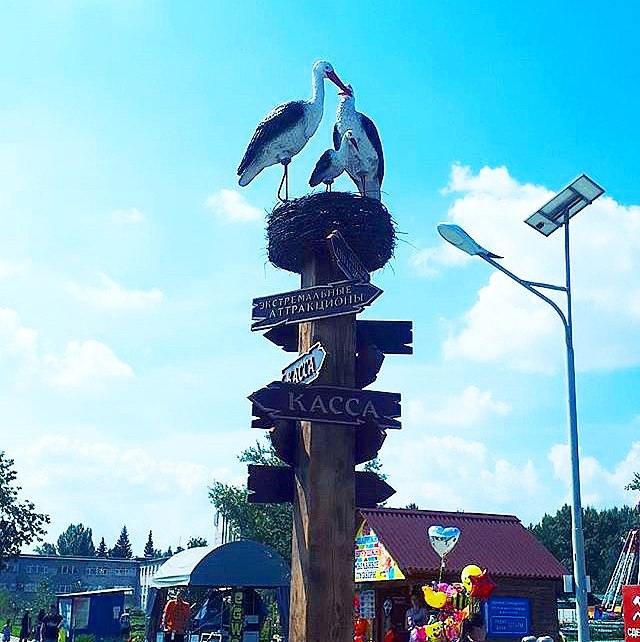 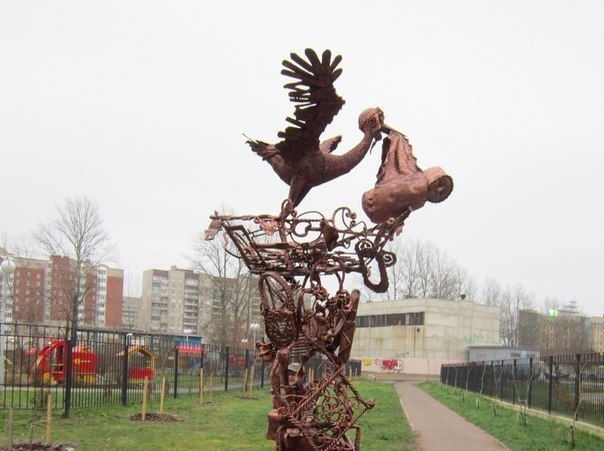 Forged sculpture of a stork, leaving its nest with a baby appeared 20 October 2012. Sculptor Sergey Melnikov 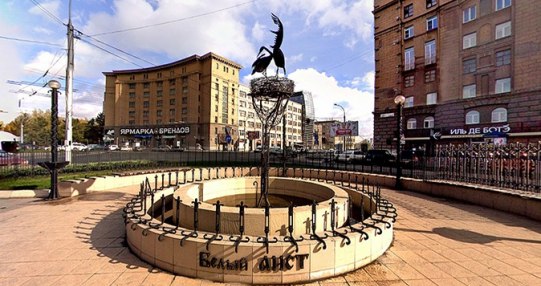 In the center of Novosibirsk, two storks nested, which, as they say, bring not only children, but also real happiness. 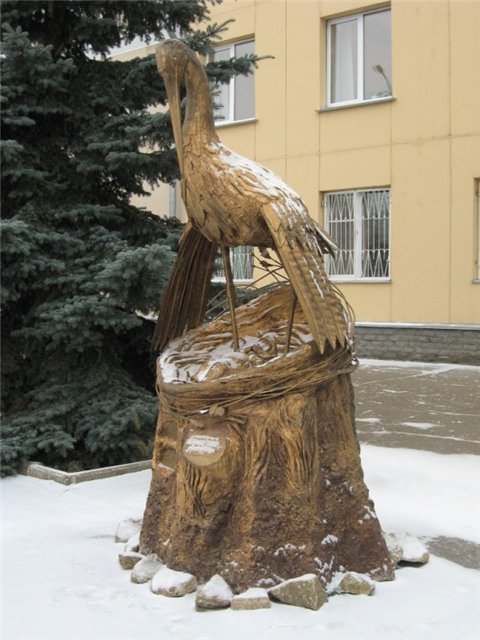 Kirov. If to put something into the nest, then soon in the family be a child 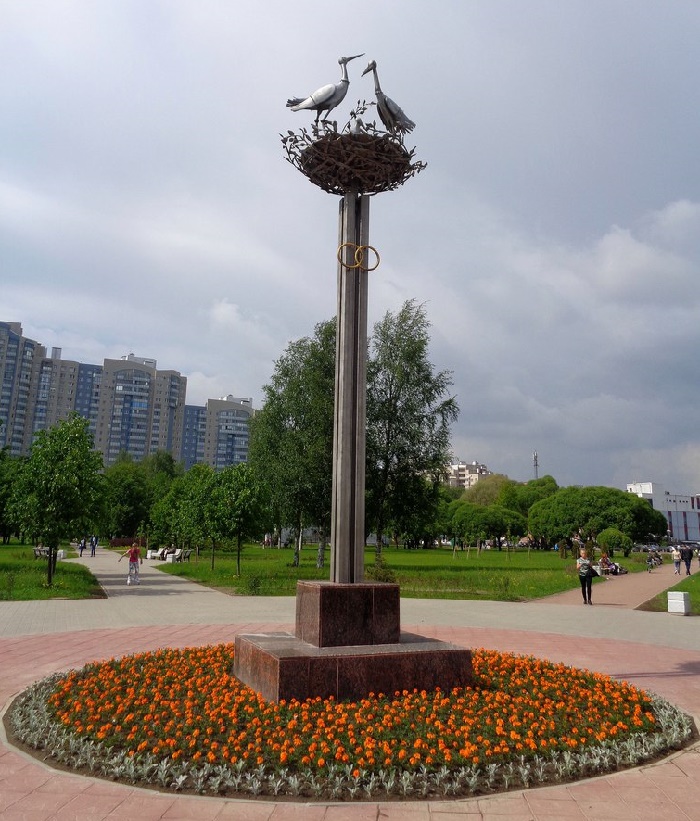 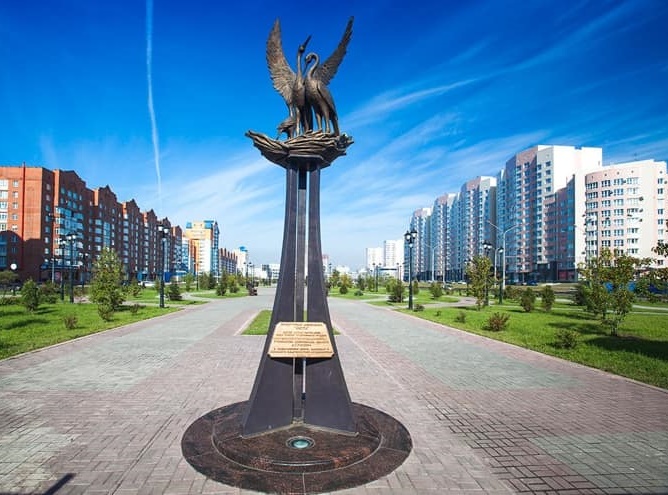 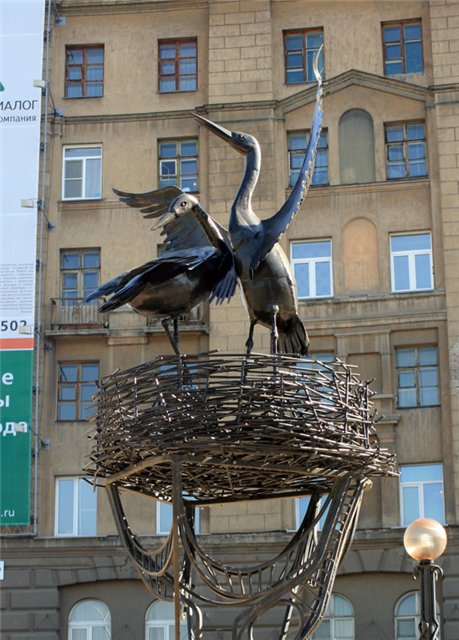 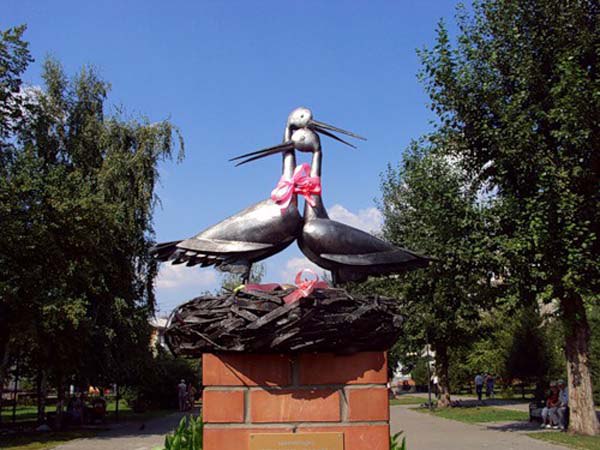 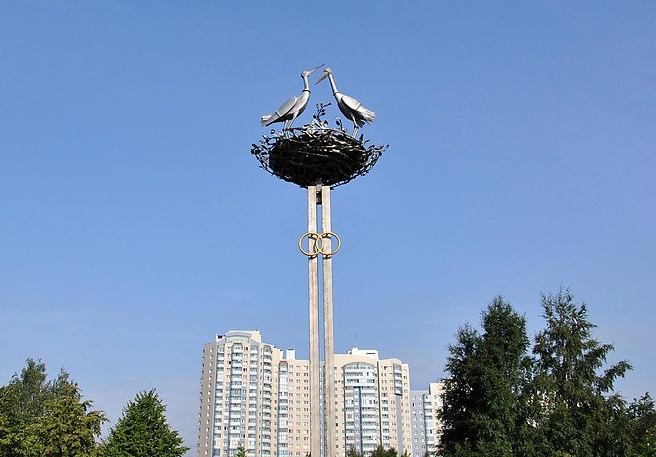 The family of storks in the nest, monument in St. Petersburg 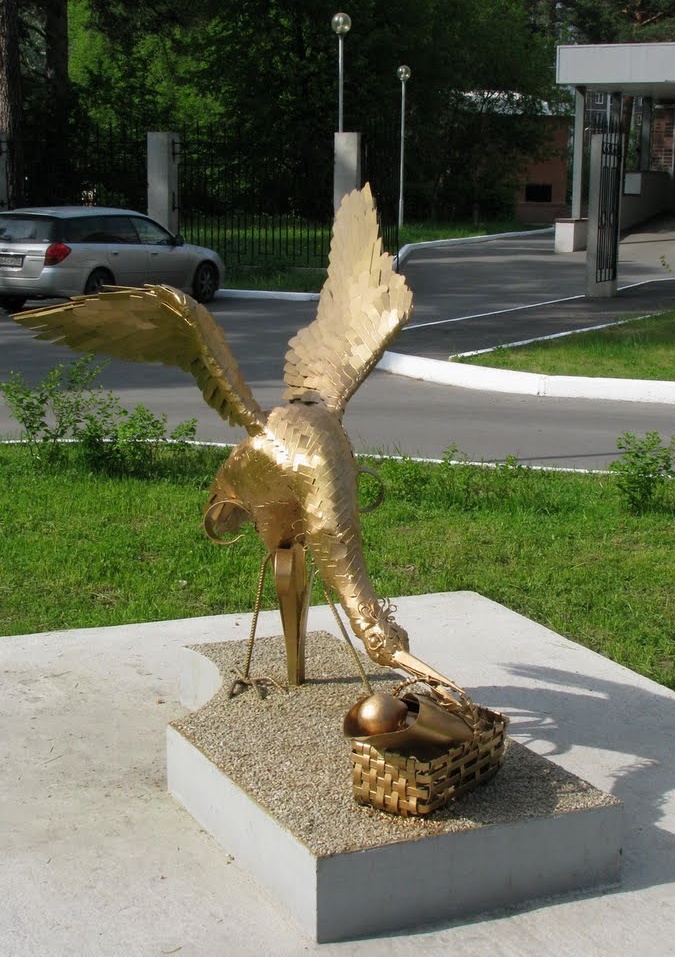 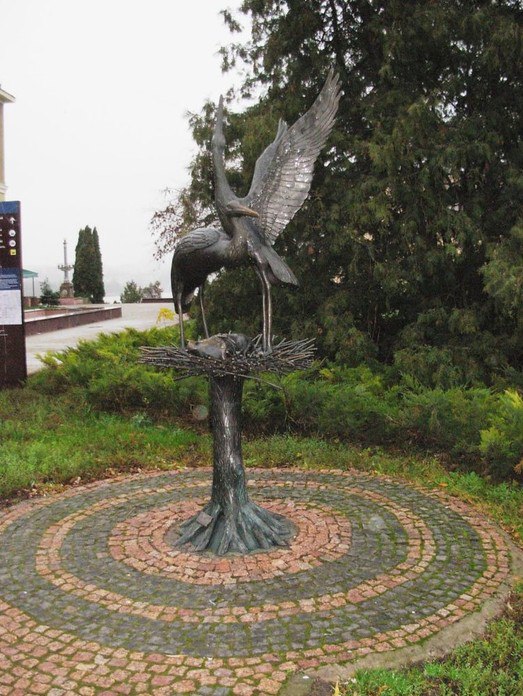 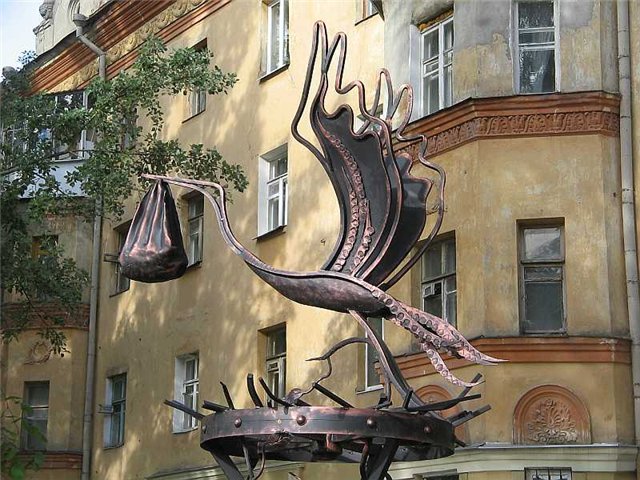 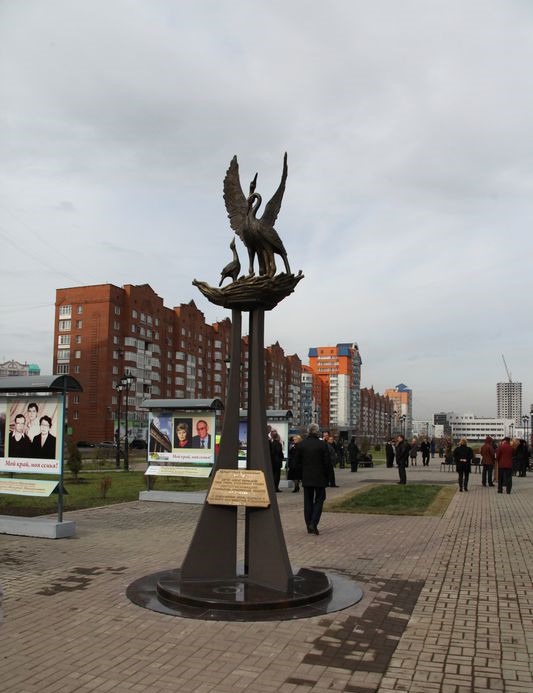 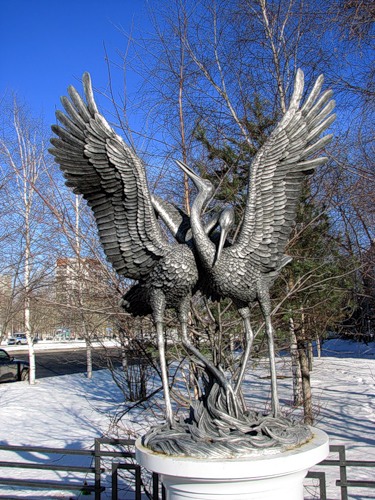