Would you like to meet a Goldfish and make a wish? In the city of Podolsk, Moscow Region, on the picturesque bank of the Pakhra River, there is a Monument to the goldfish. The goldfish is a fairy-tale character who knows how to speak human language and make wishes come true. Goldfish, Copper or Fish are found in the tales of many peoples. 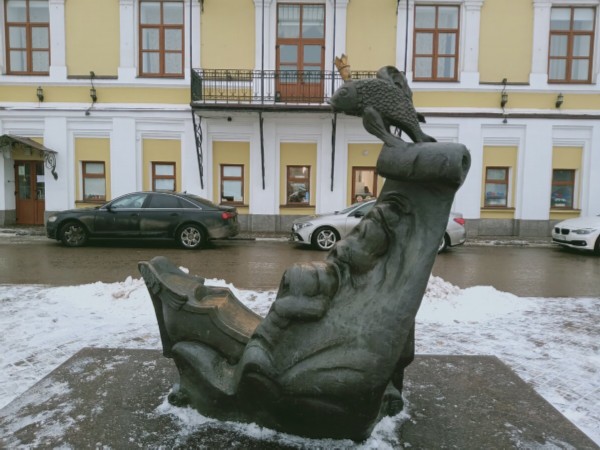 Everyone knows the tale of Alexander Sergeevich Pushkin “The Tale of the Fisherman and the Fish”.

But for the first time, the literary tale of the fish was reworked by the brothers Grimm. This tale is called “The Fisherman and His Wife”, and the fish there is the flounder. The fish is the most powerful symbol that brings prosperity, good luck or well-being to the home. The goldfish is the personification of fate, which can be supportive of a person, and can punish for ingratitude and arrogance, “leaving him at a broken trough.”

The fish gives you the opportunity to start a new life and is a symbol of enlightenment. The installation of monuments to the heroes of poetry and prose has already become a tradition that goes back more than one decade. In many cities of Russia and other countries, such sculptures are located on streets, squares, embankments, squares and parks. There are a lot of monuments to the Goldfish in Russia. They are in Astrakhan, Abakan, Gelendzhik, Kaluga, Kemerovo, Moscow, St. Petersburg, etc.

In the fall of 2013, a monument to the Golden Fish was unveiled in the city of Podolsk. This work was carried out by the Soviet and Russian sculptor Andrei Yuryevich Orlov. A.Yu. Orlov was born in 1946 in Moscow. In one interview, Andrei Yuryevich said that he was born, he was probably in his mouth with plasticine, from childhood he loved to draw and sculpt.

His famous works in Moscow are the monument to the heroes of the works of Arthur Conan Doyle detective Sherlock Homs and Dr. John Watson, folklore character of the East Hodja Nasreddin, as well as the famous hero of the adventures of the German writer Rudolf Erich Raspe Baron Munchausen.

Let’s go back to Podolsk. The sculpture is made of bronze and depicts a Goldfish on top of a wave. On one side of the monument there is a seat where you can sit down, make a wish and take a picture. The sculptural composition harmoniously blended into the landscape of the Khudozhestvennaya Embankment (Fedorova St.) and became its “highlight”. So the Traveler Hare could not resist and asked for a photo as a souvenir.