« Knitting grandmother monument
What The Girl with an Oar reveals » 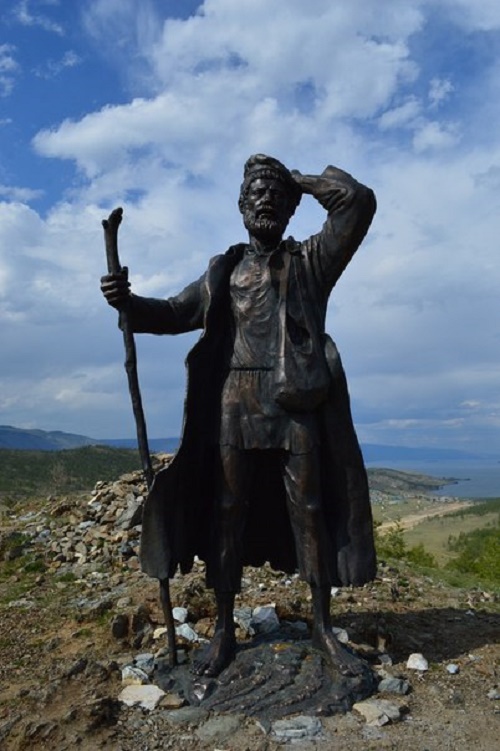 Baikal Wanderer Monument was installed in October 2014. The place for the monument was chosen the viewing platform on the mountain in the Lake Baikal area, next to the village, which locals call the “MPC”. The monument is made of bronze, its height is four meters. Next to the statue is a marble slab, on which is carved the lyrics of the song “On wild steppes of Transbaikalia”. The song was composed by the convicts in Siberia. At the beginning of the 20th century it was published and recorded. It has since become part of the repertoire of various Russian and foreign artists. The author of the sculpture “Baikal Wanderer” – Buryat sculptor Tsydenzhal Tsyzhipov. Baikal Wanderer is a collective image of the escaped convict, which the artist managed to convey the most truthful. Bronze tramp as if came out of the legendary song, which has the following lines:
He wears only a thin shirt,
And set of different patches.
The cap on his head is a convict’s cap
And he wears a grey convict’s uniform. 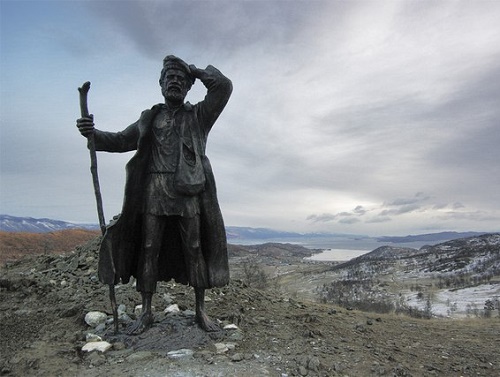 Moreover, to underline the poverty of the fugitive, the artist has decided not to shoe him, so the vagrant is standing on the shore of Lake Baikal barefoot. According to the media, it was made on the initiative of Sergey Kopylov – Mayor of Olkhonsky area. The monument is wonderful, and the place is chosen well, memorable for tourists – a small sea (the Baikal) in all its glory! 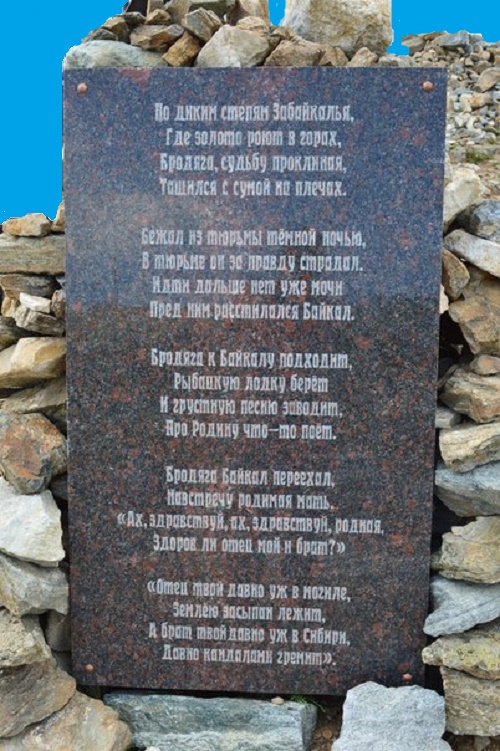 The text of the Russian folk song “By the wild steppes of the Transbaikalye” embossed on the plate, opens a deep emotional “glow” of the narrative:

On the wild steppes of Transbaikalia,
Where people dig for gold in the mountains,
A vagrant, bemoaning his fate,
Is wandering with a bag on his back….

He walks through the thick taiga,
Where only a few birds sing,
He carries a tin can on his side,
His feet are strapped in dry skins.

He wears only a thin shirt,
And set of different patches.
The cap on his head is a convict’s cap
And he wears a grey convict’s uniform.
He escaped from prison during a dark night
Where he was imprisoned for defending the truth.
But he could not go any further
In front of him was Lake Baikal.

The vagrant walks to the shore
And climbs in to a fisherman’s boat.
He starts to sing a sad song
Telling something about his native land.

“I left my wife when she was young
And left her with my small children,
Now I wander aimlessly,
God knows, whether I shall meet her again!”

He crosses the lake,
His mother comes to meet him.
”O my dear mother let me embrace you,
Are my father and my brother well?”

“Your father has been dead for a long time;
He now rests in the damp earth.
And your brother is serving his sentence,
Wearing chains, somewhere in Siberia.”

“Let’s go, let’s go, my son,
Let’s go home to our house,
Where your wife misses her husband,
And all your little children are crying.” 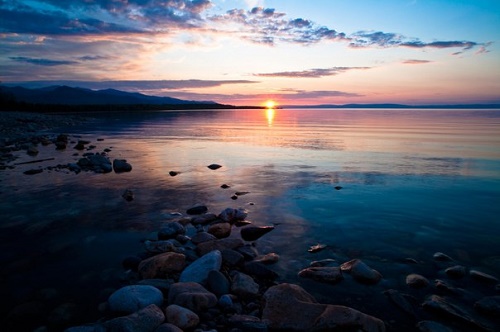