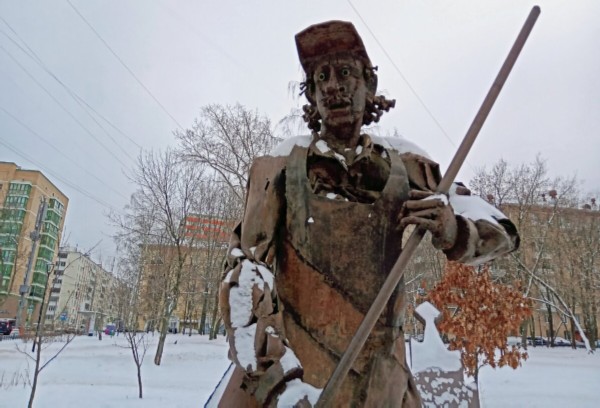 One of the most popular characters in modern urban sculpture is the Rostokinsky janitor.

In Russia until 1917, the word “janitor” meant a person who maintained or owned an inn. Currently, in the explanatory dictionaries of the Russian language, a janitor is one who maintains cleanliness, order in the yard and on the street near the house.

Urban sculptures of janitors have been installed in many cities around the world to show that the people who keep the city clean are worthy of respect. For example, there is a sculpture of a janitor in Madrid on Jacinto Benavente Square, in Tbilisi “Janitor on Shavteli”.

Urban sculptures depicting janitors have also been installed in Russian cities to remind them of their hard work and to thank them for making our cities clean, well-groomed and beautiful every day.

In 2006, in the north-east of Moscow, in the Rostokino area, a sculptural composition “Rostokinsky janitor” was installed. It is located at the intersection of st. Malakhitova and st. Bazhova, on the hill of the Rostokinsky aqueduct. The idea to thank the people of this profession in this way belongs to P.M. Povolotsky, head of the Rostokino District Council.

The sculptures Vladimir Lepeshov and Andrey Aseryants were entrusted to realize the idea.

The sculpture is made of scrap metal, the height is 3 meters. The janitor has a broom in his hand, an apron is put on over his clothes, and a baseball cap is on his head, from which naughty curls are knocked out. The windshield wiper’s curls and mustache are made of bolts and nuts. The sculptors did not clean the rust on the iron, but even impregnated it with a special solution.

The sculpture of the janitor is a collective image, but there is still a prototype On the street. Wilhelma Pieck has been working as a janitor Victor Kollegin for more than 20 years, sculptors’ workshops were located nearby. Viktor Kollegin (Uncle Vitya, as the locals call him) is responsible, kind, always ready to help, does his job efficiently and with love. Victor told the sculptures how to hold the broom correctly in order to more realistically show this in sculpture. And he also asked that the hands were not rough, and the fingers were long and beautiful like a musician. 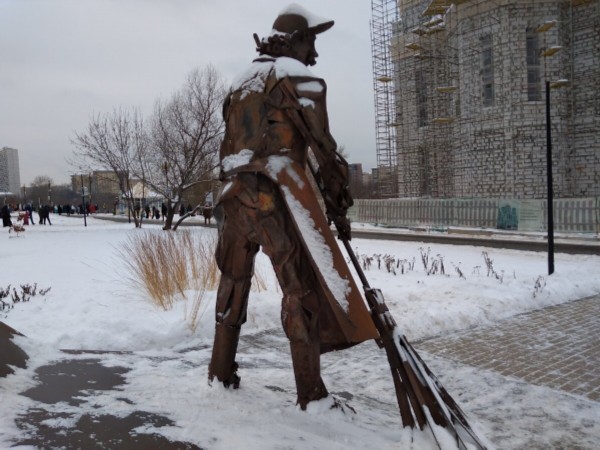 The sculpture of the Rostokinsky janitor is installed on a pedestal.

An iron sheet that serves as a pedestal ends with a Kremlin wall. As conceived by the authors, the Kremlin Wall emphasizes that this sculpture is from Moscow, an ordinary janitor is significant for the city, and someone is also sweeping Red Square. In the comedy “Yolki”, it was the janitor who cleans snow from the Kremlin wall who wrote an appeal to the president with the words Varya needed for the girl.

Andrey Aseryants is distinguished by irony, Vladimir Lepeshov – by seriousness, Rostokinsky janitor is a combination of humor and solidity, the roughness of the material and the lightness of the idea.