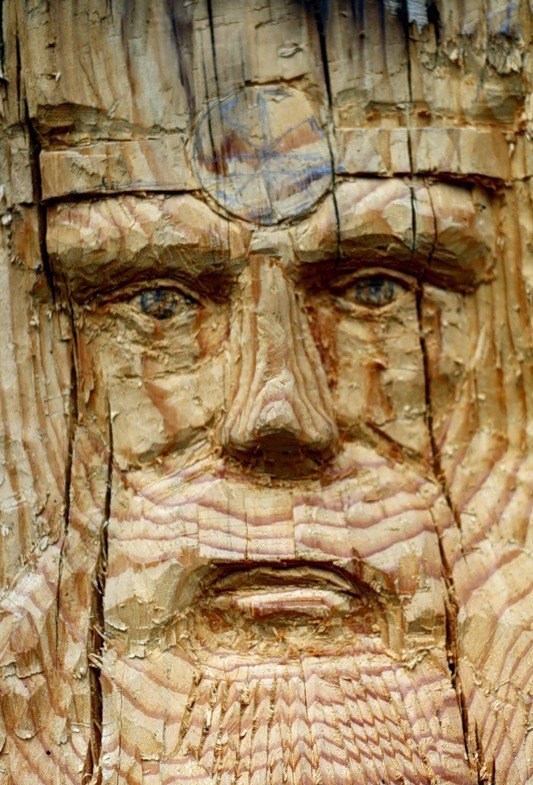 In the depths of the forest, behind the sanatorium “Prilesye”, that is in Togliatti there is a pagan temple. It is here the amazing sculptures of Slavic idols decorate the forest. Their author – Evgeny, a 70-year-old woodcarver. According to the reviews of those who met and talked with him, Evgeny is friendly and quite cheerful. He works at the behest of the soul, as the Master should. He is constantly in the open air, and lives in a tent in this forest. Unfortunately, vandals spoil and even burn his sculptures from time to time. “They destroy and burn, and I’m building again,” he said with a smile.
The scale of his work, of course, is impressive. This is a titanic, uninterrupted work. Many dozens of pine trunks processed over the years can impress anyone. In search of deadly trees Evgeny passes many kilometers away from his tent. To deliver the trunk to the right place, he sometimes has to spend up to 4-6 hours a day. Chisel, ax, chainsaw – these are the main tools for the master. Meanwhile, in addition to carving wood, he also engages in healing. People who wish to get rid of infertility, from male impotence, and from other ailments visit him. 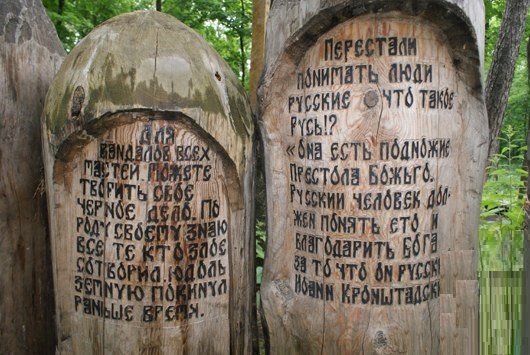 Russia is the foot of the throne of God. In heaven – God, on Earth – Russia. Slavic deities wooden sculpture in Togliatti

In addition, different people come here. Some sit, do not interfere with anyone, think about something, meditate or communicate with each other. However, this place attracts all sorts of freaks: from contactees with extraterrestrial civilizations to sexual maniacs.

Meanwhile, Evgeny also earns for living by selling pictures depicting his wooden sculptures. Noteworthy, on some of them some people can discern prominences and inexplicable radiance. Also, Evgeny dreams that he had the opportunity to install sculptures in the territory of a Sanatorium. The forest is in federal ownership, therefore Evgeny’s activity in this territory seems to be not entirely legal. But, since he does not harm anyone, the local authorities look at his work indulgently.

Talking about the sculptures of the Egyptian gods located in the territory of his temple, he says that these are Venusians who came to Earth from Venus. And he really wants to involve children in the study of spiritual practices: supposedly the children have the greatest perception of the aura.

It is interesting that many carved pillars bear numerous carved inscriptions. So, the fonts themselves printed on the trunks – this is a headset, stylized as a Church Slavonic Cyrillic alphabet. The content of the texts is the fruit of the author’s fantasy or eclectic neo-pagan statements.

The origin of neopaganism (relatives, etc.) in modern Russia has a rather amusing story. In the XIX century, Russian occultists and mystics the invented the theory of the origin of Aryans – Blavatsky, Gurzhdiev, and Nikolai Roerich. In fact, at the beginning of the twentieth century fascism, born in Germany, took for the mystical background of its ideology the theoretical studies of the Russian Occultists. 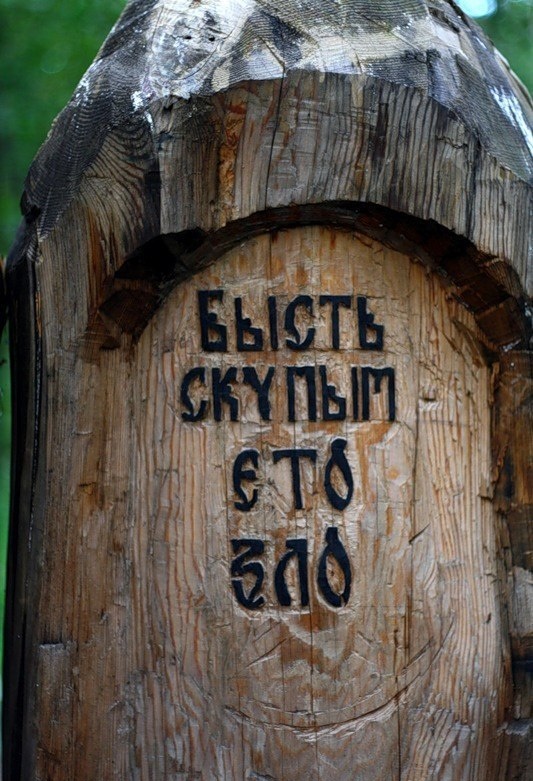 Being greedy is evil

With the defeat of Nazi Germany and its satellites the theme subsided, but after several years, transformed, appeared in a new form. In 1952, among the Russian emigres of the second wave, from where did the materials originate with copies of the supposedly pre-Christian Slavonic script. “The Book of Veles” and other pseudo-linguistic works have precisely this origin. Disputes about the authenticity and origin of these documents have reached our days, supplemented by numerous revelations of the modern “Magi”.

Adherents of pagan views argue that the secret knowledge that has come down to us already from pre-Christian times has been preserved by the Magi and reached us through the millennium. So, whether in writing or preserved in the noosphere, modern magicians from outer space dictated this knowledge.

In fact, some have made these carved sculptures the object of worship. Anyway, the works of Evgeny are, first of all, the work of art. 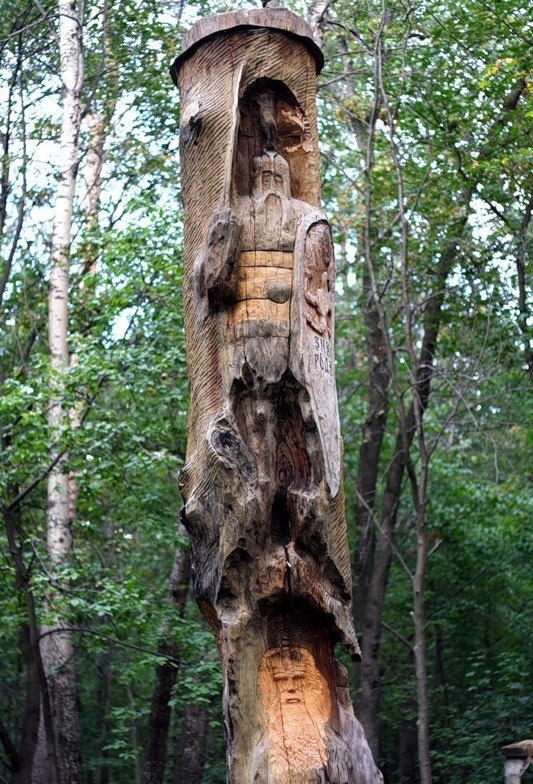 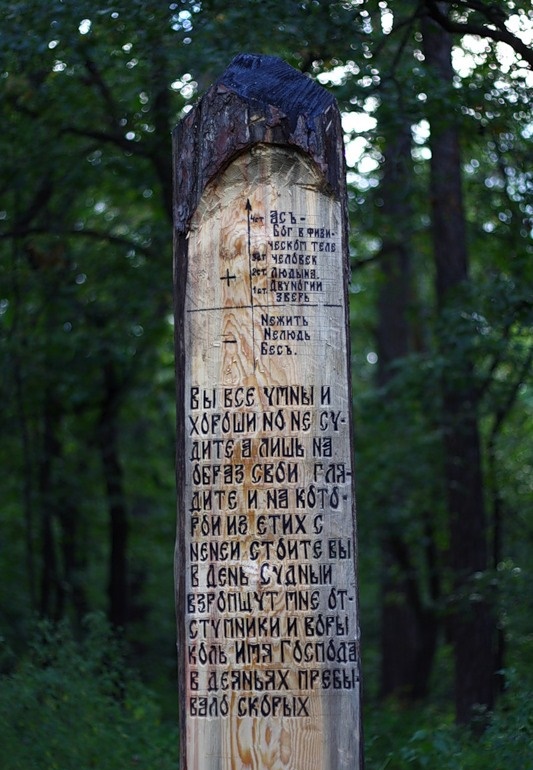 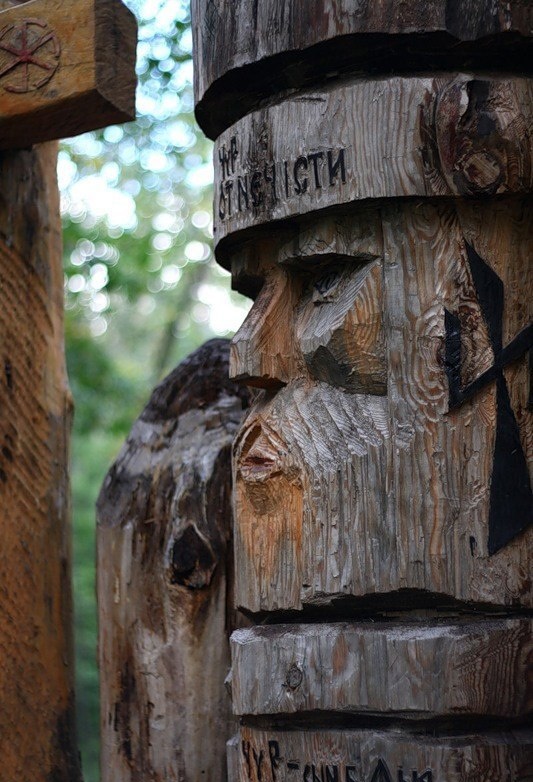 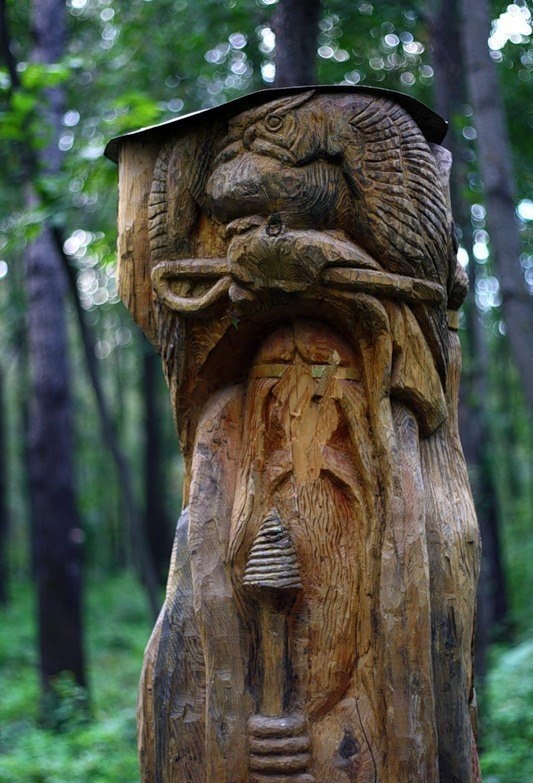 Mysterious sculpture in the Russian forest 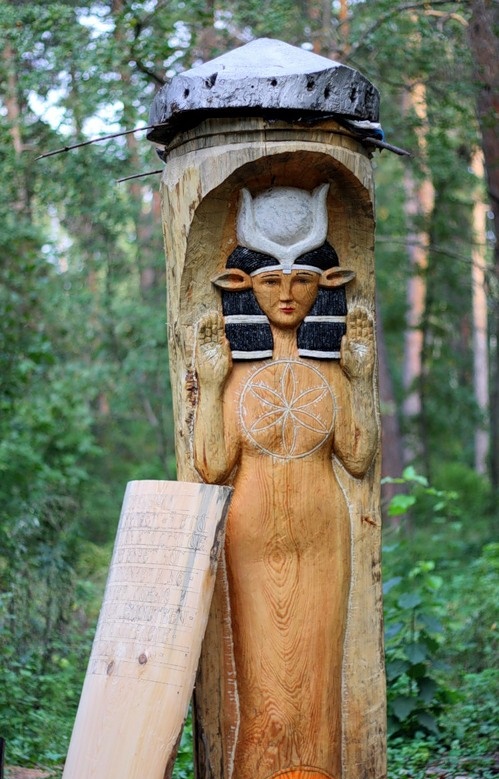 One of the sculptures of Slavic deities 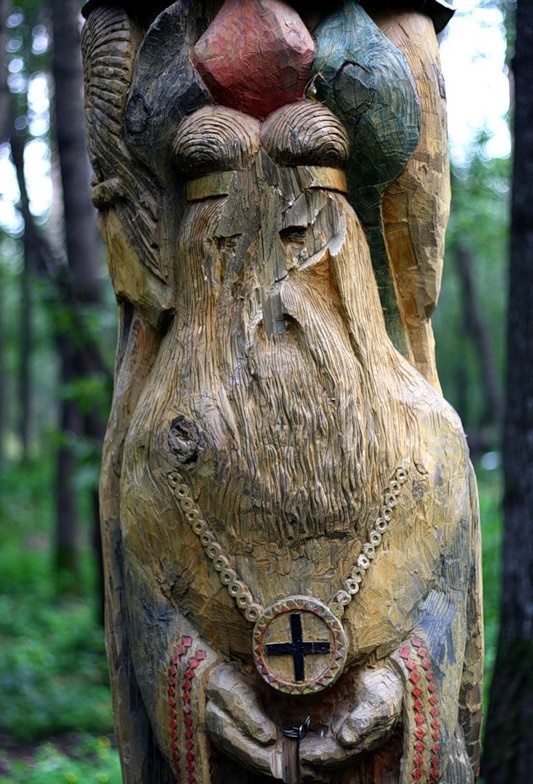 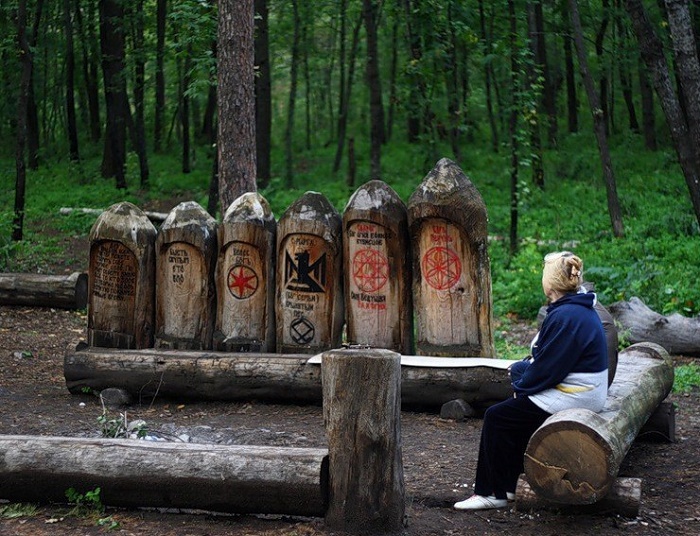 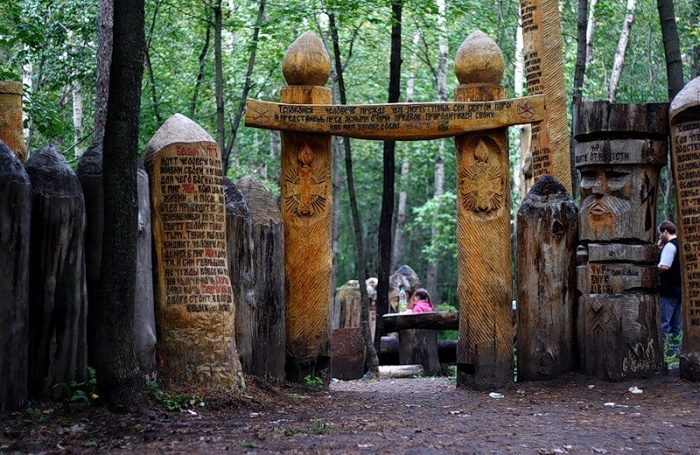 The gates to the Slavic Gods temple 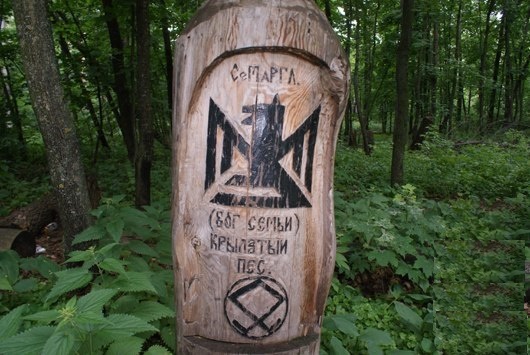 The God of the family is the winged dog 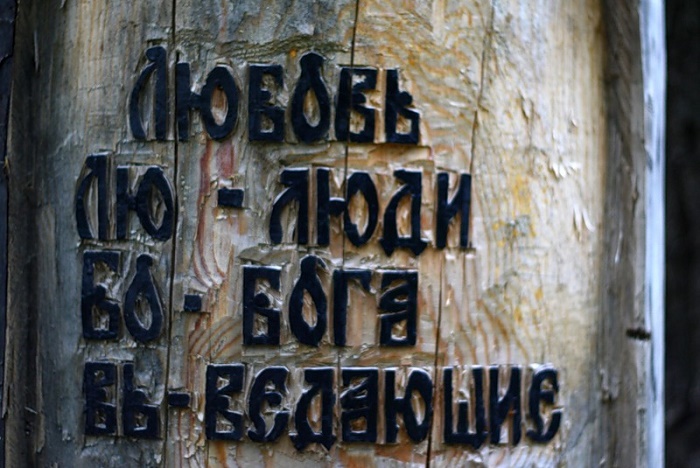 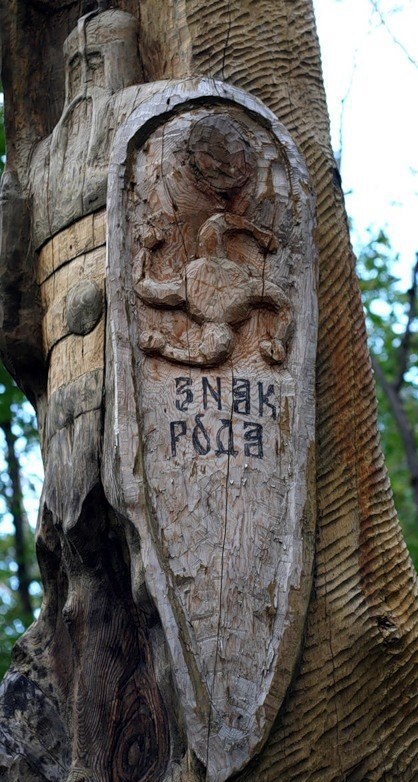 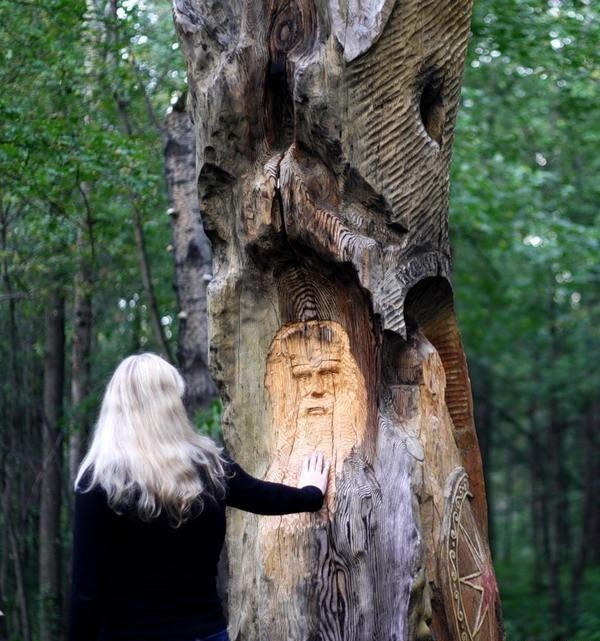 To touch the deity – to be charged with cosmic energy 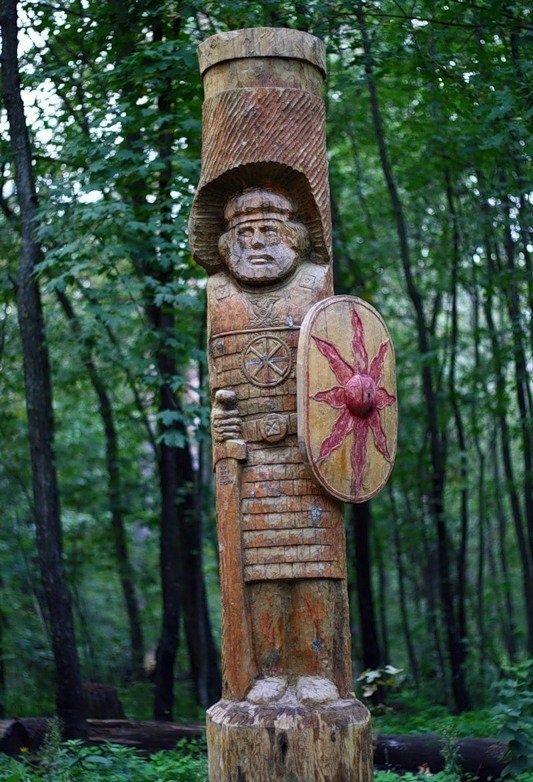 Warrior of the Sun 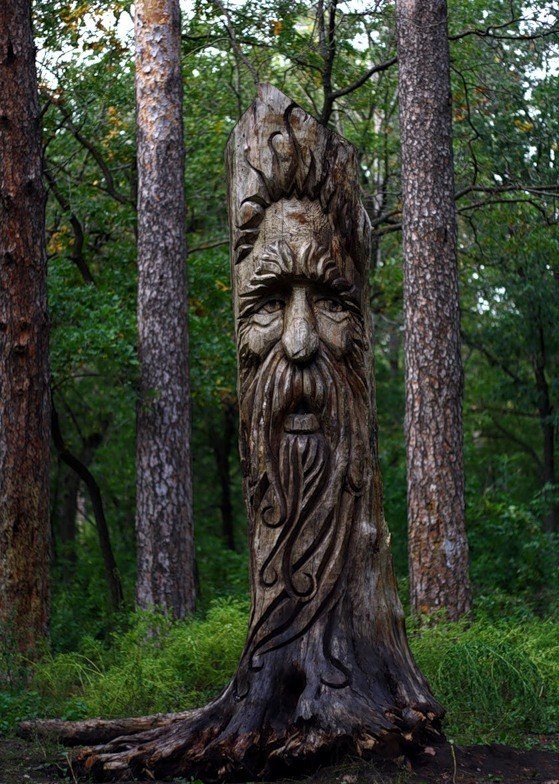 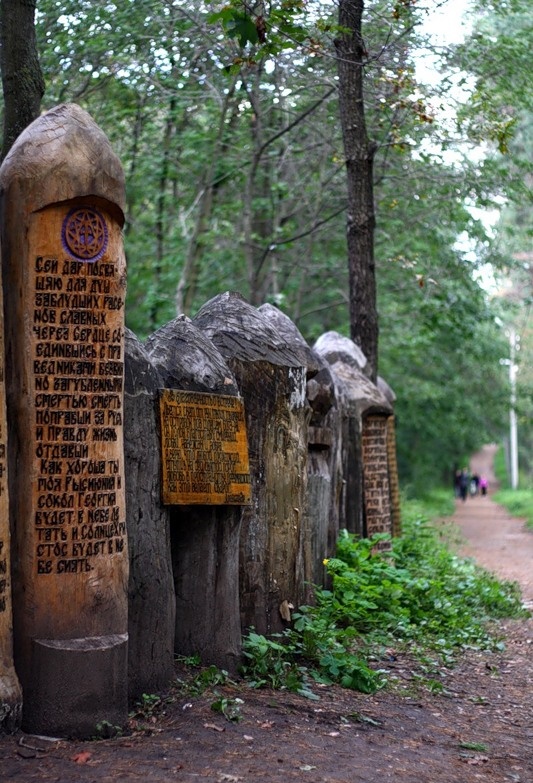