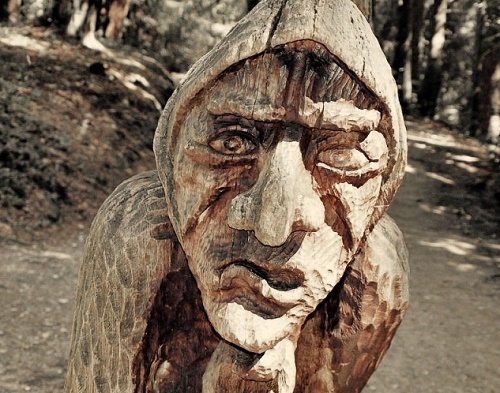 They say that since the immemorial time hell witches organized here their peers. Even the most important witch Rage, happened to appear at the annual Sabbath in honor of the shortest night. Witches can not only frighten or intimidate, but also send drought, rain or hail, eclipse the sun, and turn a man to stone … This place is special, just the brink of a mystical and real worlds where fantasy comes, awakening creative forces. Jonas Stanyus, Juodkrante forest ranger – once feeling this atmosphere, thought: why not to depict characters of fairy tales and legends that existed centuries in folklore. So, in 1979, the Lithuanian folk artists – carvers and blacksmiths – the first time gathered on the hill. They created a gallery of 25 folk sculptures. The following year – another gathering, and a year later – the third. Until now, almost every year the hill attracts the masters, who restore the old sculptures, and create new ones. And to this day, it is a solid legacy – more than 80 sculptures from oak with metal detail – a gift of folk artists to the town of Juodkrante, Lithuania and to everyone who has ever been on the Hill of Witches. 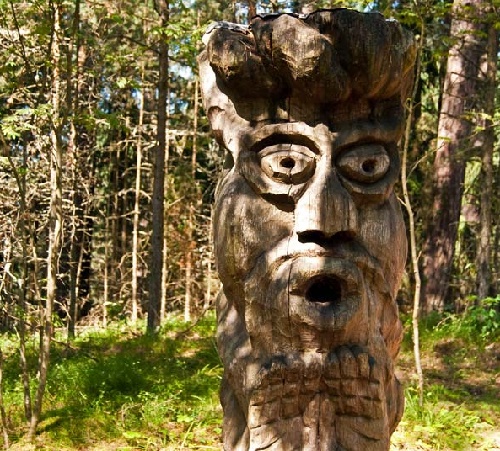 The hill is a sacred place among the tribes of Cours and Samba. Idols – Curonian deities, lifestyle and religion which inspired Tolkien to create a Sindar tribe (Twilight elves). After the arrival of the Crusaders in 1255 worship of these gods was forbidden. Nevertheless, this place remained sacred to people practicing the old Vedic cults. To the hill, every year came witches from all over Europe, and almost fearlessly committed worship of the forces of nature and the mother goddess. Besides, the hill was on a small island, access to which was rather impeded, and no one could keep an eye on “the protection of the rule of law” on the island. 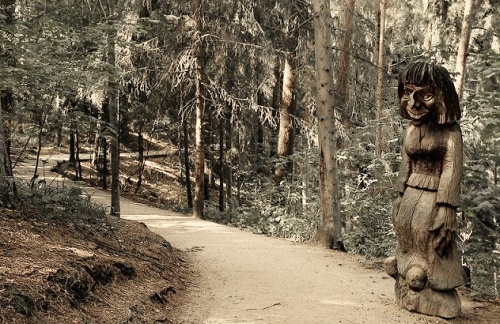 Nature, as if divided hill into two parts: the light and dark. At first the trail is wide, sunny. And good fairy-tale characters inhabit it: giantess Neringa, 12 brothers – black ravens, and their sister Elenute, fisherman Custis and his faithful wife, awaiting for her husband the fisherman. At the top of the hill – the characters of tales of Naglis and Neringa. Well, then, the “Frog Rain” trail narrows and the sky seems to darken. And here begins the “hell”: the unwary passerby can meet a snake – dragon, and the further – the worse. The gates of hell through steps of which appears from the abyss of nothingness Lucifer. The path becomes more narrow and winding, and at the bottom – a steep cliff that looks scary … 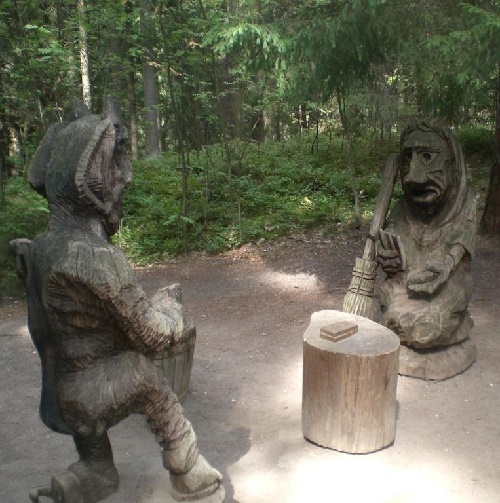 The devil and a witch play cards

But the cock crowed, and the ghosts fled, as if nothing had happened. The path widened again, the sky brightened. You look, and before you – a fun feast. Cheerful musicians, dancing couples, even further – games, swing, fun for children. At the foot of the hill – a hut with a boat instead of a roof and out of the window spies on the sly passers Witch: Come, she says, and will be a guest. All the sculptures designed by S. Sharapova and architect A. Nasvitis. 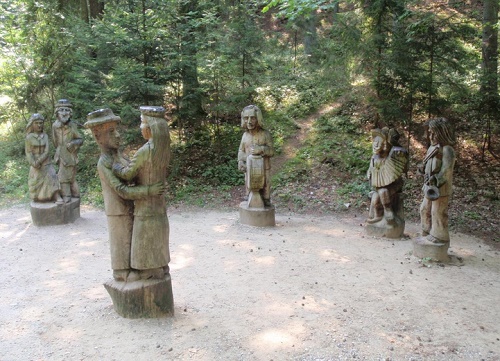 In the XIX – early XX centuries, inhabitants of Minor Lithuania loved to celebrate Rasos or St. John (Ivan Kupala night). On sailing boats and small steamers, choristers and musicians of Tilsit, Rusne, and Klaipeda passed the Curonian Lagoon and came to the hill to have fun and collect flowers. The First World War put an end to this tradition. 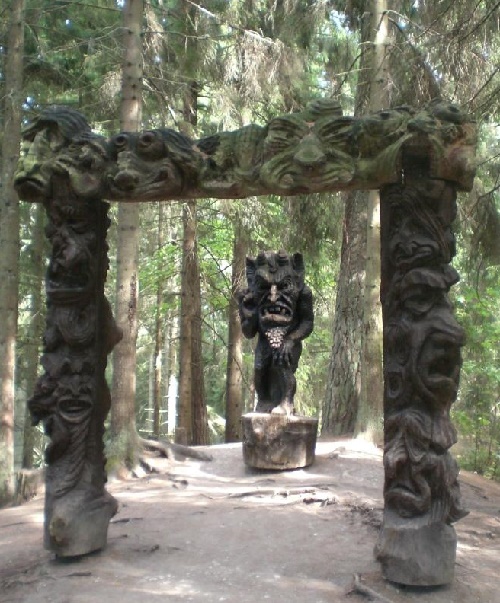 After 1933, the attitude of the authorities to the hill dramatically changed. The Nazis, who came to power, tried to revive the old Germanic and Aryan cults. And of course, by them did not pass one of numerous Curonian legend, according to which at this point crashed a ball of fire, out of whom came the tall people, and taught the wild locals what the knew, giving them a civilization. The Nazis interpreted this legend as the coming to earth the ancient Aryans, and began to revive ancient rituals. No wonder, the rituals had clearly ideological coloration. After World War II, half of the Curonian Spit, along with the hill, went to Lithuania and the other half – to Russia. About sacred place forgot for several decades. 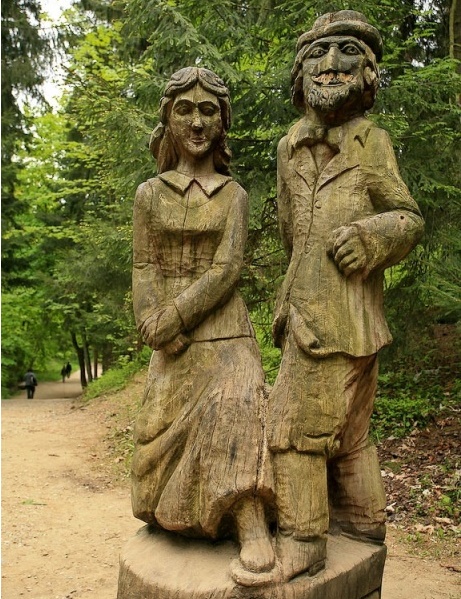 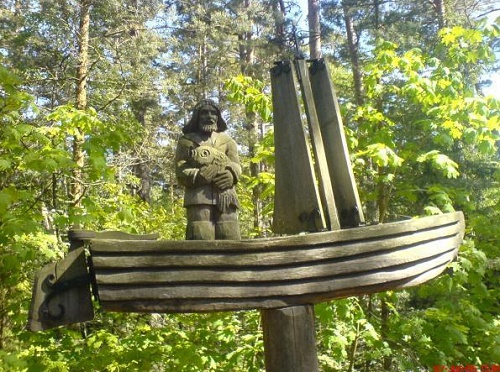 A fisherman in a boat 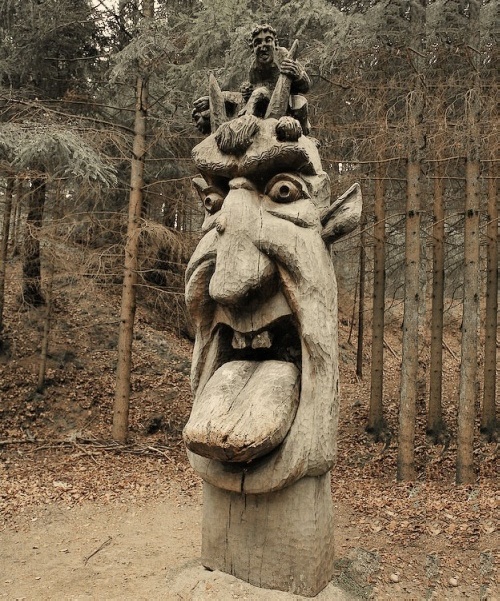 A sacred place Hill of Witches in Lithuania 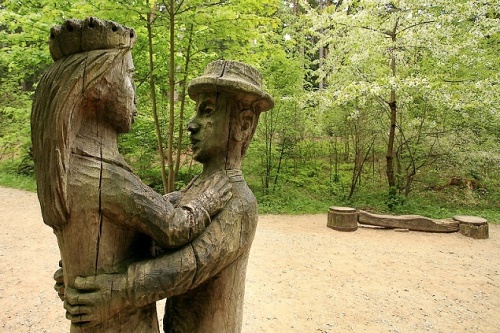 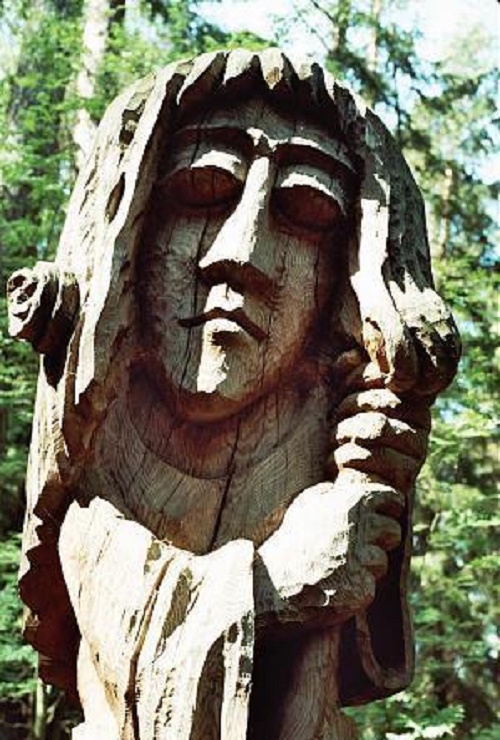 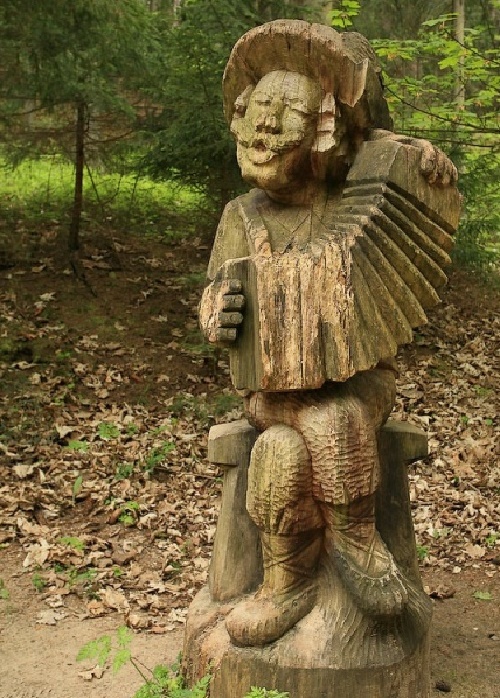 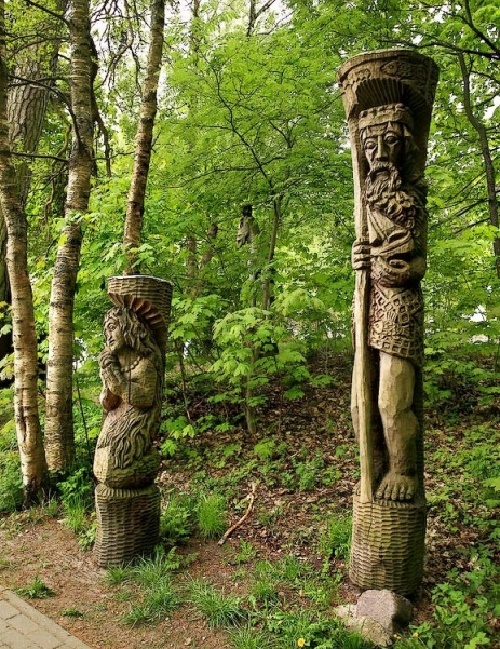 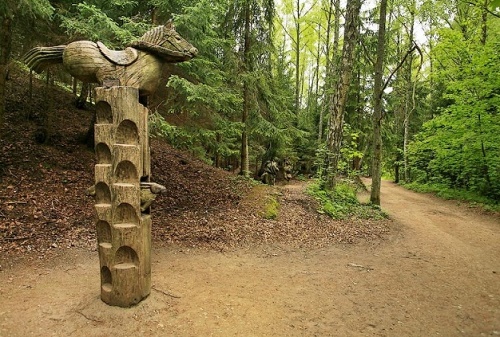 One of 80 wooden sculptures on the hill 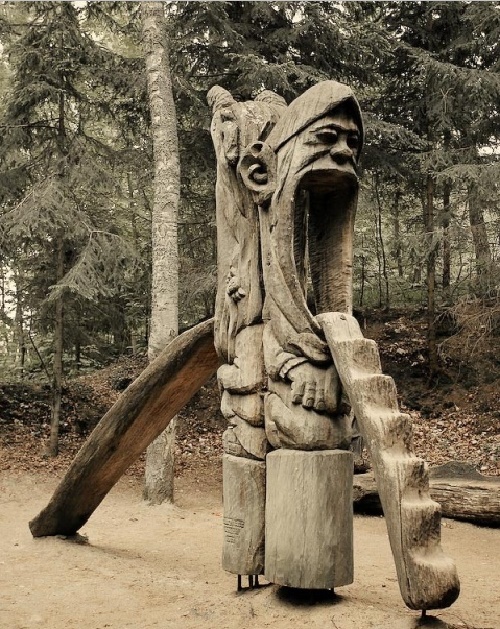 Pagan tradition is a good attraction for children to have fun 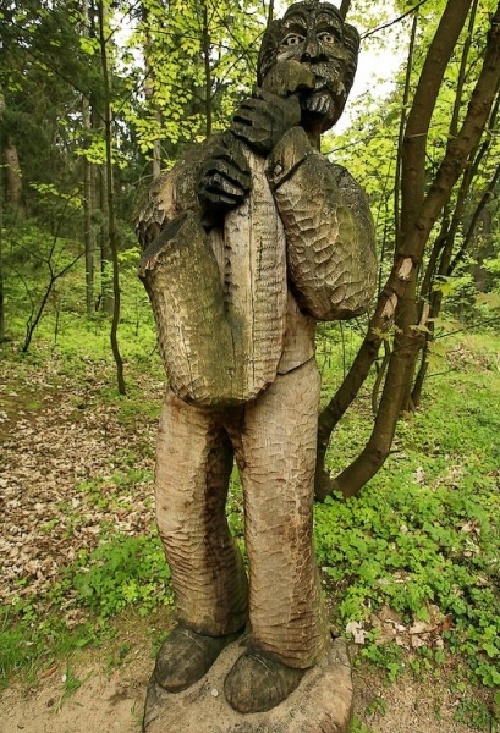 Scary and funny, at the same time sculpture of a musician 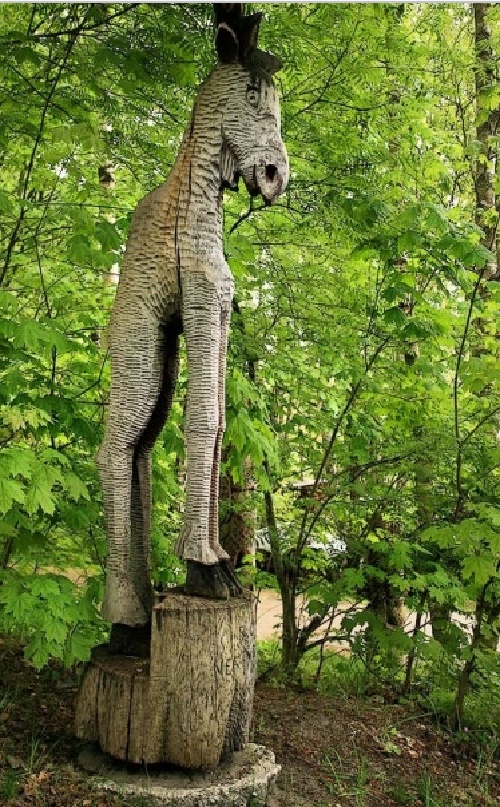 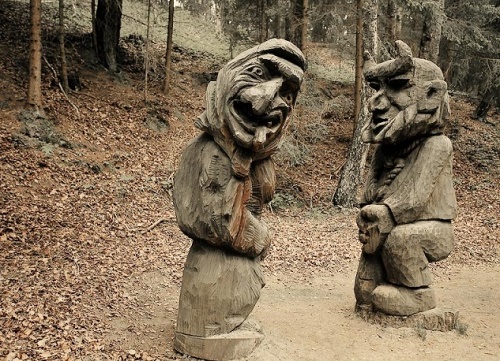 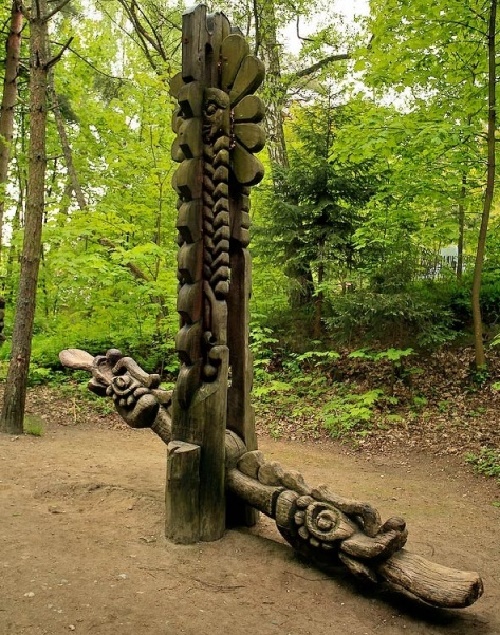 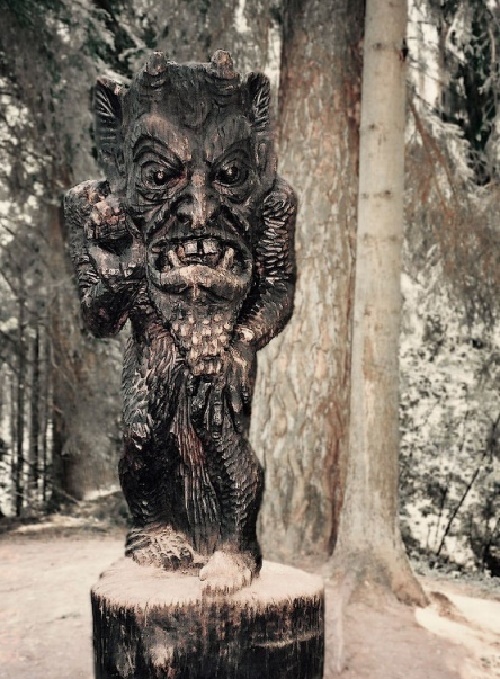 Wooden sculpture on the Hill of Witches