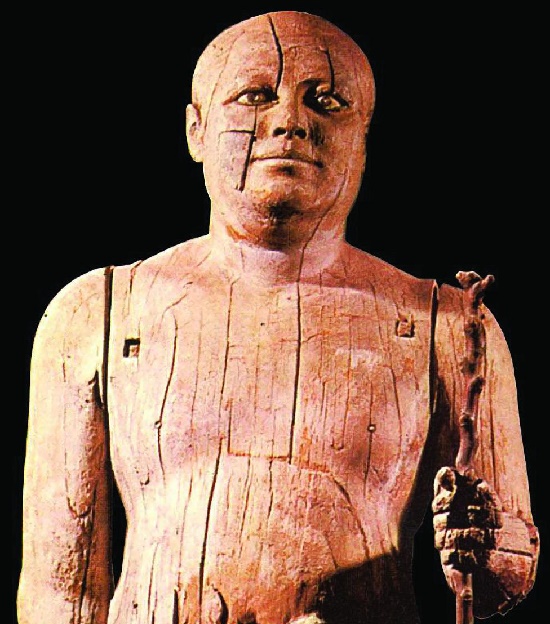 Repository of the soul – Egyptian Ancient Realistic Sculpture
… When archaeologists took a wooden sculpture out of the dungeon, the peasants crowded near the excavations gasped: “This is our village head!”
Before them was an elderly man with a staff in his hand. Full of dignity, he looked calmly and indifferently over the people around him. Scientists Egyptologists and called this statue – “Rural elder”. However, in fact, exact face of Prince Kaapert, who lived … four and a half thousand years ago!
The darkness of the dungeon hid from the human eyes paired statues of Prince Rahotep and his wife Nofret for almost five millennia. During this time, civilizations and states disappeared and emerged, humanity entered the age of space flights, even the recent achievements of science and technology became obsolete, and works of art created in immemorial times are still full of life and immense power of influence.
The more you look at them, the more they fascinate. It seems that these are living people who are thinking about something. The genius of the sculptor vividly captures the beauty and femininity of Nofret, the manly and tragic image of Rakhotep. 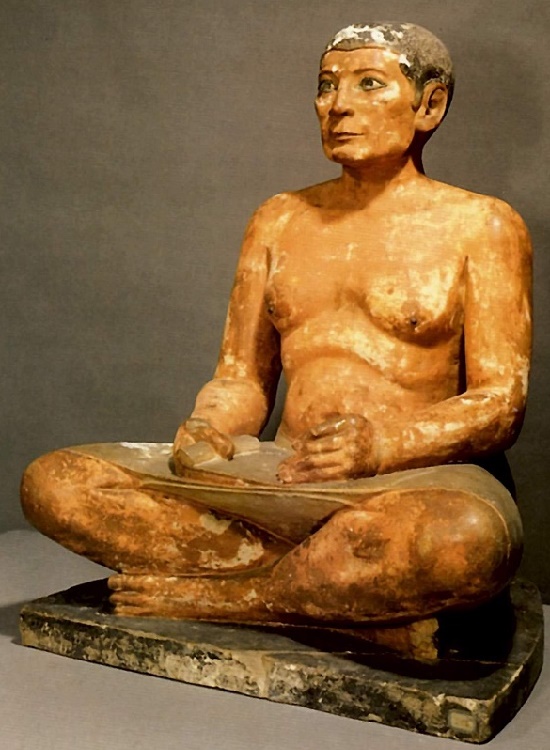 But here is a completely different image, representing to us the less noticeable side of life. This is the famous statue of the scribe Kai. He sits cross-legged, ready to record Pharaoh’s orders. A clever face with thin, compressed lips expresses the servility and cunning of a dexterous courtier. Fattened body, moving deft fingers, frozen in a mute expectation pose impress with truthfulness and perfection of execution. Wide open eyes are so thinly inlaid with alabaster, black stone, silver and rock crystal that they seem real.

“Experienced in my art, superior to all my knowledge … I was able to convey the movement of the figure of a man, the gait of a woman… an expression of the horror of one who is caught sleeping, a spear flies, and the bent gait of a running man. I knew how to make incrustations that were not burned by fire and were not washed off with water. Nobody surpassed me and my eldest son … I saw the creation of his hands … in every precious stone, from silver and gold to ivory and ebony.”
Thus, the sculptor and painter Irtisen, who lived in the 21st century BC, spoke about himself and his son. e.

The desire to overcome the death, which seemed to the Egyptians a violation of the natural course of life, a passionate hope for the further life of the soul gave birth to a funeral cult.

Meanwhile, to the masterpieces of ancient Egyptian art belong the statuettes of the priest Amenhotep and his wife Rannai, located in the Museum of Fine Arts in Moscow. Made of wood these sculptures strike with their realistic beauty. In particular, eyes, necklace, bracelets – inlaid with gold, the clothes are silver-plated. The beauty and femininity of Rannai especially fascinates – the deep humanity of her appearance, tenderness and softness of her outlines. Remarkably transmitted through the light transparent textile her body, beautifully fall on the left shoulder curls of a wig. 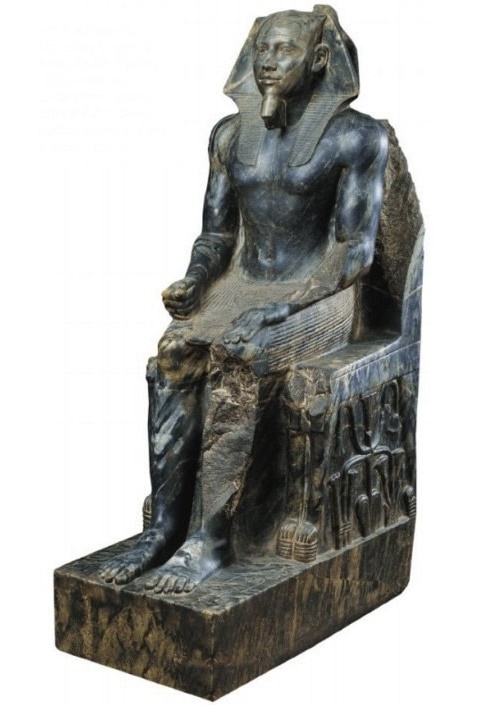 A perfectly preserved statue of Khafre from a dark green diorite. A masterpiece of ancient Egyptian art, accurately conveying the image of the ruler who died a thousand years ago

Undoubtedly, the Egyptians did not think of art without bright and pure colors. Festively decorated architectural buildings, sculptures and reliefs, and the use of mineral paints. In particular, Egyptians extracted white from limestone, black – from soot, red – from red ocher. They obtained green – from a grated malachite, blue from cobalt, copper, grated lapis lazuli, and yellow from yellow ocher. On the walls of the temple of Queen Hatshepsut, the coloring of some reliefs has survived to this day.

Ancient Egyptian artists were characterized by a sense of beauty of life and nature. Their works was a result of both – mathematical calculation and the trepidation of the heart. Besides, they testify to the high spirit lift, and aspiration to perfection. Architects, sculptors, painters demonstrated a fine sense of harmony and a holistic view of the world. According to the “Instructions of Ptahotel”, written fifty centuries ago and studied for many centuries in ancient Egyptian schools, “Art knows no bounds. Can an artist achieve the heights of skill?” 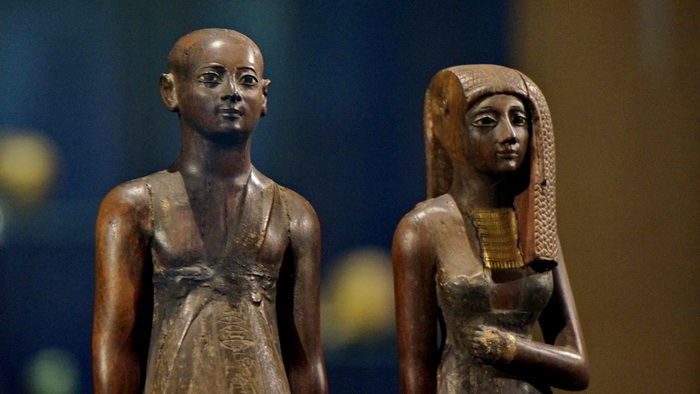 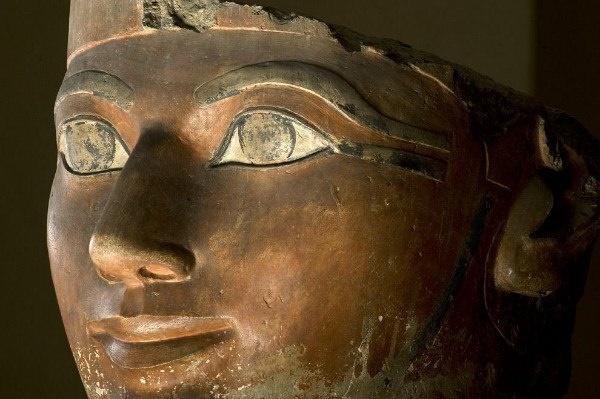 Queen-pharaoh Hatshepsut died in 1458 BC. e. Her death to this day remains a mystery 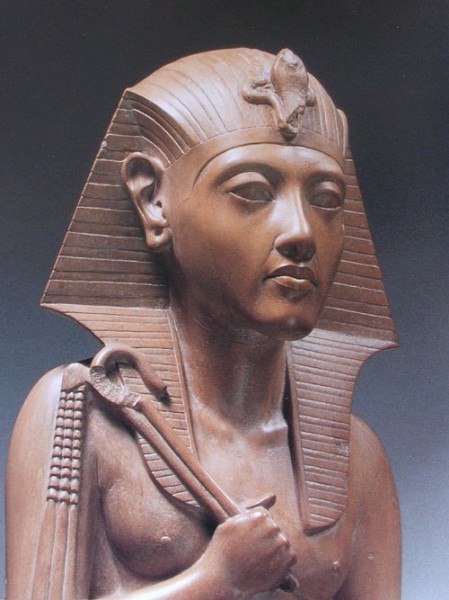 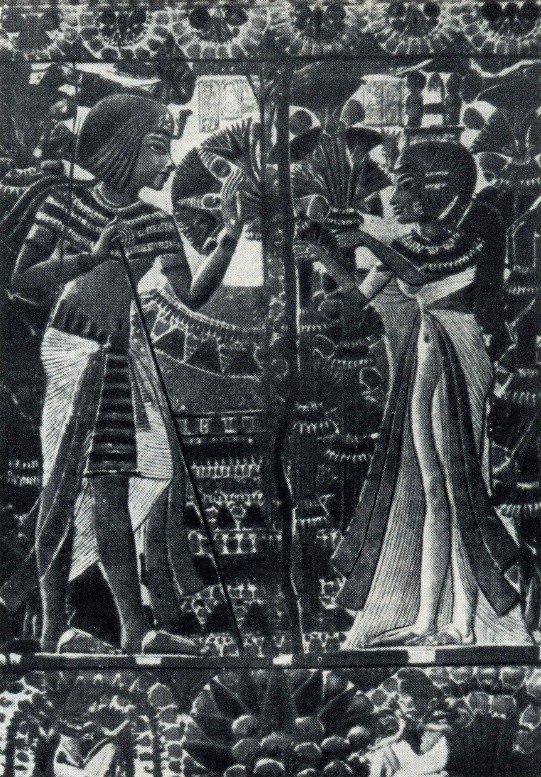 Tutankhamun with his wife in the garden. Relief on the lid of the casket

sources
On a par with the century. A book about foreign sculpture. Volume 5. Moscow. Young guard. 1986
alex-aka-jj.livejournal.com
art.biblioclub.ru