Sculptural ensemble Citizens in the city of Dmitrov, Russia

The ancient Russian city of Dmitrov, founded in the 12th century by Prince Yuri Dolgoruky, is located 65 km from Moscow. In 2003, on the street. Kropotkinskaya (local “Arbat”) was installed a sculptural ensemble “Citizens”, consisting of 5 compositions, depicting representatives of different classes of the city of Dmitrov in the 19th century.

The project was carried out by the architect Galina Gulyaeva and the sculptor Alexei Karaulov. Bronze sculptures are made slightly taller than human height and look very believable, there is a feeling that you are walking with them along the cobbled street of the city.

Here is the sculpture “Peasant”

A peasant woman goes to the market and carries baskets of vegetables for sale (she is also called the gardener girl). The peasant woman is accompanied by a fluffy cat – a favorite of townspeople and tourists. Each sculpture has magical properties. If you rub the cat’s nose, then good luck will smile at you. The cat’s nose is polished to a shine, but the gardener’s nose also shines, it is rubbed to be happy and contented. 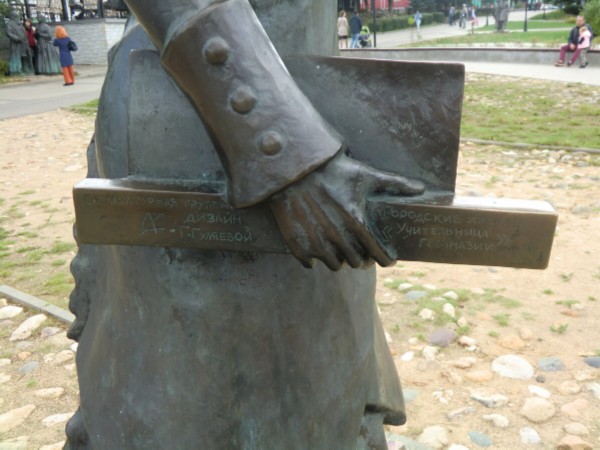 It is necessary to rub the ruler in her right hand or left palm. The sculptor paid special attention to the strict expression on the face of the young teacher and her costume (folds of clothes, buttons). It is no coincidence that this sculpture was installed here; there is a gymnasium on the territory of the Kremlin.

Young man and woman walk side by side, dressed in the fashion of those years. Rubbing their boots on them will make it easier to enter the circle of the elite. Some people call this pair “Pushkin and Natalie”. 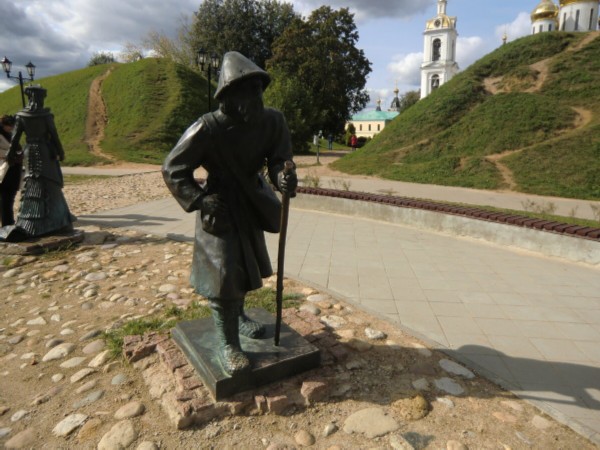 And the sculpture “Bogomolets” will ensure a successful journey if you rub the top of the wanderer’s staff.

The sculptural group “The Merchant and the Merchant” brings wealth. The merchant holds a watch in one hand, and a small chest in the other. To obtain wealth, be sure to rub your watch or chest. All these funny signs amuse people who walk along this street.

Kropotkinskaya Street is a pedestrian street.

Until 1924, the street was called “Dvoryanskaya” (the class name is underlined), which may be why Galina Gulyaeva and Aleksey Karaulov placed the sculptural ensemble “Citizens” on this street. In 2003, the sculptures installed were the first experience in the appearance of household street sculptures. Later, similar works have decorated not a single city. For example, “Dogs in Love” in Krasnodar. Characters from the past help to see the life of Russia in the 19th century, as if we were traveling at that time. Kropotkinskaya Street has become one of the brightest sights of the city of Dmitrov.