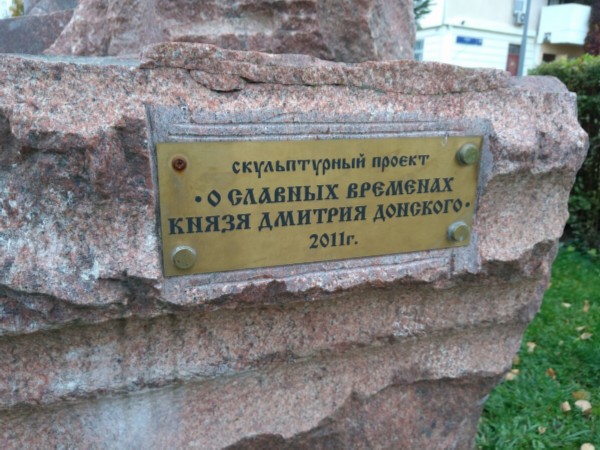 The main street of the Severnoye Butovo district in Moscow is Dmitry Donskoy Boulevard. This is the longest street in the region, with a length of about 2 km. The name of this street is associated with the historical events of the 14th century and the Moscow prince Dmitry Ivanovich Donskoy (1350-1389). According to historical data, the Horde road passed here, along which in 1380 the prince’s soldiers went to the Battle of Kulikovo. It was a decisive battle, which gave rise to the independence of Russia from the Golden Horde and the unification of the Russian lands. The main attraction of this street appeared quite recently.

Dmitry Donskoy Boulevard is not quite a boulevard.

That is, there is no alley with green spaces along the street intended for walking. It has a conditional character, therefore, an alley with a fountain, historical sculptural groups, flower beds and benches was created between houses No. 6 and No. 8. A memorial stone to Prince Dmitry Donskoy and 3 bas-relief compositions were installed: “Blessings by Sergius of Radonezh”, “The Duel of Peresvet with Chelubey” and “The outcome of the Kulikovo battle”.

Built in 2011, they harmoniously complement the theme of this time. Later, a fountain was installed, in the center of which there are 2 granite stones with carved relief compositions depicting the troops of Dmitry Donskoy and the troops of the Tatar Khan Mamai.

The sculptures on the alley reflect moments from the life of Moscow in the 14th century. The head of the project, P.D. Mishanin, and sculptors, V.N. Demchenko, S.V. Panov, V.P. Buinachov, I.N. Novikov, S.A. Smurov, V.A. Chermetov.

Compositions made of granite installed along the pedestrian zone allow you to touch the history of Russia.

Such a park, dedicated to a separate historical theme in Moscow, appeared for the first time in North Butovo.