On October 24, 2009, Lodz Vice-President Vladimir Tomaszewski solemnly unveiled a monument to the traveler bear on Piotrkowska Street – a cute animal with a backpack and a map of the city examines the surroundings.

The prototype for it was the Eared Bear, a famous character in books and cartoons, created by the writer Czeslaw Janczarski and the artist Zbigniew Rychlicky in 1957. At first they wanted to limit themselves to a star built into the paving stones, then they considered the option of a fountain, but as a result they decided to make a “full-fledged monument”.

Its authors are sculptors Magdalena Walczak and Marcin Melczak.

Less than six months later, in January 2010, Mishka lost his paw – it was torn off by a passing snow blower. The paw was found, the sculpture was restored and on May 16, 2010 the monument was reopened by another vice-president of the city – Wieslawa Seewald.

On November 4, 2013, during the renovation of Petrkowska Street, the monument was dismantled and moved to the office of the Tourist Information Center. And on May 20, 2014, Mishka was returned to its original place and its third opening took place. During these six months, the sculpture was renovated and a new nose was attached (the previous one was almost wiped out by tourists). 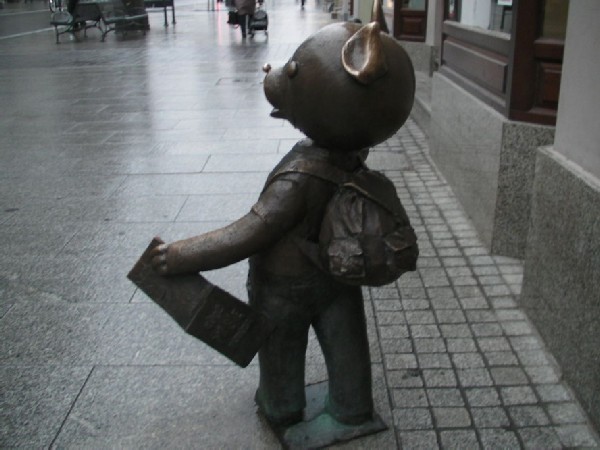 Mishka owes its appearance and increased attention from the “city fathers” to the “Fairy Lodz” project, which was launched in 2009. The project was supposed to create a series of 17 sculptures dedicated to cartoon characters. The first eight monuments were erected in 2009-2013 with funding from the Municipality of Lodz and partly from the European Union. Despite continued funding, the ninth sculpture was erected only in September 2015 (money for it was allocated by a private investor). As of 2018, a total of 10 sculptures have been installed.