The city of Tula is one of the oldest cities in Russia. The first mention of him dates back to 1146. The city is rich in its history. It is known that in the XIV century the city belonged to the Horde queen Taidula, the wife of the powerful Khan Uzbek. In 1503, Tula passed into the possession of John Vasilyevich and became part of the Moscow principality.

In the 17th century, the rapid development of arms production began in Tula. Many craft workshops began to appear, followed by factories.
So in 1879 the Baytsurovsky plant was organized, producing a variety of products from cast iron and copper. It was opened in the Tula Frolovskaya settlement, famous for its craftsmen. The people nicknamed the plant “Baitsurovsky” in honor of the founder – reserve captain Nikolai Grigorievich Dmitriev-Baitsurov.

In 1912, the enterprise became part of the Imperial Tula Arms Plant as a “New” plant, as the Tula people called it. Throughout history, the plant has always been known for both defense and civilian products, not only in Russia, but also abroad. JSC “PO Tula Machine-Building Plant named after Ryabikov” (“Tulamashzavod”) is located on the historical site of the former Baitsurovsky plant on the street. Mosin, 2. This is one of the largest holdings – an enterprise of the military-industrial complex.

Two sculptural compositions were unveiled near Tulamashzavod: “Monument to children-gunsmiths” and “All generations of machine-builders”.

On December 5, 2018, a monument to “Young Tula gunsmiths” was unveiled in honor of the 77th anniversary of the defense of the hero-city of Tula. According to official data, about 20 thousand people live in the Tula region, who worked as children and adolescents at arms factories. General Director of Tulamashzavod Yevgeny Dronov said that during the war, children of 13-16 years old accounted for up to 40% of the number of workers in factories.

The monument is made of bronze, its height together with the granite pedestal is 2.3 meters. The author of the project is a member of the Union of Artists R.F. – sculptor Yuri Uvarkin. He portrayed a boy and a girl in the composition. The boy stood on tiptoe to appear taller and more mature, although he is smaller and younger than the girl. Next to the children are anti-tank rifles, one of them is held by the girl with her hand, as well as 3 “Maxim” machine guns, one of which the teenager assembles on a workbench. According to the sculptor, there were no models for the composition – this is a collective image of “children of war”. 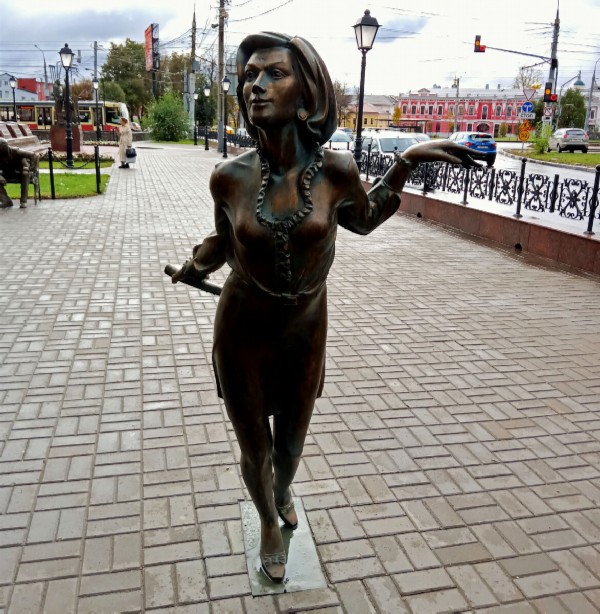 On July 4, 2019, the grand opening of the unusual sculptural group “All Generations of Machine Builders”, dedicated to the 80th anniversary of the plant, took place on the site in front of the checkpoints of the Tulamash plant.

The holiday began with everyone’s favorite song from the movie “Spring on Zarechnaya Street” about the factory entrance. The plant employs people of different generations. And this sculptural composition is dedicated to everyone who crossed the factory checkpoints for 80 years.

An elderly man sits on a bench; he is clearly retired, but continues to work. He sat down to rest after the shift, was thinking about something and was waiting for his comrades.

A young man with flowers is waiting for his girlfriend, and the girl is in a hurry and is afraid to be late for work, or maybe runs to the guy standing with flowers. Yuri Uvarkin also became the author of this sculptural composition.

The golden plate reads: “Dedicated to all generations of machine builders – past, present and future – going through the factory checkpoints.” The composition turned out to be very vital and liked by the employees of the plant, Tula residents and guests of the city. Many are photographed next to the heroes of this sculptural composition.