The sculpture of the mythological bird Sirin appeared in the Russian city of Sterlitamak in 2015. According to the Slavic and, in particular Russian mythology, Sirin is a wonderful bird of paradise, possessing a charming voice. In medieval Russian legends, sometimes it flies to earth and sings prophetic songs about the coming bliss, but sometimes these songs can prove harmful to a person – you can lose your mind. Therefore, in some legends, Sirin acquires a negative value, so that it even begins to be considered a dark bird, a messenger of the underworld. The Sirin bird is afraid of loud sounds, so to scare it off, people ring bells, shoot guns, and blow trumpets.
The author of the sculpture is Valentin Mikhailovich Rechikov, St. Petersburg. Born in 1954 in the village of Volovo, Moscow Region – Meshchera on the river Pra. He graduated from the Higher Art and Industrial School of VI Mukhina in 1991. Participant of more than 100 exhibitions and more than 10 symposia on stone, wood in Russia and abroad.


An unusual monument is at the Vvedensky cemetery in Moscow. This is an amazing gravestone of swaying the wings Bird Sirin on the grave of writer Mikhail Prishvin. The author of the monument – a famous Russian sculptor Sergei Konenkov. Tipping its head, a fairy bird sings along with trees and animals, about which Mikhail Prishvin wrote “the singer of Russian nature.”

Another sculpture “The Sirin Bird” appeared in the city of Veliky Novgorod on Alexander Nevsky embankment in 2012. A fairy bird, however, sits in a cage. And on the cage sits another bird – blue, small, with a male face and guards the captive. “Miracle behind bars” – so the city rumor soon called this sculpture. Since the Sirin bird should sing about future joy, among townspeople appeared a tradition to throw coins into the cage for luck. The author of the composition is the Novgorod sculptor Vyacheslav Smirnov.

Another interesting work – the bronze sculpture of the poet Nikolai Klyuyev on the Red Hill. St. Petersburg master Sergei Alipov captured the “singer of the Olonets hut” with a staff in his hands over the abyss and with the bird Sirin on his shoulder. Master designed the model of the monument 23 years ago. However, it became possible to implement it only now, when the district administration allocated two million rubles from the budget. In addition, admirers of Klyuev’s talent are not going to stop only at the installation of the monument. Next to this territory they created a dendrological park, where you can see the plants sung in his poetry.

You can not ignore the Dmitrievsky cathedral of the city of Vladimir (sometimes in literature you can find the name “Dmitrovsky”) – a court cathedral consecrated in honor of the Great Martyr Demetrius of Thessalonica. Canonical example of the cross-domed white stone temple of the Vladimir-Suzdal architectural school. Noteworthy, in 1992 it entered the list of UNESCO World Heritage Sites. Importantly, the Cathedral is famous for its white stone carvings. In particular, about 600 reliefs depicting saints, mythical and real animals decorate its walls. Mostly preserved in their original form, however, some were replaced during the restoration of the XIX century. The glorification of princely power was the main idea of ​​the facade sculpture of the cathedral, therefore, it depicts many heraldic symbols – lions, eagles, griffins, centaurs, and of course, the mythological bird Sirin. In connection with the rich white stone decoration, which almost completely envelops the temple walls, the temple has also a name “The White Stone book”.

An interesting monument is the work of the Armenian sculptor Ara Armenovich Arutyunyan. Born in Yerevan on March 28, 1928, Arutyunyan – an outstanding sculptor-monumentalist, People’s Artist of Armenia, Corresponding Member of the Academy of Arts of the USSR and the Russian Federation. Secretary of the Union of Artists of the USSR, Professor, Arutyunyan is the founder of architectural and sculptural ensembles in Soviet Armenia, the author of grandiose monuments, city monuments, easel sculpture and brilliant graphics. 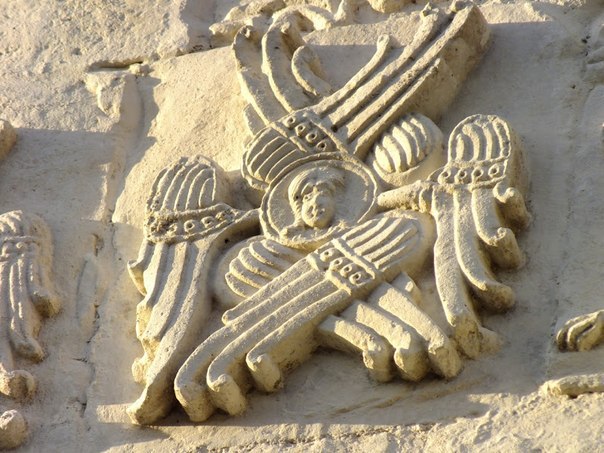