Monument to Russian princes Boris and Gleb in Dmitrov, Russia

In the town of Dmitrov near Moscow, near the majestic walls of the Borisoglebsk Monastery in 2006, a monument to the Russian princes Boris and Gleb was solemnly unveiled. The opening of the monument was timed to coincide with the 600th anniversary of the monastery. In terms of emotionality and beauty, this monument is not inferior to the famous monuments in Moscow.

The authors of the project are sculptor Alexander Iulianovich Rukavishnikov and architect Rostislav Viktorovich Narsky (1951-2017). Alexander Rukavishnikov managed to create a unique artistic concept. Two figures of horsemen are placed on one pedestal at once. 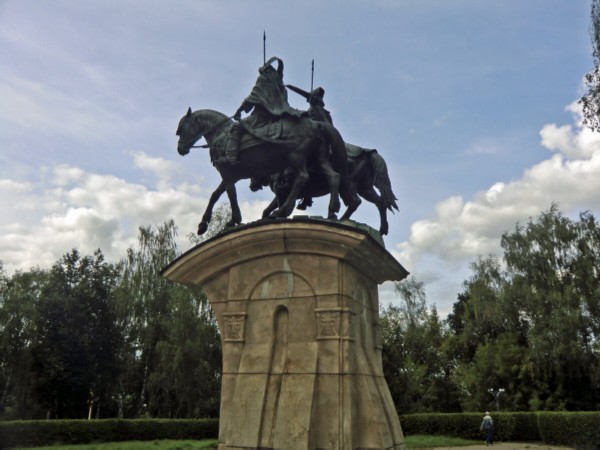 This technique, used in sculpture, is quite rare.

Alexander Rukavishnikov showed the heroes of the Middle Ages as strong, strong Russians, defenders of their principalities. He portrayed Boris and Gleb in military clothes. Two young princes on war horses, holding pikes with a developing banner in their hands they are ready for battle. Boris as a senior is half a step ahead of Gleb. A beautiful bronze composition was cast in Solnechnogorsk.

On the night before the Battle of the Neva in 1240, one soldier had a vision a floating boat, in which stood Saints Boris and Gleb. Saint Boris said: “Brother Gleb was led to row faster! Let’s help our relative Alexander.” The next day, the Russian army defeated the Swedes in an unequal struggle, and Prince Alexander received the nickname Nevsky.