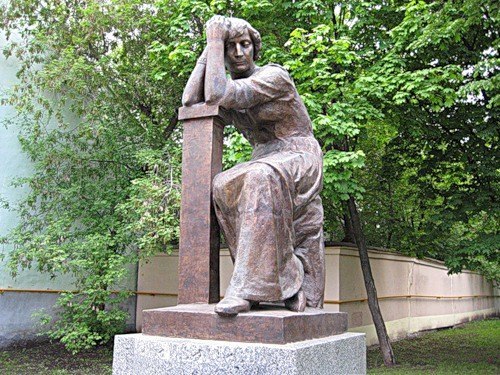 Located opposite the house-museum of the poetess monument. The house from which she left for emigration. Tsvetaeva is sitting and looking thoughtfully at the Moscow street (sculptor N. Matveeva, architect S. Buritsky and A. Dubovsky). Installed in 2007 to the 115th anniversary of the birth of the poetess. Story behind Marina Tsvetaeva monument

Story behind Marina Tsvetaeva monument
125 years ago, on October 8, 1892, the poetess Marina Ivanovna Tsvetaeva was born in Moscow. Russian poet, rightfully considered one of the most outstanding representatives of the Silver Age. Tsvetaeva wrote her first poems at the age of six, not only in Russian. Many of her creations put on music became popular romances. Meanwhile, her personal life influenced Marina Tsvetaeva’s poetry very much. Indeed, she wrote most of her best poems about love in moments of strong emotional experiences.
The first monument of M. Tsvetaeva (sculptor Yuri Soldatov) appeared in 1992 in Bashkortostan, near the town of Belibey, in the village of Usen-Ivanovo. In the summer of 1911, 18-year-old Marina spent two months here with Sergei Efron. 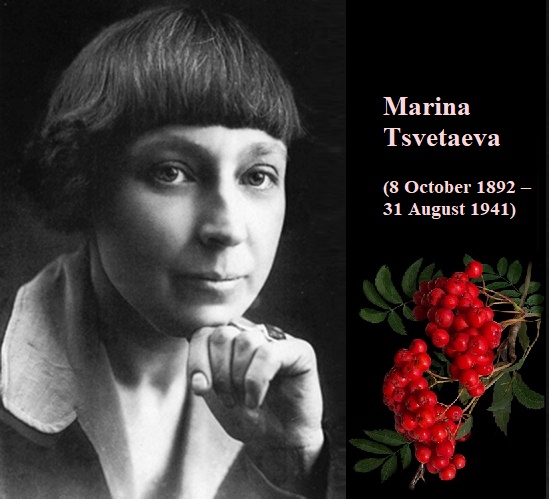 Six years later, in 2006, a monument to M. Tsvetaeva appeared in Tarusa (sculptor Yuri Soskiev, architect Boris Messerer). On the high bank of the Oka, next to the figure of the poetess – a living tree of red mountain ash.
According to Boris Messerer, her image was hovering over them, “we admire her genius and bow our heads before her great and tragic fate.”

Besides, the fundamental monument of M. Tsvetaeva created by Zurab Tsereteli in the summer of 2011 appeared in France. In particular, in the resort town of Croix de Vie (also Saint-Gilles-sur-Vie) on the Atlantic coast, where the poet rested in 1926 and from where she wrote her letters to Boris Pasternak.

And in 2013 in the sculpture garden of the Odessa Literary Museum appeared figures of two poetesses – a monument to Anna Akhmatova and Marina Tsvetaeva (sculptor Oleg Chernoivanov). The creators executed the monument in the Egyptian style – the pedestal decorated with a pyramid and ankh, combined with the clothes and hairdress of the main characters, at the feet of them leopards are sitting.

Few people know that the Orthodox Church recognized Tsvetaeva as worthy of forgiveness and participation.
According to the canonical rules of the Orthodox Church, suicides are buried without a church funeral service, and requiems. However, in 1991, on the day of the fiftieth anniversary of the death of Marina Tsvetaeva, the Moscow Church of the Ascension of the Nikitsky Gate, performed a service for the servant of God’s Marina. Of course, with the blessing of the late Patriarch of Moscow and All Russia Alexy II. 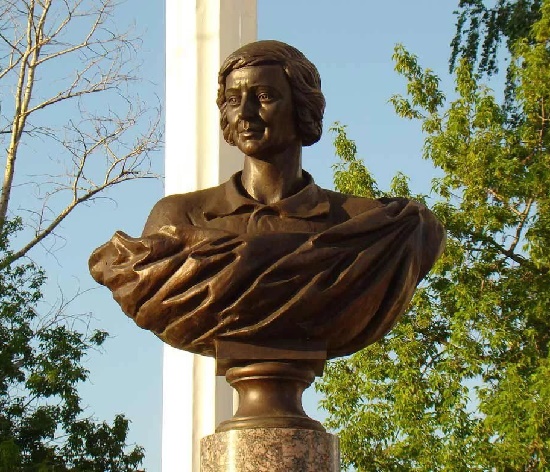 Great poets, together with the gift of creating poems, probably have a special subtlety of psychic organization. A special susceptibility to the inspiration of certain forces that give birth to inspiration (Tsvetaeva calls them “elements”). In addition, she had the ability to subtlely grasp the essence of things and express it in words. The ability to see the soul of another person, to understand and love it, allowing it to come true in verse. “To love is to see a person in the way God conceived him and his parents did not realize,” Tsvetaeva wrote in her diary in 1918.

Undoubtedly, the oppressed state in which Marina Tsvetaeva was preceding her death. After careful consideration of all the circumstances of the death of Marina Tsvetaeva, His Holiness Patriarch Alexy II blessed her. For Marina Tsvetayeva was service of worship on August 31 (the day of her death) in 1990 in Yelabuga. And since 1991, this day, a memorial service take place in the Great Ascension Cathedral near the Nikitsky Gate in Moscow. 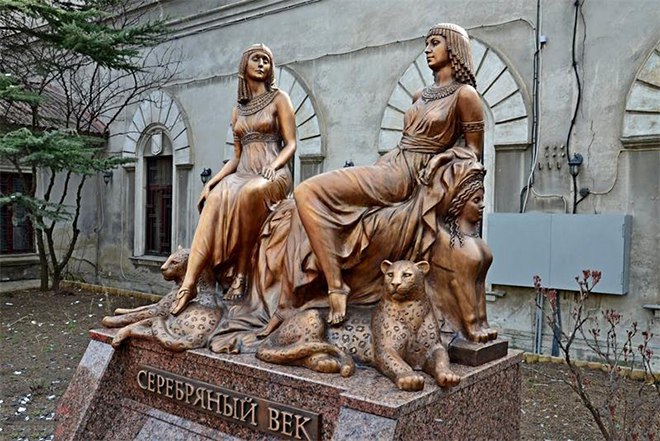 Anna Akhmatova and Marina Tsvetaeva in the images of the Egyptians. Monument ‘Silver Age’ 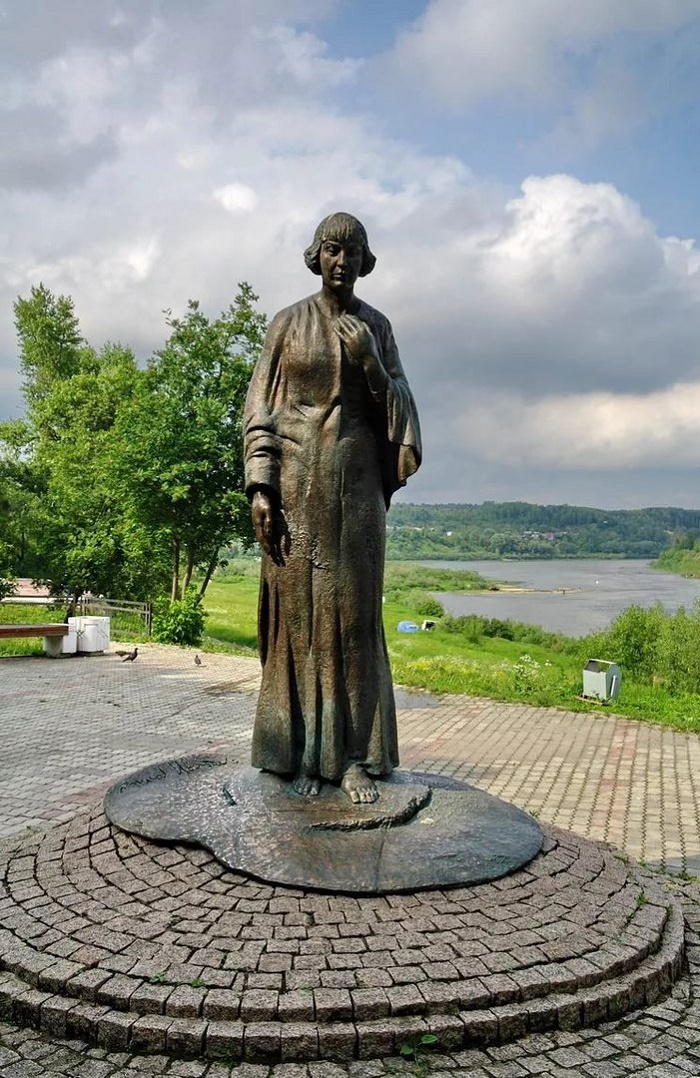 Opened in 2006 in Tarusa monument to M. Tsvetaeva (sculptor Yuri Soskiev, architect Boris Messerer). On the high bank of the Oka, next to the figure of the poetess – a living tree of red mountain ash 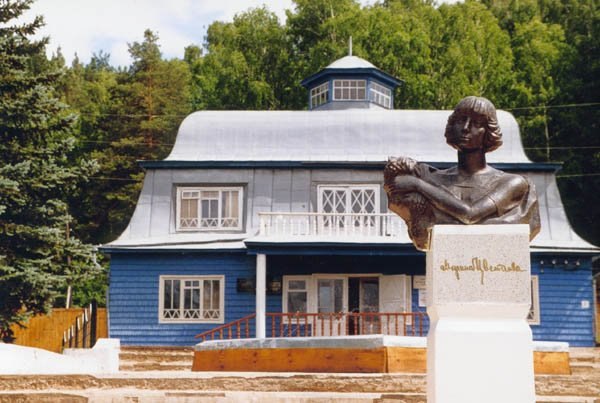 The first monument of M. Tsvetaeva (sculptor Yuri Soldatov) installed in 1992 in Bashkortostan, in the village of Usen-Ivanovo 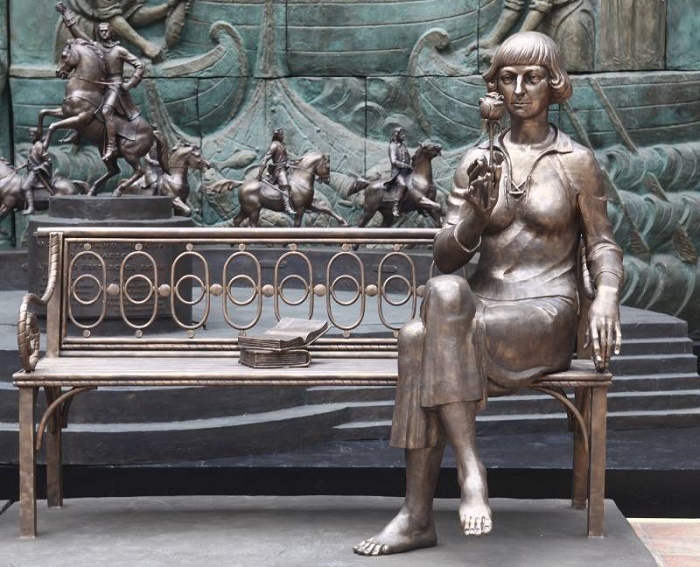 Installed in the summer of 2011 in France monument of M. Tsvetaeva (sculptor Zurab Tsereteli) 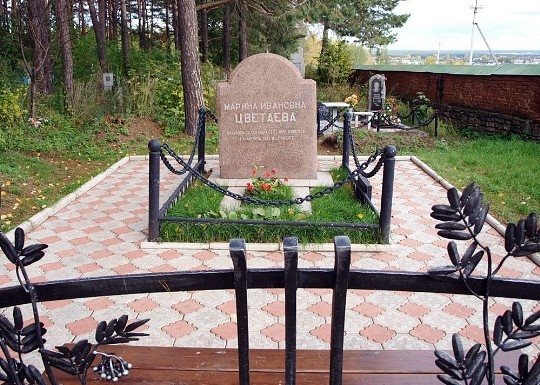 Tsvetaeva’s grave in the city of Elabuga