Many Russians know the story “Lefty” by Nikolai Semenovich Leskov, written in the style of a fairy tale. The monument is dedicated to the protagonist of this story.

About the Monument to Lefty

In May 2009 in Tula, the administration of Tulamashzavod presented the city with a sculpture “Lefty a symbol of working skill”, which stood on the territory of the plant and moved it to st. Mosin, 2. The city of Tula has been a large industrial center since the 18th century. Lefty Leskova is a national hero for the residents of the city. The issue of creating a monument to Lefty was actively discussed in the 80s. last century.

A competition was held and the best option was chosen. The sculptor Bronislav Krivokhin became the author of the project. In 1989, Levsha’s sculpture was cast in bronze at Tulamashzavod and stood on the territory of the plant for almost 20 years, residents and guests of the city could not see the sculpture. Now it is impossible not to notice the monument. The Lefty’s figure is set on a large pedestal faced with red granite. The stone base is in the shape of a hexagon, with quotes carved on each face.

The left-hander stands tall, dressed in simple work clothes and a traditional protective apron, and his hair is braided from his forehead. In one hand he holds a hammer, and in the other his work a shod flea. It is believed that the literary Lefty had a real prototype that inspired Nikolai Leskov to create a story this is the Tula master Alexei Surin. But Leskov himself did not write about this anywhere. The bronze monument to the Lefty in Tula is a collective image of the armorer.

Opening of the monument

On September 9, 2016, on the day of the city of Tula, the Soviet art object “Horseshoe of Happiness” was opened on the Upa embankment. The horseshoe project was developed by a member of the Union of Designers of Russia O.V. Balakina. They tried to make the appearance of the horseshoe in the same style with the surrounding objects the fence of the plant, the rotunda, the bridge, etc.

The specialists of Tulamashzavod have embodied in bronze with granite edging a small architectural form, referring to the work of N.S. Leskova a mastery lesson from a Tula craftsman by a stranger. Also, the horseshoe symbolizes the happiness of the family hearth everything for which the masters of the ancient city of Tula work. 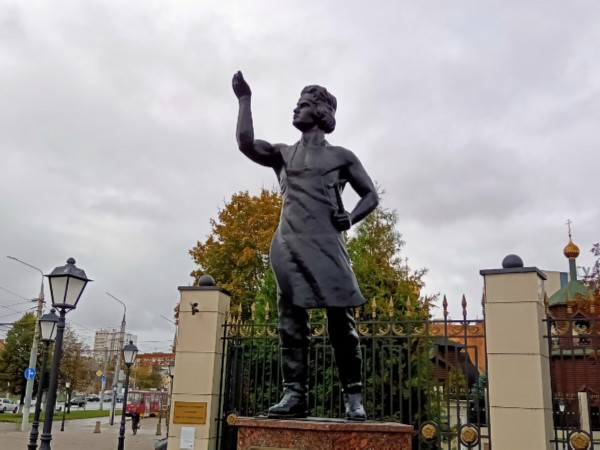