In 2008, the Tsar’s Gate (Alexander’s Triumphal Arch) was solemnly restored in Krasnodar.

The gate was put in a new place. In their original form, on both sides of the central arch of the gate, icons with lamps were placed under the decorative elements of the roof (large kokoshniks) the image of Alexander Nevsky the patron saint of the Russian army and the image of Catherine the Great Martyr, the patron saint of the city. At present, the image of St. Alexander Nevsky remains on the gate, but there is no image of St. Catherine on the gate.

In April 2009 on the street. Red was erected a monument to St. Catherine

The square on which the monument is erected is divided by paths into 4 segments and forms a cross. For a long time, the Holy Great Martyr Catherine was revered in the Kuban as an example of a benefactor and asked for help in good deeds. St. Catherine lived in Alexandria in the 4th century, possessed a rare beauty and intelligence, and received an excellent education.

There is a legend that after baptism, Christ appeared to young Catherine in a dream, gave the ring and called her his bride. Catherine came to the temple during the festive sacrifice. Maximin was struck by her beauty and tried to persuade her to abandon the Christian faith by seeking the help of philosophers. But the girl, in a dispute with the philosophers, defeated them. He once again tried to convince Catherine to worship the pagan gods, but could not achieve this. 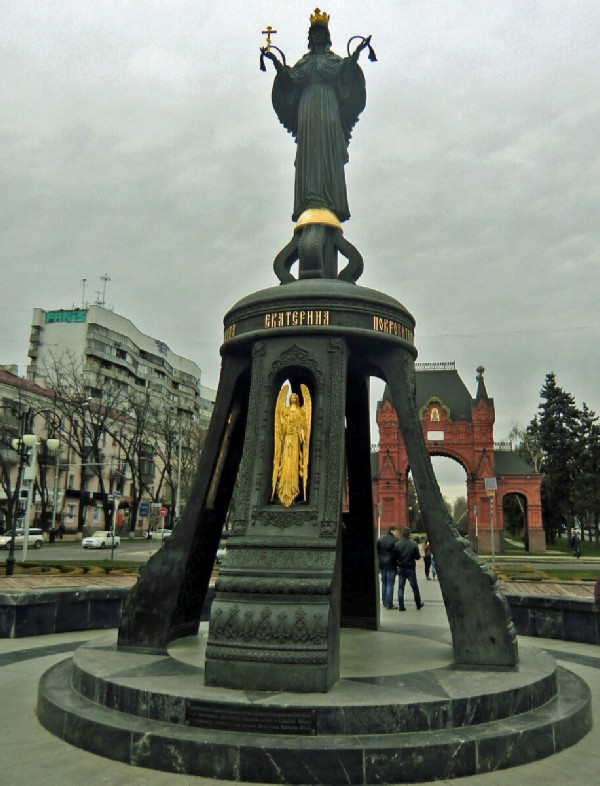 The authors of the monument to St. Catherine in Krasnodar are Moscow sculptors-spouses Vitaly Shanov and Daria Uspenskaya.

St. Catherine is installed on a high pedestal-bell, which is decorated with figures of 4 gilded angels, placed in small niches. As conceived by the authors, you can enter the bell inside and after passing through it, you can feel yourself under the patronage of St. Catherine. Catherine holds a cross in her hands, and she has a crown on her head. The sculpture is made of bronze and is 8 meters high.

There is a belief that in order to find a life partner, you need to pray to St. Catherine. The monument to the Holy Great Martyr Catherine is a favorite place for citizens and guests of the city. The newlyweds come to the monument on their wedding day, pass under the bell, ask to bless and strengthen their union.