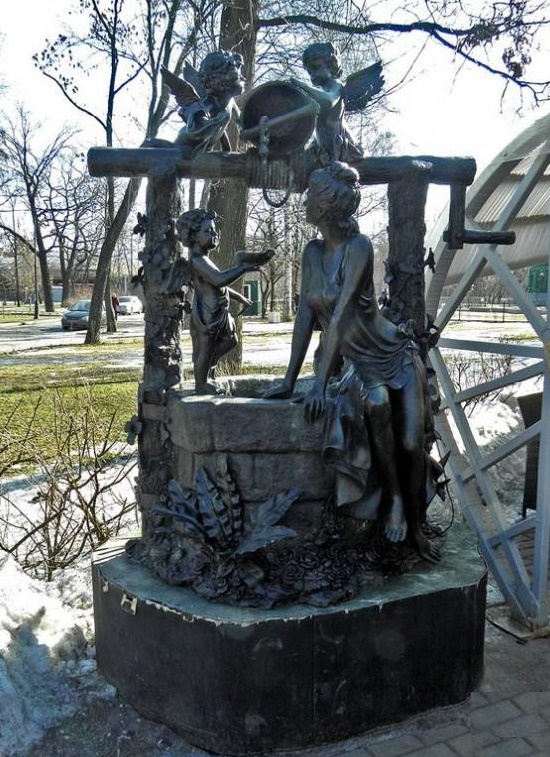 In general, angels live only in heaven. However, immortalized in monuments, angels may live anywhere – from cemeteries and crypts to gardens and streets. For instance, St. Petersburg angels, known also as Well Angels. By nature, the angels are patrons and protectors of people. And descend from heaven to earth St. Petersburg angels can help the suffering and will not let die of thirst. They are guardian angels of the source with life-giving moisture. According to the locals, if you wash your face with the water from this fountain, you will feel better. Some even believe in the full recovery of possible illness. Besides, you can make a wish – and it will come true.
Undoubtedly, the Fountain “Well of Angels” is one of the unusual architectural sights of St. Petersburg. The sculptural composition around the fountain consists of several figures. In particular, a beautiful girl and five angels who help her to draw water in the well. 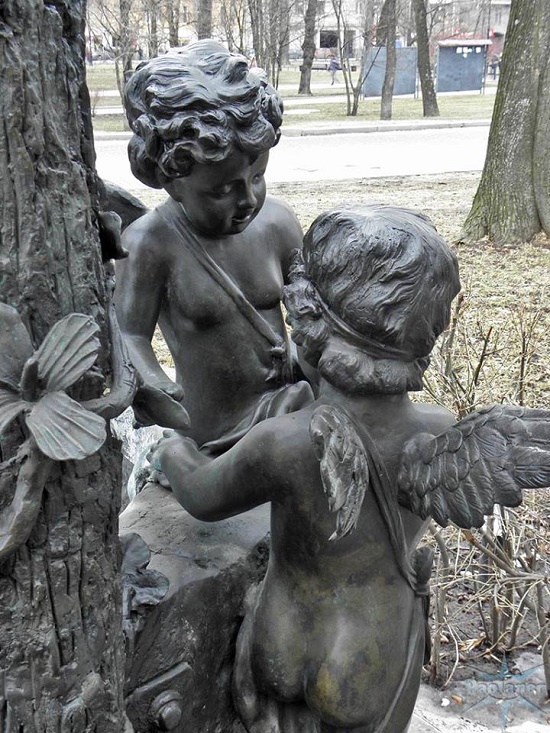 Alexander Park, located in the Petrogradsky district of St. Petersburg, is one of the first public parks in the city. Founded in 1842, the park is located on the site of the former glacis of the Peter and Paul Fortress to the north of the kronverk, bordered by Kronverkskiy Prospect, Kronverkskaya Embankment and Kamennoostrovsky Avenue.

Meanwhile, St. Petersburg citizens consider their beautiful city to be guarded by angels. Every Petersburger knows this. And each angel of the city has its own history and its unique features.

Angel on the roof of the Lithuanian consulate – Funny figure sits on the roof slope. It is unique: the face of an angel is the face of a real child. Interestingly, the angel himself is all white, and his heels are black. They say that if you look at it for a long time, you can see how he winks. Accordingly, if the angel winks – wait for the good news.

Angels of the church of St. Catherine. The main facade of the building in the form of a monumental arch portal, which rests on free-standing columns. Above the facade is a high parapet, on which are the figures of the four evangelists and angels holding the cross.

Among other most famous monuments are 3 guardian angels in St. Petersburg. In particular, Statue of the Apostle Matvey (Saint Isaac’s Cathedral), the Angel of the Lutheran Church of St. Petri, Angel of the Alexander Column (Palace Square), Flying Angel (Spire of the Peter and Paul Cathedral), and the St. Petersburg Angel. The latter, in fact, is a collective image of the elderly people of Leningrad, who have a special spiritual culture and intelligence. In the hands of the hero – an umbrella, one of the unofficial symbols of the city. Address: Izmailovsky Gardens, Fontanka embankment, 114

Happy Well of Angels and notable sculptures of angels in St. Petersburg 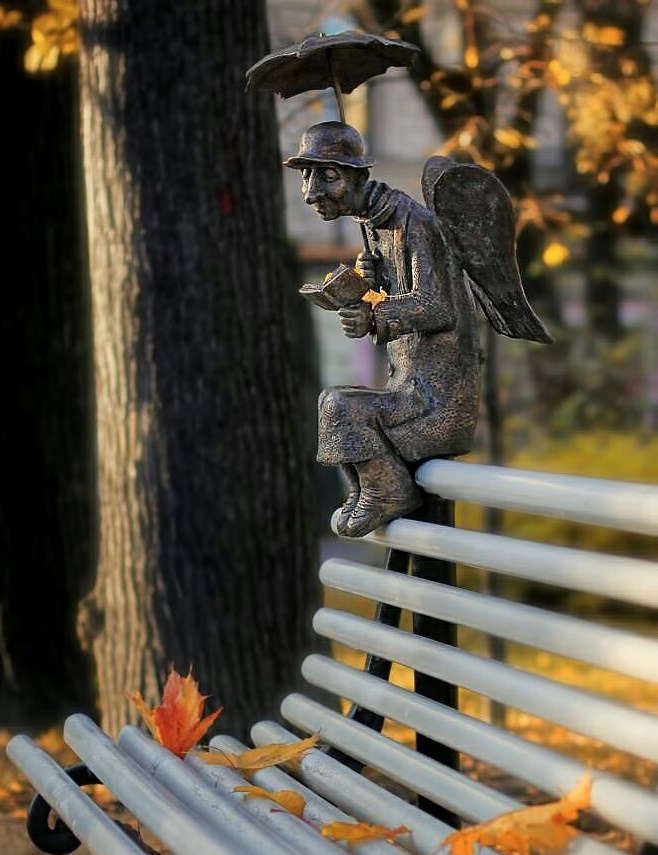 A collective image of the elderly people of Leningrad – St. Petersburg Angel 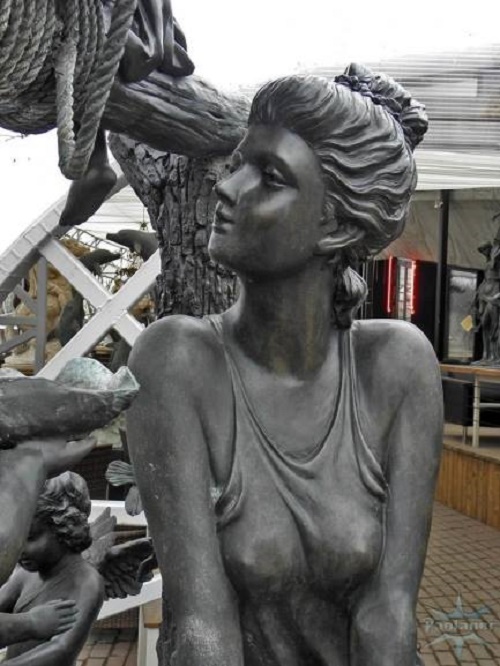 A figure of a beautiful girl, detail of Happy Well of Angels in St. Petersburg 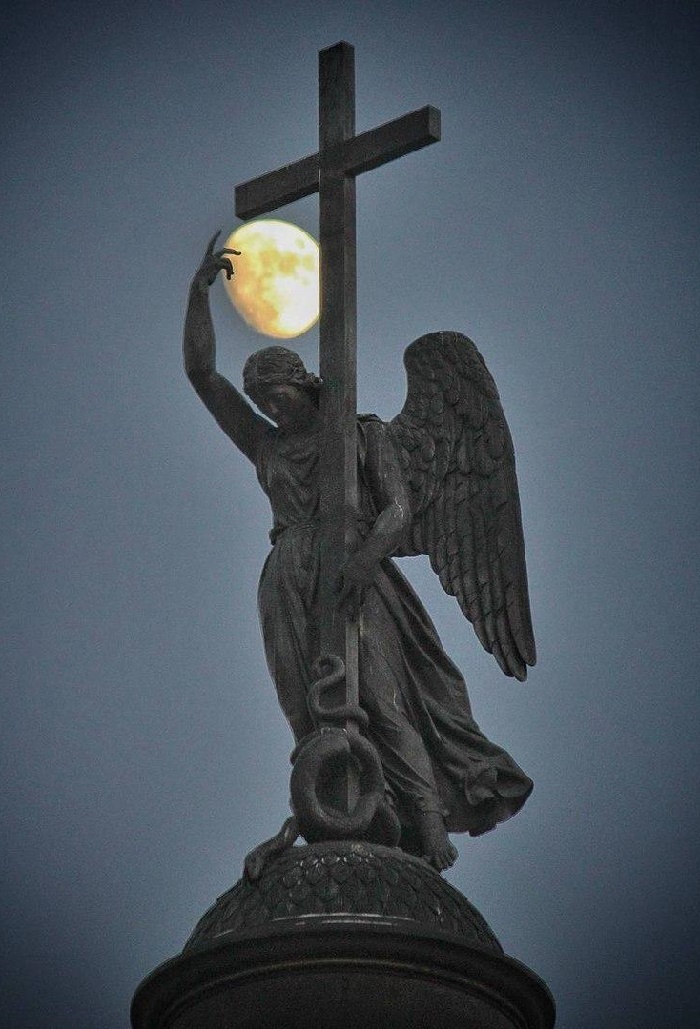 Angel of the Alexander Column 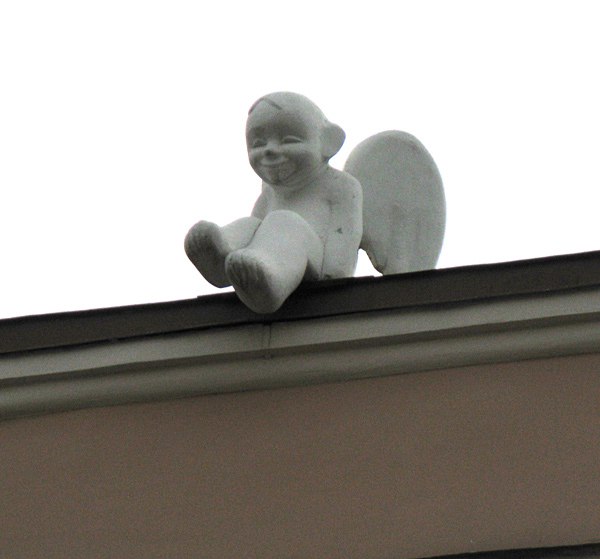 Cute Angel on the roof of the Lithuanian consulate 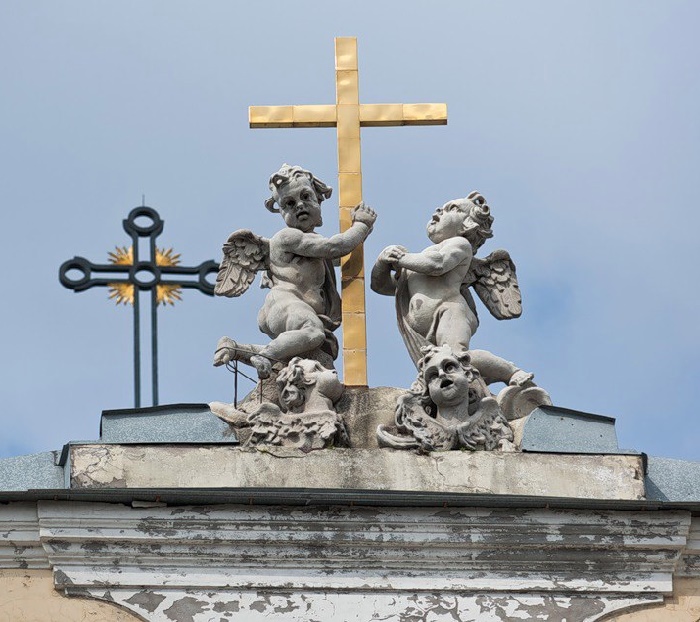 The church of St. Catherine 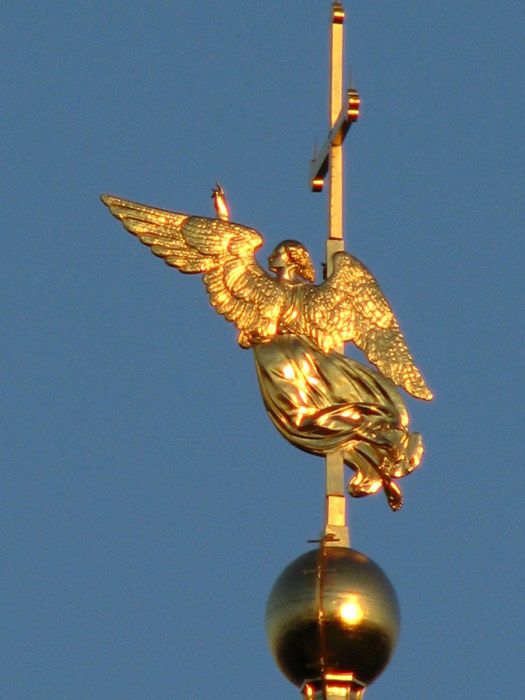 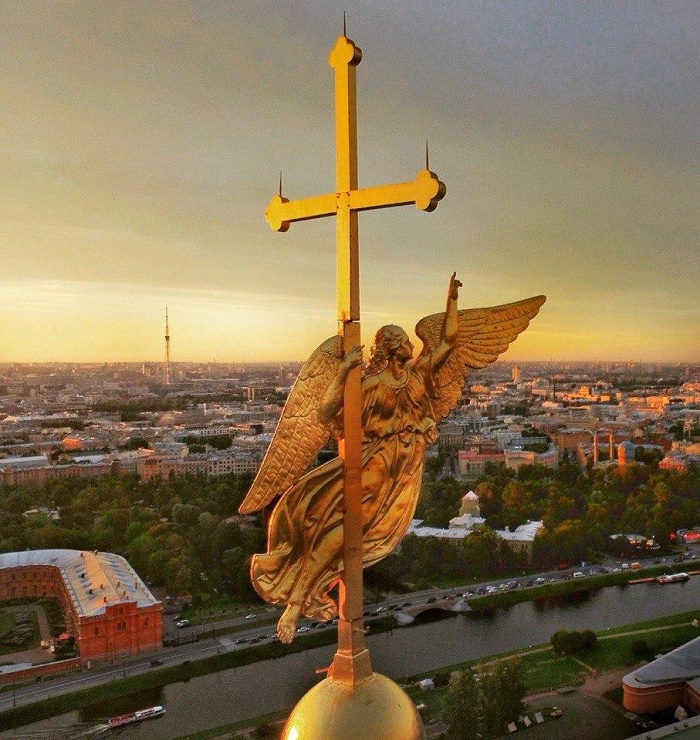 Flying over the city angel 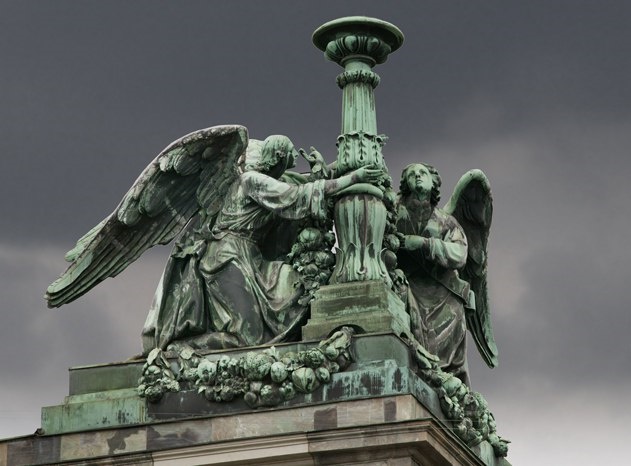 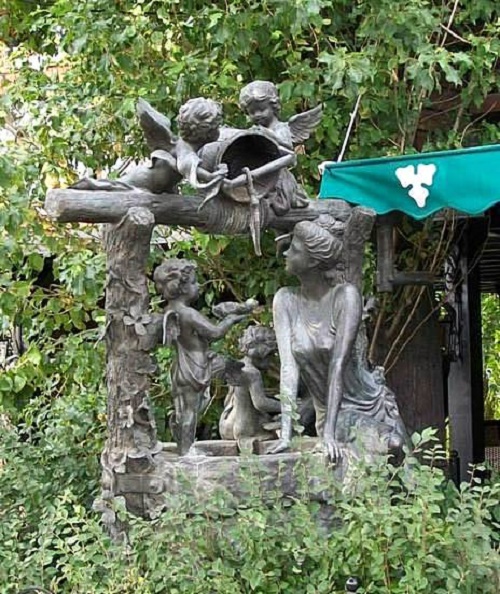 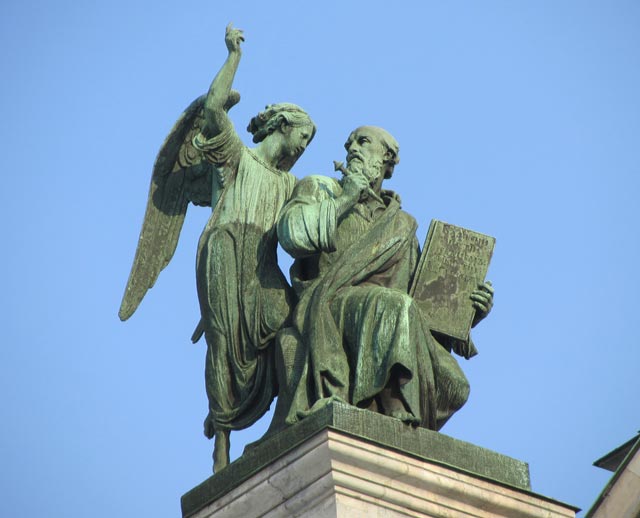 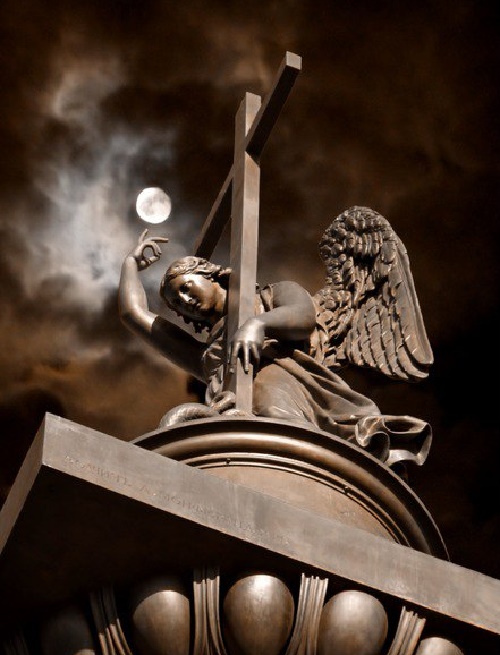 The figure of an angel, the work of the sculptor Boris Orlovsky 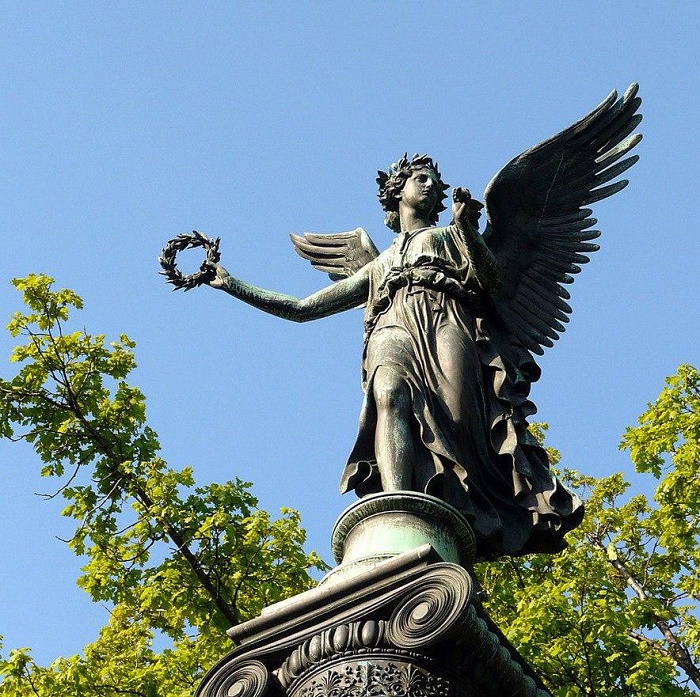 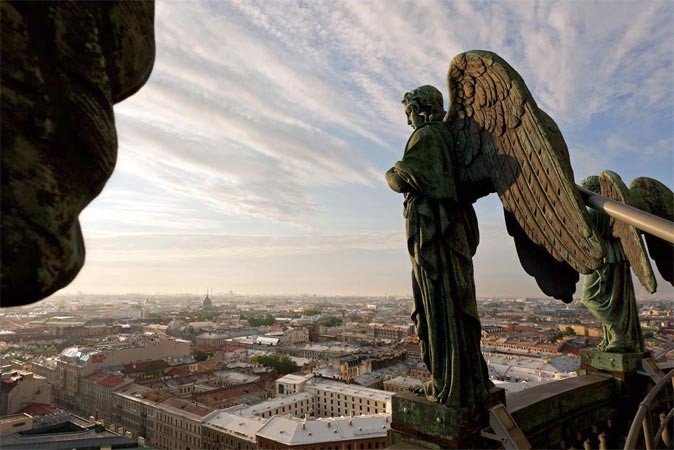 The Northern capital of Russia – under protection of angels. Saint Isaac’s Cathedral 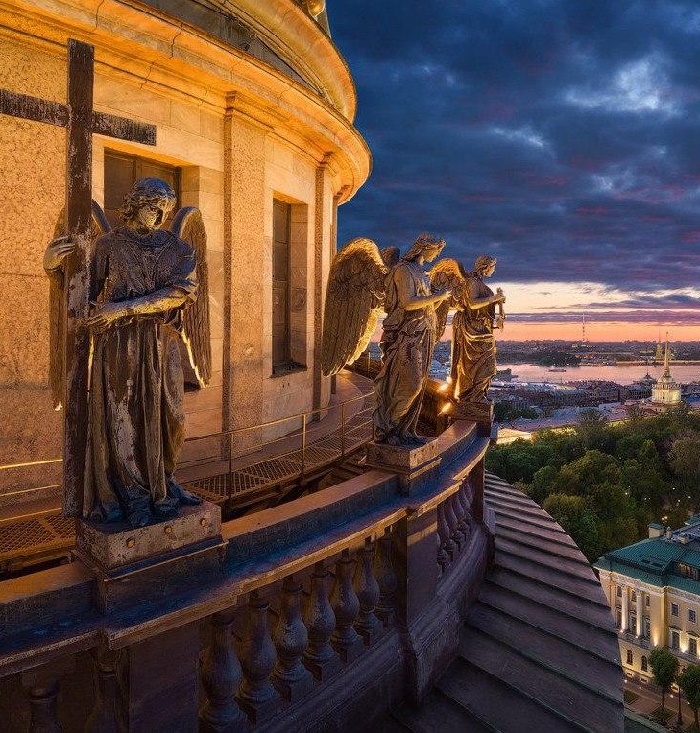 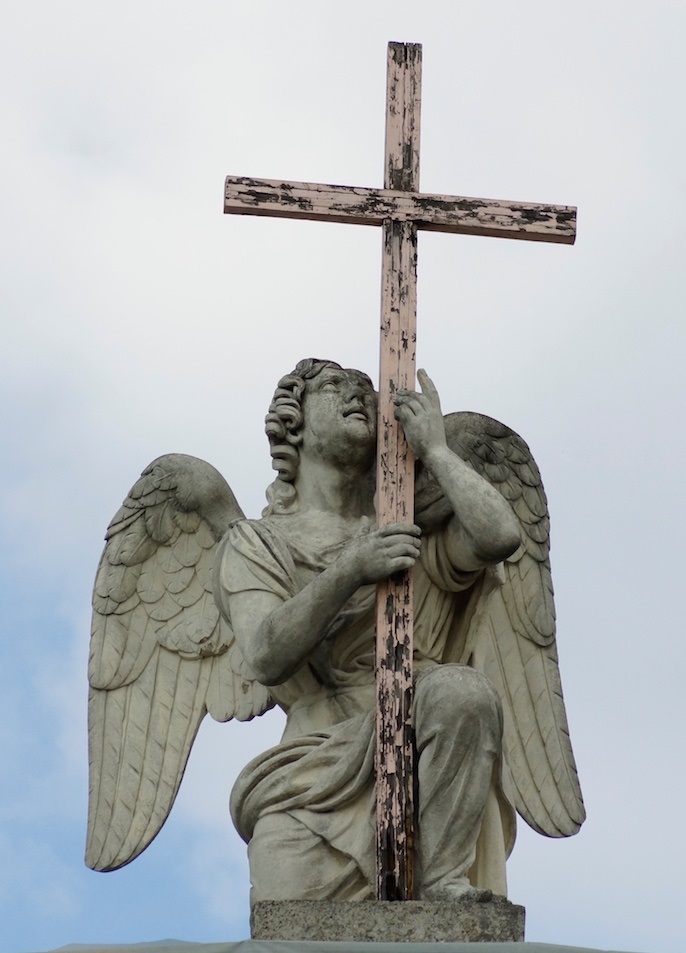 The sculpture of angel on the Lutheran Church of St. Peteri