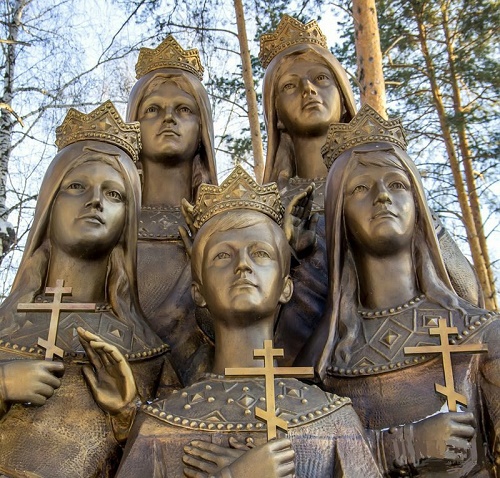 Monument to the children of Russian Tsar Nicholas II was solemnly unveiled on the territory of the Orthodox monastery of the Holy Royal Passion-Bearers on Ganina Yama on November 16, 2011. Besides, it is the site of a mine in which the remains of the royal family and their confidants were discovered.
The author of the bronze monument – Igor Vladimirovich Akimov, Ural sculptor, teacher at the Ural State Architectural Academy. The height of the monument is about three meters, and the weight is almost three tons. According to the author’s intention, counted to the rank of holy martyrs, the royal children Princesses Olga, Tatiana, Maria, Anastasia and Prince Alexei as if descending from heaven with crosses in their hands on an inclined stone slab that serves as a pedestal. However, not exactly.
END_OF_DOCUMENT_TOKEN_TO_BE_REPLACED 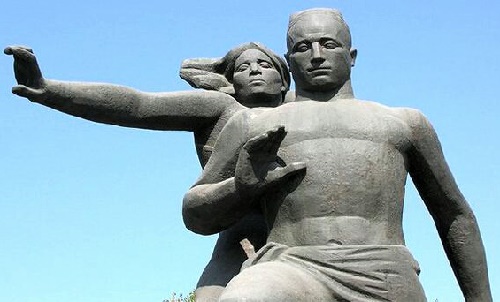 One of the most significant monuments in the capital of Uzbekistan, Tashkent, is “Courage” – Monumental complex dedicated to 1966 earthquake. It stands at the intersection of Sharaf Rashidov avenue (in Soviet times Lenin Avenue) and Abdullah Kadiri street.
At 5:24, on April 26, 1966, an earthquake measuring 8,3 points on the Richter scale shook the city. The strongest seismic impact changed the face of the city forever. Noteworthy, the epicenter of the earthquake was at a depth of about ten kilometers right under the central districts of Tashkent. Accordingly, the “Courage” monument appeared later approximately on this place.
Interestingly, the tragic event which took place on 26 April 1966 has mystic symbols, I mean 26 April – Chernobyl tragedy (1986), and the year 1966 speaks for itself.
END_OF_DOCUMENT_TOKEN_TO_BE_REPLACED 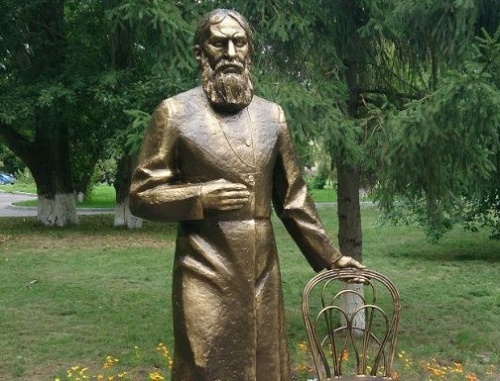 On the territory of the modern perinatal center in Tyumen appeared a monument to Grigory Rasputin. The place was not chosen by chance: it is here the old man was undergoing treatment after being stabbed in the stomach in 1914, and then worked as an orderly. The statue of an old man in a full-length, the hand rests on on a Viennese chair, which according to legend, helped him to heal men’s disease. Rasputin – known historical figure, and he deserves this monument. According to Tyumen sculptor Vladimir Zolotukhin, he used archival photographs working on the monument. The composition appeared thanks to the sponsors of 15 Tyumen enterprises.
Unfortunately, the monument is made of glass, plastic, but such a historical figure deserves a solid monument, at least bronze. Rasputin was a believer, and many of his prophecies come true. He was a real saint, brutally murdered 30 December 1916. All the legends that go of him – no more than a fairy tale, invented by enemies to defame.
END_OF_DOCUMENT_TOKEN_TO_BE_REPLACED 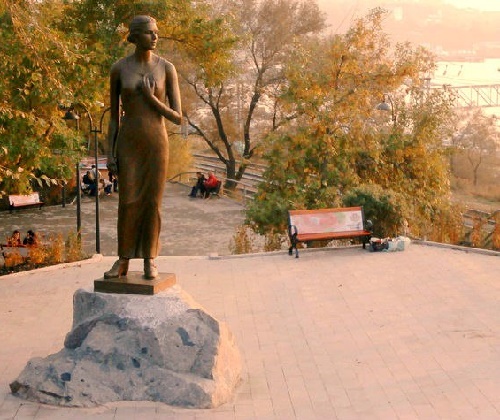 World Famous Song Katyusha Monument
Actually, the monument embodies women of the Soviet Union longing for their absent beloved, who has gone away on military service during the war. Pretty Russian girl from popular wartime song “Katyusha” appeared in Vladivostok thanks to a local historian Nelly Miz. She shared the idea on the Web and the local intelligentsia strongly supported her. St. Petersburg based artist Konstantin Novikov created a sketch, and Kemerovo based sculptor Ivan Kulakov made the monument.
In fact, the prototype of this monument, as well as the girl from the song was Katya Alexeeva (nee Filippova), a border guard’s wife. Matvey Blanter and Mikhail Isakovsky have created a great song after meeting with her. By the way, Katyusha is the Russian equivalent of Kate, or Catherine.
END_OF_DOCUMENT_TOKEN_TO_BE_REPLACED 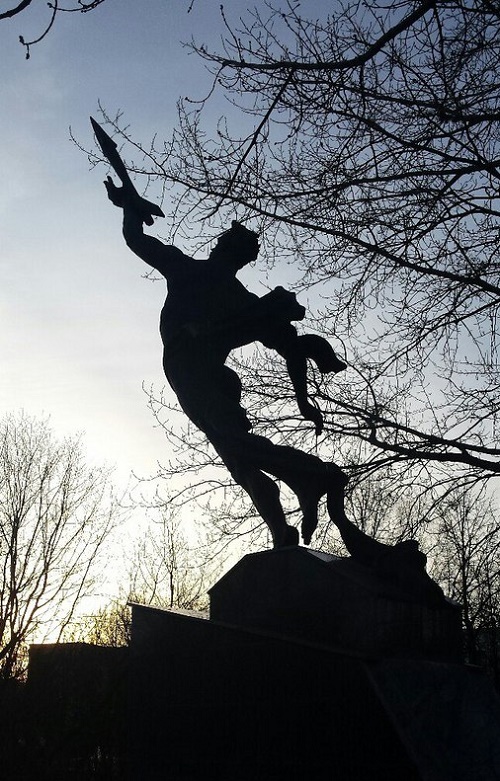 The Sculpture “Towards the Stars” has been installed at the main entrance to the Catherine Park (then park of Central House of the Russian Army) in 1958, a year after the launch of the first artificial satellite of the Earth and the three years prior to the flight of Yuri Gagarin into space. Like Prometheus carrying fire to mankind, the sculpture depicts a young, half-naked and powerful titan in a loincloth. Like a flare into the sky, he launches a missile that rushes into the infinite blue sky toward new discoveries and adventures.
END_OF_DOCUMENT_TOKEN_TO_BE_REPLACED 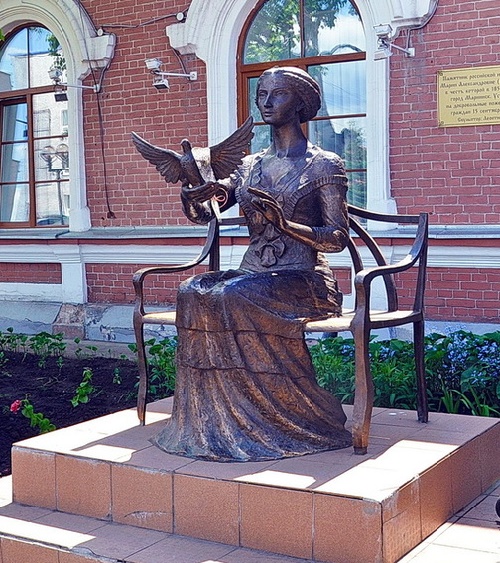 Russian Empress Maria Alexandrovna monument appeared in a small Siberian city of Mariinsk, on September 15, 2007. The author of the monument, Tomsk sculptor Leonty Usov created it on voluntary donations from individuals. The Empress sits on a bench and holds a dove in her hand – a traditional symbol of peace and the Holy Spirit. The bench has a place, specially left for those wishing to have a picture with her. By the way, the city got its name in honor of the Empress in 1857. Born Marie of Hesse and by Rhine German princess, became known in Russia as Maria Alexandrovna, the first wife of Emperor Alexander II. In addition, in Mariinsk there is also a bust of Emperor Alexander II. Besides, Mariinsk is the only town of Kuzbass (Kemerovo region), which the Russian Emperors have ever visited.
END_OF_DOCUMENT_TOKEN_TO_BE_REPLACED 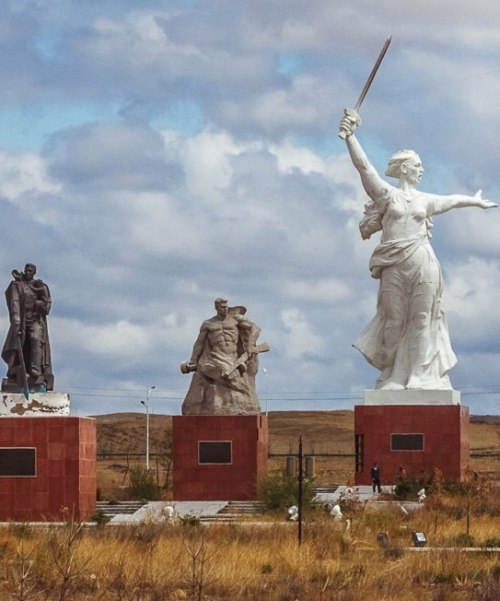 Eastern Europe Monuments Park in Manchuria, that is in the northern China, on the border between China and Russia. Despite its name, the park exhibits copies of exclusively Russian monuments and sculptures. Among them are copy of the famous monument by Vera Mukhina “Worker and Collective Farm woman”, Bronze Horseman (copy of the monument to Peter The Great in St. Petersburg), copy of the Volgograd monument “Motherland Calls”, the monuments of famous Russian poets and writers such as Pushkin, Turgenev, and others. In the evening the sculptures are illuminated, the classical music and music of Soviet authors is played, that adds a special effect to the sculptural park in Chinese Manchuria.
END_OF_DOCUMENT_TOKEN_TO_BE_REPLACED